An Ode To Joy in Black and White 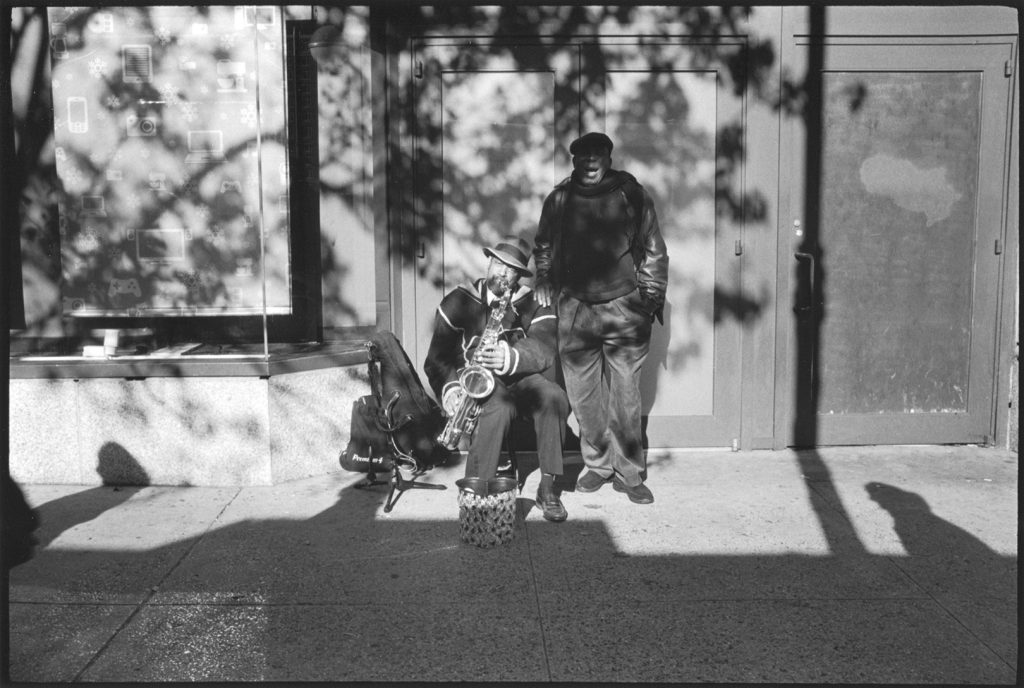 This is how William Meyers begins his photographic musical odyssey in New York City, his ode to music in black and white.

I grew up with black and white photos, movies, which were then known as the “pictures.” My childhood family photos are all in black and white. Although the world itself is multi-colored, images in black and white somehow still seem more authentic, more serious, more artistic, more personal, than the best technicolor photos.

I once viewed the past only in black and white, in photos by Berenice Abbott, Ansel Adams, Eve Arnold (I worked for her husband), Margaret Bourke-White, Brassai, Robert Capa, Henri Cartier-Bresson, Dorothea Lange, Mary-Ellen Mark, Gordon Parks, and James Van Der Zee.

I haunted the Thalia and Paris movie theaters in the early nineteen sixties to travel the world through black and white films. Who can forget Bergman’s  Persona, (which I used to teach in my Women’s Psychology course), De Sica’s  Two Women, and The Bicycle Thief, Fellini’s  Nights of Cabiria,” Satyajit Ray’s  Pather Panchali,” Tony Richardson’s  A Taste of Honey,” and Trauffaut’s  400 Blows” and  Jules and Jim?

And here is William Myers who still photographs the world in black and white—and he does so with enormous sensitivity. A former Navy man and a business man, Meyers is also a playwright, a critic, and a photographer, whose work is archived at the New York Public Library, the New York Historical Society, and the Museum of the City of New York.

Meyers is also the photography critic for the  Wall Street Journal, and has published articles at  Standpoint, Commentary,  City Journal, and elsewhere. He is also the most genial of hosts at Sabbath meals. Luckily, his wife, Nahma Sandrow, my dear friend, the opera librettist and Yiddish translator, has a lovely singing voice. As her husband admits, he cannot carry a tune.

But, oh can he take a photo! And oh how he loves music. Music first “awed” Meyers when he attended the Newport Jazz Festival in the 1950s. He writes:

“All the jazz greats played, and since they were performing not just for the paying audience, but for their peer, they shone. The courage, sophistication, ebullience, and nonchalant seriousness of jazz musicians is my model for all artistic performance. At the end of his sets, when the supremely elegant Duke Ellington turned to the audience and called out: ‘I love you madly,’ I believed him.”

He has memorialized how people in Manhattan, both uptown and downtown, and in the outer boroughs (Brooklyn, Queens), make music, listen to music, audition for roles in musicals. He is indiscriminate, Meyers loves all kinds of music: jazz, pop, classical, opera, musical comedy, but his photographs are not of celebrities but mainly of unknown musicians, piano and harpsichord tuners, buskers on the streets and in subway stations (when the stations were safe), immigrants from every place on earth as well as locals who sing, drum, strum, and dance.

Meyers has returned New York City to us as it was in the years before the pandemic—a lifetime ago. In his words, “people have always made music because they are driven to it to express their souls.”

And through his photographs, here we are, back in 2000, at a church concert on the upper west side; in 2004, at a Georgian operetta in Queens; in 2005, at a klezmer concert in Brooklyn; and between 2006 and 2017 at Cafe Vivaldi in Greenwich Village, at a Jazz concert in Symphony Space, at a Latin Disco, at the Ukrainian Cultural Center, at a Czech National Day performance, at the Irish Arts Center, in Central Park, in Harlem, in a recording studio in Hell’s Kitchen, and in living rooms.

Some photos are now imprinted on my heart: That of a drummer in the Union Square Station, performing in magnificent ecstasy. A guitarist and a crowd  in Washington Square Park—and we are there, where the summer sun sparkles, and we, the People are at our lazy ease.

Thanks for the memories.

PrevInterview with Christine Douglass-Williams on the State of Freedom in Canada
Michael Rectenwald: “An open avowed plan to bring about a global reset of the world’s economy”Next