An Unfortunate Outcome At Cargill 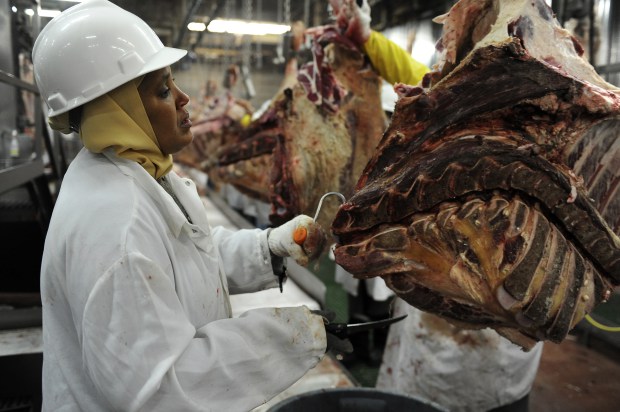 DENVER (AP) — A big U.S. meatpacker has agreed to pay $1.5 million to 138 Somali-American Muslim workers who were fired from their jobs at a Colorado plant after they were refused prayer breaks, a federal anti-discrimination agency said Friday.

Every reasonable effort was made to accommodate these workers, but with a 24-hour round-the-clock schedule, a processing plant cannot continue efficiently if dozens of its workers suddenly disappear for a prayer break, or two, or three, each workday. They were “fired from their jobs” precisely because they refused to do their jobs, unless and until their prayer breaks were permitted.

Wichita, Kansas-based Cargill denies wrongdoing but agreed to settle to avoid further litigation, the federal agency said. The dispute dates back to the firings of the workers in late 2016 after management rescinded policies allowing Muslim employees to take short breaks for prayer.

Why did Cargill rescind its initial policy of allowing Muslim employees to take “short breaks” for prayer? It was not a sudden display of bigotry. Rather, Cargill’s managers learned from experience that those “short breaks” for prayers took, on average, between five and eight minutes for saying the prayer, depending on the suras that the individual Muslim chose to recite. In addition, time was spent — how much time? — getting to and from the place where the prayers were recited. Would two minutes going to, and two minutes coming from, the place of prayer in the giant Cargill plant, be about right? A total of ten minutes, then, would be a low average for each prayer. That is one thing that might have caused management to rescind its policy. It might earlier have been relying on the employees assuring Cargill that “these are very short prayers, they will take no time at all,” only to discover differently.

A second consideration for Cargill was the effect of those prayer breaks on the smooth functioning of the line of meat to be processed. Perhaps these prayers  turned out to be a much greater disruption of the meat processing than Cargill had initially assumed. Cargill’s change in policy about prayer at work, if it was — as it certainly seems to have been — prompted only by a concern for the smooth operation of the business, should have been allowed given how long, and how frequent, those prayers were.

Consider, too, not just the effect on the workings of the processing plant if Muslim workers were allowed to leave their places on the line, and disappear for 8-10 minutes. What happens to the line that is supposed o be in constant movement? Does it slow down, or is it shut down, until the Muslim workers return? How is this handled? And what is the effect on the other, non-Muslim workers whose activities are disrupted? And it’s not just the disruption in the processing line. There is also the harm done to company morale if the non-Muslim employees, who are not given time off for prayers, begin to resent what they see as privileging the Muslims, three times a day, over all other workers. This would likely not have been understood at first by the Cargill managers. But eventually they would realize that a three-times-a-day prayer break for Muslims unsurprisingly caused resentment among non-Muslim workers. This resentment of one group of employees by another group is not good for productivity.

In 2017, the agency found that the workers had been harassed and discriminated against for protesting the unannounced policy change that denied them opportunities for obligatory prayer. Hundreds of Somali-Americans work at the plant in Fort Morgan, northeast of Denver….

Like other U.S. firms that employ Muslim line workers at meatpacking and processing plants, Cargill managers must balance religious accommodations with demands of processing meat in an operation that frequently runs 24 hours. Managing possible disruptions not only slow production but can create safety issues for line workers.

This paragraph is certainly key, for it describes the need to balance religious accommodations with the demands of the business. The right to pray at work is not absolute. The question is: what is the nature of those disruptions to the business? How long do they last? How many of them are there? And what is the ability, if any, of the employer to cope with a slowing of the production line? It is most unlikely that with so many workers going on prayer break that the meat processing line could continue to move at the same speed as before. Furthermore, not only is each break about 8-10 minutes long (5-8 minutes for the prayer, 4 minutes for getting to, and returning from, the prayer space), but the Muslim workers will take such a break three times during an average workday, assuming they arrive after sunrise and leave work  before sunset. Finally, we would  want to know how serious are the “safety issues” created by workers leaving the processing line, and returning to it three times a day.

“Providing our employees with religious accommodation is an important part of engaging and supporting our employees, and our policy has remained consistent for more than 10 years,” Cargill Meat Solutions president Brian Sikes said in a statement.

Notice that in its settlement, Cargill did not admit of any wrongdoing. That is, it felt that it had made a sufficient case for the business need to keep the line running smoothly, and believed that it had proven that the disruption resulting from these prayer breaks was sufficiently extensive, given how meat processing plants work, to justify Cargill’s decision to not permit them. Cargill settled out of court because it estimated that the cost of dragged-out litigation would be too high, with no assurance the company would win.

The Council on American-Islamic Relations, a Muslim advocacy group, and Qusair Mohamedbhai, a Denver attorney who represented the workers praised the settlement.

Well, of course they did. Today Cargill, tomorrow the world.