Around the Mosques by Ed Husain. Some observations. 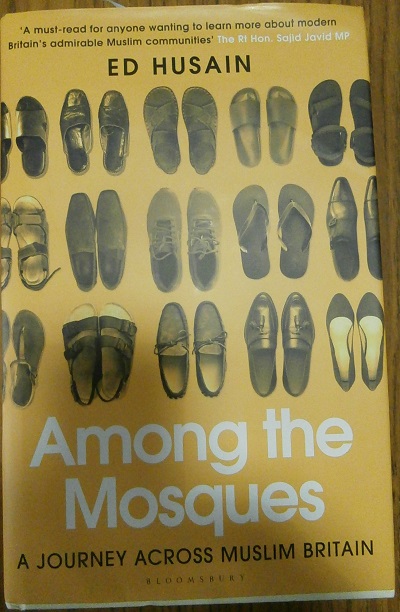 I don’t do proper book reviews because I don’t have the training. Usually I write enthusiastically recommending something I read and liked, or found useful. When I ordered my copy of Ed Husain’s Around the Mosques last momth, and linked the Daily Mail report on its contents I did say I’d post on the subject once I had read it.

I read it, and cogitated. Then watched some football, and cogitated a bit more, pondering what to make of it.  These are observations, nothing more.

Much hinges on what to make of Ed Husain. Born in East London, heavily influenced in youth by radical jihadist thought, he studied at SOAS and was mentored by the great Sir Roger Scrutton who died last year. Turning from Jihad and expressing concern at the path Islam was taking, in 2007 he founded the organisation Quilliam with Maajid Nawaz. Quilliam was wound up in April, citing the difficulties of operating during the pandemic.

Ed Husain renounced and denounced violent jihad, but at first some wondered whether he was still working for the eventual supremacy of Islam, the slow jihad. I couldn’t make up my mind.

If he is telling the truth in this book then he isn’t. If he is practising taqiyya then not.

It’s a terrible thing taqiyya; my natural instinct is to meet any man or woman of goodwill with pleasure. The concept of taqiyya sullies trust.  For the purposes of this book I’ll take him at face value.

I don’t need to write more on the Chapters about the worrying mosques, Bradford, Blackburn, Dewsbury/Savile Town and the rest and the effect they have had on the districts they dominate; my post after the Daily Mail report is quite enough. Two further observations.

The twitterati reaction to the Mail report largely centred around mis-reporting what was written in the Mail, not the original comments in Husain’s book. The existence of no-go areas was denied. They couldn’t bring out a white inhabitant of Savile Town as there aren’t any. Or, they are less than 40 in number and they keep a low profile. But there are a few in Bradford and their very existence apparently refutes the unease everybody else feels about the area.

Neither Husain nor the Mail said that Didsbury in Greater Manchester is a ‘no-go’ area. Didsbury is a prosperous, rather arty area, little independent shops and galleries, delicatessens, the trendy bourgeoisie. The book and the report pointed to the district’s one mosque, the one attended by the Abedi family responsible for the Manchester Arena bomb murders.

Later during his visit to Greater Manchester he meets two Muslim women, friends of his wife. They all took their A-levels at the same college in East London, and then both women married Muslim men from the north of England. One of them was a Sikh or Hindu and converted. They discuss those mosques where women are not allowed in to pray and have no role in  mosque life. This is an extract:

“In Bolton, Dewsbury, Blackburn, Preston, it’s a different universe.  Women don’t work. Most of my cousins are at home looking after their husbands…The mosques there don’t allow women to pray.”

“It’s worse than that, we paid for the building of the mosque. They asked us to sell our gold to build the Zakariyya mosque in Bolton, and now they refuse to let us in.”

“You went to Dewsbury? … That was brave! I’m impressed. I wouldn’t go there unless I really, really had to visit.”

That is a Muslim woman talking, that even she considers Dewsbury to be a no-go area.

Second the one chapter that does tell of something new to me is Chapter 7 when he visits Belfast. I don’t write much about Northern Ireland; it’s a complex and delicate area about which I have no background, no experience and no history. I know no more than anyone reads in the newspapers. Ed Husain also feels strange and slightly daunted.

Yet he gets a better welcome there than in many other places. The Belfast Islamic centre is situated among public buildings and houses; it isn’t obviously a mosque and has no signage. And he finds that it is run by two women, both outgoing and confident. The building is too small for the very mixed (42 different nationalities) congregation so prayers are done in several sessions.

One of the women told him of their efforts to fundraise in England for bigger premises, as they are aware that some English mosques are big and impressive.

“…the Muslims there always ask us if we are Barelwi, Deobandi, Salafi or from the Islamic movement (polite reference to Islamists). We’re a mixed bunch here and we try to hold everyone together rather than fight on sectarian grounds. And so because we can’t answer their questions we can’t tap into the wealth of Muslims in England.”

The local preachers and community leaders in Northern Ireland are assertive and don’t care about giving offence (to put it mildly). I know from reading elsewhere that the Jewish community in Belfast face hostility.

The Muslims have been attacked by one hell fire and brimstone Protestant preacher who declared Islam to be a “Satanic religion spawned in Hell”. Other hellfire and brimstone types have tried to get the Muslims of the mosque on board in their campaigns against abortion and the LGTB movement. The mosque has managed to keep out of that.

Another interesting thing about Belfast is that the Imam is a properly certified marriage registrar. When he conducts a nikah it is a legally documented marriage, properly constituted in British law. Just like a wedding conducted in the Church of England (and other religious buildings, but this is the first mosque I have heard of) Unlike nikah ceremonies in England where the couple are not lawfully wed unless they have also been to the Register Office for a legal civil wedding. Which means that if the partnership breaks down the woman is entitled to nothing in English law, and only what the Sharia court will allow her, (probably b*gg*er all) or her father negotiated for her prior to the ceremony. Too many women don’t realise that their nikah ceremony is nothing in law, and they are not lawful wedded wives.

In the Chapter dealing with visits to mosques in London his reaction to the self-flagellation of a Shia procession during Ashura, mourning the martyrdom of Mohammed’s son-in-law and grandsons is interesting.

Throughout the book he praises the positive aspects of Islam and the Muslim life as he comes across it. He is always quoting and debating the more edifying parts of the Koran and the life of Mohammed. He obviously loves his faith and wants it to flourish.

He comes up with a statement in his conclusion. He writes of the fine qualities of the Protestant Christian ethic (I don’t see these as specifically Protestant, more Judeo-Christian) that have moulded modern Britain. He says the God shaped hole in our souls cannot be left empty. He admires the essential Christian message, and says that by discarding our Christian inheritance we alter the country for the worse. Moreover, if we celebrate that inheritance and bolster it in public life then the mosques will follow. Without it, he writes

“caliphists, communalists (ie that aspect of Islam that snuffs out the individual and fosters the obedient hive mind) and clerics will sniff weakness’.

I take this to mean that Ed Husain has realised that the Islam he wants, that ideal of a Religion of Peace, of spirituality, ethical behaviour, love of God and love for all (as the Ahmadis teach), isn’t achievable without checks and balances from outside the religion. Left to its own devices, to self-regulate, it will always veer towards the later chapters of the Koran. The doctrine of abrogation overrules the peaceful sections and replaces them with the violent ones.  That is my interpretation of his conclusions, and what I believe he is thinking, but dare not speak openly. Or not yet.

PrevAs If it were Yesterday. Brooklyn, 1952
Evil Huddersfield grooming gang trio guilty of raping schoolgirl with attacks in her bedroom and school playgroundNext