Around the World in 18 Minutes 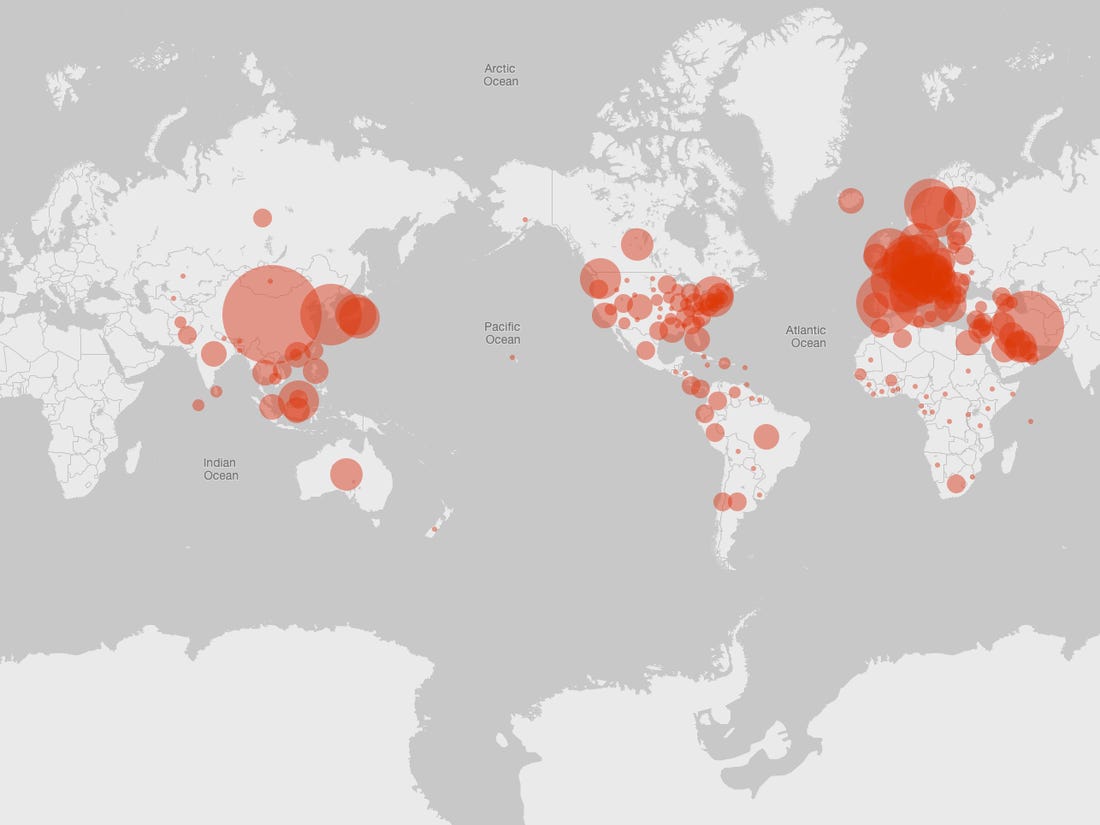 There may be troubles ahead, there may be teardrops to shed, but while there are brilliant medical professionals for us, let’s face the music and maintain our social distance.

While the nations of the world are coping with the pandemic, Covid-19, which has affected the population of the whole globe more quickly than any previous event, the widespread debate about the origin and reasons for the spread of the virus continue. Unfortunately, the predictions, the motivations, fears, and preoccupations of individuals, and the models used for explanation, fall short of what would be desirable. Noticeably, three factors are evident. One is the lack of accuracy of information. Dr. Anthony Fauci has expressed doubts about the low level of Covid-19 cases and deaths reported by China, even after it “revised” and increased its death toll numbers by 50 per cent. A second factor is that some peoples and nations are better equipped to deal with the formidable challenges than others.

The third major factor is the acute disagreement on coping with the impact of the virus, not only in medical terms, but also in assessing the severe political and economic consequences. Medically, there are differences over issues such as the hope that hydroxychloroquine will be a game changer in providing treatment of Covid-19. Politically, the U.S. must tackle the intricate problem of the exact powers of the federal government and the respective power of the states. An innate problem is whether the extra powers being used pose a threat to constitutional authority. Economically, the U.S. and the rest of the world have the dilemma of  restarting the economy and getting people back to work as quickly as possible in the face of the biggest economic disaster since the depression of the1930s, and the warning of the IMF  that global output per head will contract by 4.2 per cent this year, that public debt will increase substantially, and that almost all countries will  experience negative growth in real domestic product per head. Socially, the new “normal” means we will all be more “online” than previously. There is no going back.

It is instructive to take a quick tour around the world and notice the responses to the virus. Music has been used to comfort populations in many countries. Andrea Bocelli, Italian tenor, on Easter Sunday April 12, 2020 gave a concert inside the Milan Cathedral and outside in the empty Duomo piazza for 25 minutes. In the video later seen by millions he performed a number of offerings, appropriate to the day and to help people cope, among them, Amazing Grace, Ave Maria and Panis Angelicus. A less well-known English soprano named Phoebe Haines, on April 15, 2020 also sang a rendition of Amazing Grace, as well as You raise me up, from the balcony of her home in East London. An unnamed citizen in a town in north England played a rendition of Over the Rainbow on his saxophone in the street in tribute to medical staff. Citizens became pop performers from their homes and gardens in a number of Italian cities.

In the UK a police report indicates that crime has fallen 28% since lockdowns in the country came into force, as shown in the sharp decline of burglary, vehicle crime, serious assault, personal robbery, rape, shoplifting, though there was an increase in antisocial behavior. Government in the British political system has remained steady and active despite the infection from Covid-19 of Prime Minister Boris Johnson who is still recovering and resting at Chequers, the manor house in Buckinghamshire, the country home of serving prime ministers since 1921. The fortunate Johnson had his usual weekly audience with the Queen via telephone.

One unfortunate result of the virus is that it caused The Jewish Chronicle, the oldest continuous Jewish newspaper, founded in 1841, to go into voluntary liquidation, due to the collapses in advertising and decline in print sales. The JC reflected diversity of Jewish religious and political opinions.

The Queen, Johnson, and Britons in general were lucky in being spared what would have been the innumerable photos of the first birthday party of Archie, son of Harry and Meghan. That party has been ruined by the virus. It was to have been a celebrity affair attended by the usual Hollywood suspects, but now deprived Archie will have to spend the occasion alone with his parents and security guards in their rented villa facing the ocean in Malibu.

Another ocean town, Tel Aviv, is without a prince but still has the same prime minister. On April 15, 2020 opposition leader Benny Gantz lost his chance of becoming prime minister in a power sharing coalition government with Benjamin Netanyahu to deal with the coronavirus. Now the country has a 21-day period in which the Knesset can vote to nominate any candidate to become prime minister. If they are not successful, Israelis will go to the ballot box for the fourth time in a year. Otherwise things do change in Israel. More successfully, Israeli authorities have agreed to allow minibuses, carrying 19 passengers, to run on the Sabbath, Friday night and Saturday, despite the opposition of the ultra-Orthodox. The majority of Israelis favor buses, which are free, running on the Sabbath, as long as the routes avoid areas where there is a religious or ultra-Orthodox majority.

In Paris, the virus has meant that restoration of Notre Dame Cathedral has been suspended. About 100 people, technicians and workers, have been active on the site, which is now silent apart from a security team guarding the entrance. Nevertheless, on the first anniversary of the fire that destroyed the entire roof and part of the choir and nave, the bells of the Cathedral on April 15, 2020 rang out as tribute to the French medics fighting the virus. However, the virus means a delay in the rebuilding and restoration of the 850 year landmark, symbol of the resilience of France. Yet, President Emmanuel Macron is insistent that Notre-Dame will reopen within five years largely because France is due to host the Olympic games in 2024. Critics point out safety rules and necessary precautions might prevent the reopening at that time.

However, in France the Tour de France is not being cancelled, but has been rescheduled to August-September. One wonders if this is a recipe for disaster for the would be 170 riders, and the hundreds of staff, security, and medics who will attend.

It is a minor mystery why Kim Jong Un, ruler of North Korea, for the first time did not attend the ceremony at Kumsusan Palace of the Sun, though many senior officers appeared at the wreath laying ceremony, commemorating the 108th anniversary of the birth of his grandfather Kim Il sung, founder of North Korea. Speculation abounds. Was it for security to avoid the virus since the 36 year-old Kim is a heavy drinker, smoker, obese? Or was it a demonstration of social distancing, or delivering a political message to end the “cult of personality” regarding the ruling dynasty? Perhaps Kim prefer to see himself as a modern, competent leader emphasizing his own authority since he inherited power in 2011, rather than merely a descendant of his grandfather.

In Germany the Oberammergau Passion Play for 2020 has been cancelled. The play results from a response to an earlier pandemic , the bubonic plague in Bavaria in 1633 in which a quarter of the population died. The survivors promised that if they were spared they and their descendants would stage a Passion Play every decade. This promise has been fulfilled until now. The five-hour play, with an intermission of three hours, in the village of 5000 people portrays the suffering, death and resurrection of Christ. Put on for five months in an open air theater, it has attracted thousands who also enjoy the shops, restaurants and hotels in the area. But there have always been indications of antisemitism. Although changes, and moderations of language were introduced in 1990, when Jesus was portrayed as Jewish for the first time, the deicide charge inherent in the play leaves the implication that Jews were responsible for the crucifixion, and negative images of Jews remain.

The virus has also caused a change in Russia. President Vladimir Putin postponed the parade due to take place in Red Square, Moscow on May 9, 2020, a ceremony honoring the victory of the Soviet Union in the “Great Patriotic War,” June 1941-May 1945  in which  26-30 million  died. For Putin this is particularly important. About 1.5 million civilian and soldiers died during the siege of Leningrad, one of the longest in history, which was blockaded by Nazi Germany for 872 days, September 8, 1941 to January 27, 1944. Leningrad, now St. Petersburg, is the town in which Putin began his political career as deputy mayor.

A third postponement caused by the virus is the Conference on the Future of Europe planned to be held in May by the EU at the suggestion of President Macron. Its intention was to invite national and local European leaders to participate in a Europe wide discussion. It would have been significant because a major issue would have been, as it is now in the U.S., whether health issues should be the responsibility of the member states or the wider political body. The problem is similar to that in the U.S. Can the member states recover on their own, or is a united effort led by a centralized government essential? In any case, will the medical professionals of the world put on some speed, follow the lead of the experts, and realize the need for someone to watch over me?