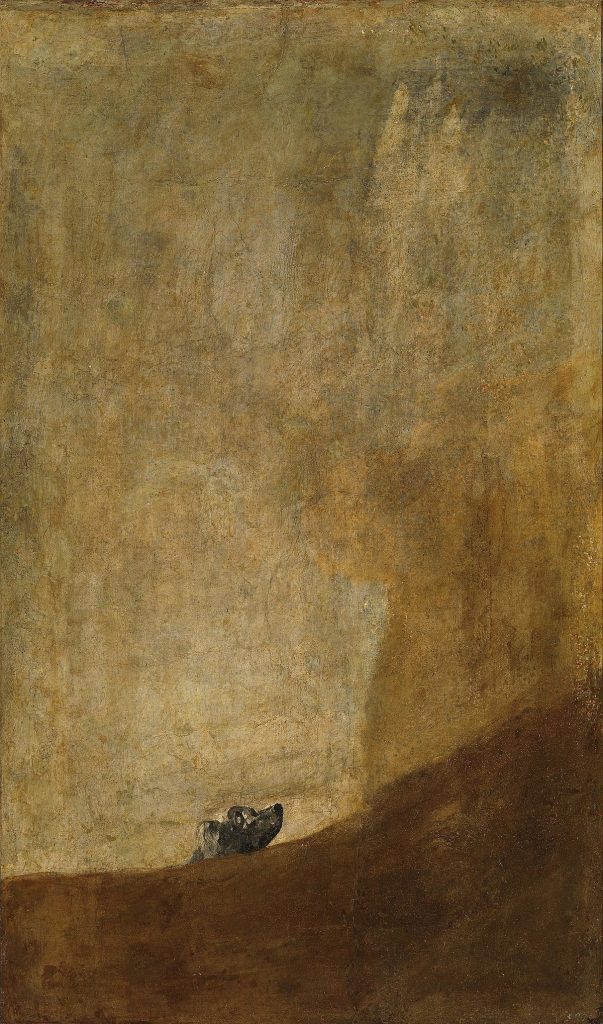 When I heard the distant sound of Judy’s high-pitched bark I glanced over at my brother. He looked back at me and without saying a word to each other we knew she had escaped. We rushed out into the third-floor hall to look for her, but she must have gone down to the second-floor. We ran down the stairs and there she was, in the attack mode, with Mrs. Tar as her victim.

It was a standoff with Mrs. Tar waving her cane back and forth and Judy jumping and barking like crazy, looking for an opening to take a nip out of Mrs. Tar. My brother quickly snatched up Judy and I tried to comfort Mrs. Tar; walking her to her room and telling her Judy wouldn’t hurt anyone; but that wasn’t completely true. Judy could be one mean girl.

Judy lived with my grandparents in a 1930s hotel that my grandfather owned in Hanford, California. My grandparents lived in a converted apartment on the third floor of the hotel. My brother and I would stay with them often. Judy was without question a very spoiled house pet that was not allowed to leave my grandparents apartment, except for supervised ‘short leash’ walks.

When my brother and I walked Judy, we always kept her away from people, and especially other pets, because she would quickly pick a fight. It was embarrassing to walk her because we were constantly holding her back from attacking anything that moved. Even when we would take her on the roof of the hotel, we had to hold the leash tightly because she would leap into the air trying to catch pigeons. I think she thought she could fly.

She was a chubby little thing with short tan fur, antenna ears, and a curled-up tail. At most she was ten pounds. Around my grandparents, brother, and myself, Judy was so sweet. She would sleep, eat, and demand our attention always and she loved to lay on her back and have her tummy rubbed.

Judy ruled the third-floor hall and occasionally the second-floor hall. She was not supposed to be in the hall, but she often escaped from my grandparent’s apartment. You could always tell when Judy was on patrol in the hall because it was easy to hear that sharp high-pitched bark as she assaulted hotel guests going to and from their rooms.

Mrs. Tar was a widow who lived in the hotel on the second floor with a few other retired folks. She was always nice and polite but kept to herself. Mostly she sat in the hotel lobby, in the same chair, smoking and watching guests check in and out and other activities.

My brother and I would always be doing something around the lobby, such as, dumping ash trays, dusting, carpet sweeping, and cleaning mirrors. Jack, the know everything, could do everything, handyman, for the hotel, would closely supervise everything we did, which would add to Mrs. Tar’s lobby entertainment.

We liked to play tricks on Jack, which I think Mrs. Tar enjoyed. One trick was to slightly rearrange the furniture in the lobby when Jack wasn’t looking or on a fix-it job in the hotel then watch his reaction as he noticed something was out of place and would then meticulously put things back in their perfect order.

Once we completely switched around two sofas that were facing each other, then unintentionally a guest sat down on one of the sofas. When Jack spotted this, my brother and I could hardly control ourselves. And what made this especially funny was that the guest dozed off for a while which meant that Jack had to control his need for absolute order. Jack paced back and forth with a side eye on the guest and once he woke up and left Jack put the sofas back in their exact places. It was fun tormenting Jack because he never showed any emotions; no slight grin, no frown, and not one word.

I think Mrs. Tar liked my brother and I because we always helped her with anything she needed including running any errands. We liked getting cigarettes for her because we would always open the pack for her and borrow one or two. I don’t think she minded. She was a great tipper so we loved to do what we could for her.

My brother and I knew that Judy posed a special threat to Mrs. Tar. because she didn’t move too swiftly. Being a widow, she always wore all black including a hat with a lace vale over her face. Seeing her walking down the dimly lit second floor hall from a distance was spooky. This may have added to Judy’s wrath, but it didn’t seem to slow Judy down one bit.

When Judy did get out, she rarely would leave the third-floor. There were plenty of guests for her to harass there, and as an extra bonus she loved to attack the third-floor maid, Mildred. I would notice that Judy’s ears would perk up when Mildred rolled her cart by my grandparent’s apartment. Her little lips on both sides of her face would come up a little showing her white teeth and pink gums.

Several times Judy attack Mildred and occasionally would trap her in a room she was making up. Once we caught Judy in a battle with Mildred with Mildred tossing towels and sheets at Judy which Judy swiftly dodged looking for an opening. And no way was Mildred, or anyone going to slow down or capture Judy because she was too agile and fast. Fortunately, for Mildred and hotel guests, her barking was always the alarm that would bring my brother and I to the rescue.

I must admit my brother and I got a kick out of Judy’s fierce behavior, and then felt like heroes as we saved the situation. But for Mrs. Tar, and some of the other elderly guests that lived in the hotel, it was a different story. But they mostly lived on the second floor, so we were not that concerned.

Sometimes when Judy would escape, she would sit by the stairs near the elevator waiting for a subject to attack, like she was stalking her prey. Her ears would poke up in full receiving mode and her short little pointed snout would be sniffing in all directions including down the stairs.

Judy was not afraid of the elevator because we always took her in it. Sometimes my brother and I would put her in the elevator by herself then run down the stairs to the lobby and press the button to retrieve her. She would bark all the way down as if to say hurry up. It was important, however, to snatch her quickly when opening the lobby elevator doors; otherwise, she would attack anything that moved.

This elevator joy ride backfired one day with Mrs. Tar the recipient of Judy’s on-slot of terror. As usual I put Judy in the elevator on the third floor and quickly rushed down the stairs, but as I was running, I heard the motor of the elevator moving. I figured someone in the lobby pressed the button and I knew I could outrun the elevator to the lobby, which I did. But when I got there the elevator had stopped on the second floor and I could hear the doors opening. This was not the way this was supposed to go.

First, I heard Judy’s barking, then a loud moaning and some banging. Quickly I deducted; it’s the second floor and around 5:00 pm, that’s when Mrs. Tar goes out to dinner. I rushed back up the stairs to the rescue but somehow, they both were in the elevator together and the doors were closed. Judy was going crazy growling and barking, which was more intense because of the echoing effect of the elevator shaft, and I could hear Mrs. Tar’s cane hitting the metal sides of the elevator as she tried to fend off Judy. What must have happened is that Judy jumped out of the elevator when Mrs. Tar opened it, then to get away from Judy, Mrs. Tar must have slowly stepped into the elevator, and as she closed the doors Judy dashed back in with her.

When I got to the basement elevator doors, I opened them up quickly and there Mrs. Tar was standing in the corner with Judy in the other corner barking and growling. I promptly reached down and snatched Judy, then stepped backwards out of the elevator. As I was closing the doors, I glanced at Mrs. Tar but couldn’t see any expression behind her veil. Her cane was raised a little in what look like a fencing position. I don’t think Judy could have gotten by that cane without a good whack from Mrs. Tar.

As I walked away, I heard the elevator leaving the basement, so I assumed Mrs. Tar pushed the lobby button. It’s hard to tell what kind of expression dogs have but as I carried Judy through the basement, she looked at me with a kind of satisfied smile. I think she was proud of herself. We went all the way up the back stairs of the hotel to her third-floor apartment.

I hurried back downstairs to find Mrs. Tar to see if she was all right and apologize the best I could, but she had already gone for her dinner down the street from the hotel.

I waited for her to return and as usual opened the front lobby door for her. I said something like “good evening” or “how are you?” and as always, she nodded just a little.

I saw my brother shortly thereafter and he ask me something like “what’s going on?” We always had something to report to each other regarding our hotel antics, but on this occasion, I just said “nothing.”

Later I reminded my brother to make sure Judy didn’t get out. I told him she escaped earlier that day and was chasing a guest in the hall. My brother use to intentionally let Judy out, then play the rescue hero when she assaulted guest. My main concern was that Judy may have another go at Mrs. Tar, but I don’t remember Mrs. Tar and Judy ever meeting up again. It just may be that Judy met her match with Mrs. Tar. One thing for sure, there would be no more elevator joy rides for Judy.

Jerry Olivas is an original Californian with roots that go back to when his family arrived from New Spain, now Mexico, in 1781. He lives in Southern California where he surfs, caters to his two black cats, and writes articles about his many interesting adventures growing up and his travels. He attended university in East Sussex and worked in Milton Keynes, UK, spent time in Israel working on Kibbutz En Karmel near Haifa, worked in Vicenza and lived in Venice, Italy, worked in Catania and lived in Taormina, Sicily. Some of his articles can be found online at Short Éditions, such as, Mrs. Tar’s Hat with a Bat and Tracks and Pie.

PrevOne Man’s War against Technology, Humanity, and Himself
An Unwritten Parable [ΑΓΡΑΦΟΝ] by Angelos SikelianosNext