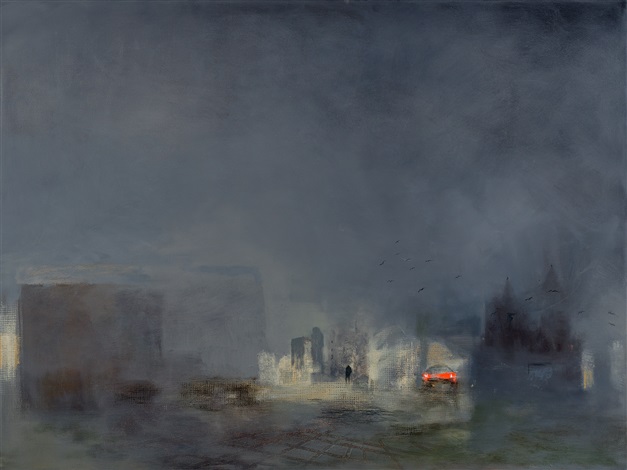 The clouds drop a heavy fog, pulling the sky down over the mountain,
and the fog crouches, squats over the city, waving its shrouded arms
threatening the tallest, most imposing feats of engineering with erasure.

The fog brings low the mutant-green glow of Desjardins Bank,
the Christmas-blue of the Jacques Cartier Bridge, the rose blush of Scotia Bank,
rubbing them all into the city’s face, smudging them in

with other indistinct lights: cosmetics and bruises, the sky done up
like an odiferous junkie after a full day of turning tricks, bumming cigarettes
and staggering around traffic to collect enough coin for another fix.

If the fog genuflected to the city’s third floor, it would collect every neon blaze
upon its breast, reflect, like one transfixed by smart-phone glaze,
the commercially distressed state of affairs afflicting this place.

Take the city for a massive, metahistoric, geological beast, lumbering along
at a timescale wherein a human life passes as briefly as a hummingbird pausing
to dip its beak into a flower: it suffers the barnacles of civilisation obliviously,

as we sustain the bacteria, the archaea, the fungi living out their dramas
among the Tigris and Euphrateses, among the Rubicons, the Volgas, the Gangeses,
the Nileses, and the Mississippis riverring among our resource-rich cells.

The way this fog hovers darkly, flying in near as a mirror brought in close enough
for self inspection, I wonder if the seer will recognise why this portion of the Earth
has lost the stars, whether this fog is prelude to some geological action

akin to a rubbing of the eye and perceive in myself an unaccountable wish
to feel the back of that grand hand, to have this murky vision cleared, and I wonder
how many others, yes, how many bloody-minded others are with me in this fog.

Asa Boxer’s debut book, The Mechanical Bird (2007), won the Canadian Authors Association Prize for Poetry, and his cycle of poems entitled “The Workshop” won first prize in the 2004 CBC Literary Awards. His poems and essays have since been anthologised in various collections and have appeared in magazines internationally. His books include Skullduggery (Signal, 2011), Friar Biard’s Primer to the New World (Frog Hollow Press, 2013), Etymologies (Anstruther Press, 2016) and Field Notes from the Undead (Interludes Press, 2018). Boxer is also a founder of the Montreal International Poetry Prize. He presently edits The Secular Heretic, an online magazine for the arts and sciences. And he appears in a weekly cultural video series called Daymakers (with fellow writers Marko Sijan and Marc di Saverio) in which he reads poems, conducts interviews with provocative thinkers, and participates in conversations on the arts and sciences.