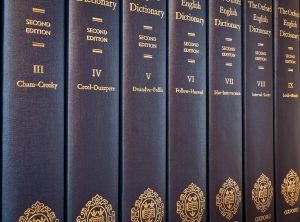 There’s a new heading for this column today, as the keen-witted, sharp-eyed and those who have nothing better to do will have noticed. I know I should have been put down years ago but I’m now 93, a condition that was almost unimaginably old when I was growing up. But whaddye know? So many millions of others have joined the oldest old that it’s become commonplace. The only surprise was that the candles cost more than the cake, as Bob Hope once said.

So instead of congratulating myself, I took pleasure in thinking back to a famous long-ago birthday surprise for Alexander Woollcott, drama critic of The New Yorker, that nowadays would surely land the perpetrators in jail for emotional abuse.

The notoriously greedy Woollcott had been hinting for weeks that the multi-volume Oxford English Dictionary would be the best birthday present his colleagues could give him, though even he could see it was prohibitively expensive. Yet here in front of him on the day were his smiling co-workers offering him a stack of volumes in Oxford’s unmistakable format.

I imagine him fondling the first volume, which covered every word in the English language starting with the letters A and B. Overcome with gratitude, he looked at the other volumes. All were A to B.

His life changed course in 1994 when his seven-year old son, Nicholas, was shot in an attempted robbery while on a family vacation in Italy. He and his wife, Maggie, donated Nicholas’ organs and corneas to seven Italians, a decison that stimulated organ donation around the world and is known as “The Nicholas Effect.” Reg wrote a book, also called The Nicholas Effect, which was the basis of the television movie, “Nicholas’ Gift,” starring Alan Bates and Jamie Lee Curtis. At 93, he continues to work full-time to bring attention to the hundreds of thousands of lives that have been lost because of the shortage of donated organs.