An Unusual Visit at an Irish Graveyard 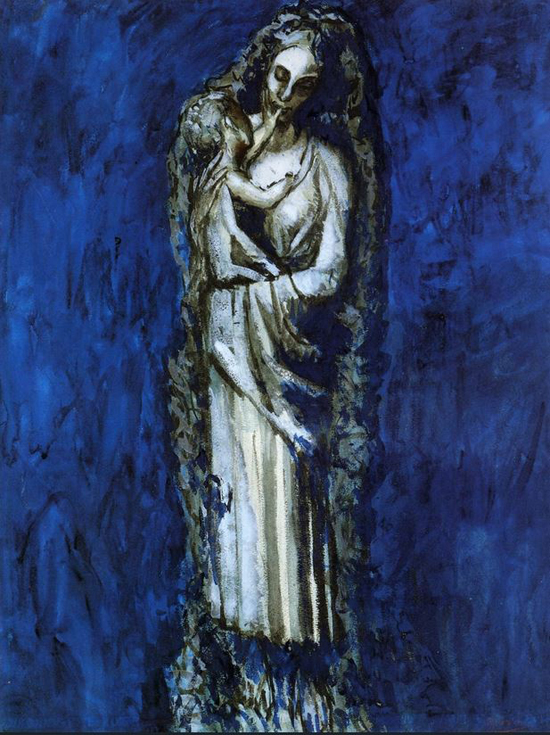 Some of the weirdest phenomena in the history of civilization are the alleged Marian apparitions, the most famous of which being in Fatima, Portugal, in 1917. But there have been other alleged apparitions throughout the world, from Ireland to Japan and beyond (a strange Irish report of one of them in a graveyard, I’ll come to later).

As for Fatima and those unfamiliar with the event: Briefly, according to most accounts, on Sunday, May 13, 1917, three children were pasturing their flock at the Cova da Iria, which was about a mile from their homes. They were playing when suddenly a bright shaft of light pierced the air. The children claimed that a lady spoke to them and said: “Fear not! I will not harm you.” “Where are you from?” the children asked. “I am from Heaven” the beautiful lady replied, gently raising her hand towards the distant horizon. “What do you want of me?” one of the children, Lucia asked. “I came to ask you to come here for six consecutive months, on the thirteenth day, at this same hour. I will tell you later who I am and what I want.”

She later predicted many major worldly events that would come true. I refrained from using the word “alleged” because I believe the Fatima incident to be true, a conclusion I reached after much research on the topic.

But little, if anything, is ever heard of the alleged Marian apparition in Wexford, Ireland, in 1971. Although there have been many “apparitions” in Ireland, some of them are approved by senior clergy or the Church, while others are not. (You can see a list of these “apparitions” on Wikipedia and other such sites. But the Wexford one seems to be forgotten.)

The story is about three young boys who claimed to have seen what appears to be visually like Our Lady in an Irish cemetery in a small town. Testament about the event was televised, on May 5, 1971, by the Irish State broadcaster, RTE, when the boys were interviewed.

The interview took place in a small village called Taghmon in County Wexford. In the early ’70s, the pace of life in the village was laidback with no more than a dozen people going about their shopping on the quiet main street. Once a week, there was the Thursday cattle market, the main social event for the villagers, particularly farmers.

According to an episode of RTE’s “Newsbeat,” a TV Irish current affairs programme, the reporter Michael Ryan said that the three boys said that the Blessed Virgin appeared to them at a cemetery in the village. The boys, Eric Fenlon, Gerald O’Sullivan, and Con Quigley, claimed they saw the apparition of a woman in blue, who appeared while they were playing at the cattle mart bordering a disused cemetery on the outskirts of the village. Two other children playing with them at the same spot saw nothing.

One of the boys’ mothers said: “My son and two other boys were playing down in the mart just near the cemetery and I don’t know how long they were there but he [her son] came in for his lunch; he was a bit late and very excited. I was getting the dinner ready and up to my eyes in work. And I said, come on in and have your dinner, what kept you? So, he said ‘Mammy, I saw the Blessed Mother, the Blessed Virgin, down in the cemetery;’ and I said, what cemetery? And he said the one opposite the mart. And I said you’re joking; you couldn’t have seen the Blessed Virgin; come on in and have your dinner.

“And, he went into the sitting room and he said, ‘Come here mammy and I’ll show you how I saw her’, and he knelt down, joined his hands and looked up and said, ‘I saw her like this but she wasn’t kneeling, she was just standing at a tree;’ and I said where did she go, and he said she just went up into a tree” [this was disputed by the boy who said his brother said this to his mother; maybe he meant a hedgerow].”

The boys said, although it was a dull day, the graveyard lit up and a ray of the sun beamed a ring around the graveyard and onto Our Lady, who was not at a tree but in the graveyard. They also described the “apparition” as being about five-foot to six-foot tall, wearing a blue dress, white shawl, veil on her head, and had a ring around her head and she was hovering about two inches off the ground. Her hands were folded in prayer and she was looking up. She never said anything. The “apparition” lasted about two minutes, according to the boys.

Local reaction to the “apparition” was non-committal. Most people agreed that the children saw something; they did not believe the boys were playing a prank. The clergy of the area did not give any comment on the matter, with the exception of the then head of the Department of Psychology at University College Dublin, the late Reverend Professor Feichin O’Doherty.

He said he wished the church officials in the Diocese of Ferns had given a statement about the alleged apparition in Taghmon from the outset. Rev O’Doherty also stated that no importance should be given to any apparitions, the sighting at Lourdes being the exception.

Rev O’Doherty added that those people claiming to have seen apparitions are not lying, but what they claim to have seen can be explained: In older age groups it is possibly a manifestation of an emotional disturbance. In younger ages groups, it is simply a case of their inability to distinguish between reality and imagery.

Is he suggesting the appearances could be some form of group hallucination? This is unlikely, as hallucinations are primarily personal subjective events, according to distinguished psychologist Dr Gary Collins. Collins wrote some fifty books and numerous papers on psychology.

In an interview with the American Christian author, Lee Strobel, in the book The Case for Christ, he said: “Hallucinations are individual occurrences. By their very nature only one person can see a given hallucination at a time. They certainly aren’t something which can be seen by a group of people. Neither is it possible that a person could somehow induce a hallucination in somebody else. Since a hallucination exists only in this subjective personal sense, it is obvious that others cannot witness it.”

For me, I’ll remain agnostic on the Wexford “apparition,” as there is not enough evidence to convince me that the vision the boys claim they saw was Our Lady. But the question remains: What was it that they saw?

PrevThe Legacy of Idriss Deby
Hebrew: The Transition of an Ancient Liturgical Language to a Modern VernacularNext