Book Review: Do We Need God to be Good? 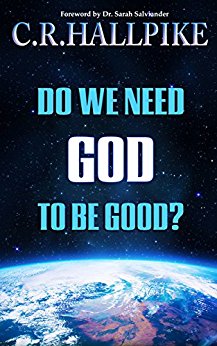 Do We Need God to be Good? by anthropologist C.R. Hallpike, is a stimulating book on some of the biggest questions of our time. Dr. Hallpike’s broad range of sociological, anthropological knowledge is put to good use after spending decades studying, and living amongst, many world cultures, both tribal and Western. But in the area of biblical studies and the moral argument, I would find some things to disagree with in this distinguished academic’s findings.

Many religious believers, of various faiths, hold the simpleminded view that morality can only be based on God’s commandments: murder, stealing, lying, and adultery, for example, are wrong because God says they are in the Bible, or the Koran, or some other scripture so that without God there could be no moral rules at all. Protestants, in particular, have maintained this, although many others including Nietzsche and Sartre have also believed that if God disappears from the picture then it’s a free-for-all and all hell breaks loose, or that we each have to make up our own moral code as we go along, which comes to much the same thing. But this clearly won’t do because if murder, stealing, and lying are only wrong because God has forbidden them, they would automatically become good if He changed His mind about them.

The confusion in the above is that God might change His mind. God won’t change His mind because He is an omniscient being and knows everything that will happen in the future regarding His own acts and that of finite, earthly creatures. The key word here is ‘omniscience’. God does not have any prior imperfections, thus an eternal, all-knowing entity having such an attribute as omniscience would not change His mind. However, although changing a mind would be rooted in ignorance for God, it could be beneficial and progressive for finite creatures, if virtuous and in line with God’s divine will. But aren’t there some passages in The Bible where it seems God’s omniscience is absent? That may be true but it’s due to the narrative biblical style of storytelling infused with metaphor and symbolism, not to mention the hermeneutical translations and interpretations of the original text. But that’s the topic of another epic essay, if not a series of academic books.

Trying to base moral precepts on the authority of God alone therefore deprives them of any independent status, and calling God good also becomes meaningless, since whatever God might be or command would necessarily be good—mere power worship, in other words. Many believers, therefore, have always realised, at least since Plato, that God actually condemns murder, stealing, lying, and adultery because they are wrong independently of His will . . .

This is bad theology. Murder, stealing, lying and adultery (which are moral abominations if God exists) are not necessarily wrong independent of God’s will. On Naturalism, the murderer or lying adulterer’s actions are amoral in a Godless universe, as death ends at the grave, thus there is no Ultimate justice in an afterlife. Such vile acts on theism, would, on Naturalism, be nothing more than the ‘behaviour’ of vessels of chemicals in motion on a speck of solar muck orbiting a giant ball of fire called the sun. As for making a choice: How can a psychopath’s actions be morally significant if he or she doesn’t have free will? Is a hungry lion morally responsible for killing and eating a zebra?

Despite the great variability of values across cultures it is therefore the essential features of human nature and the requirements of social life that are the basis of ethics. This is why we find that murder and robbery are condemned in societies all over the world which have never heard of the Ten Commandments, and why ‘thief’ and ‘liar’ are insults in any language.

Whether we’ve heard of God or not, He has woven the moral order (Logos) into the universe and has written it on our hearts and souls and subconsciously the minds of those who never heard of Him. Even atheistic moral Platonism, ie a realm of ideas existing objectively independent of this material world, seems a cop out. How can such things that are part of God and the nature of human persons, such as compassion, love, justice or any other abstract objects just exist independently? Also, where do the moral duties lie in Platonism? Nowhere, it seems, as such duties would be commands to do or not to do certain things, which only God can command. And even if objective moral values existed under Platonism, there would be no moral duties, as moral accountability would be non-existent.

In the conclusion of his book, Dr. Hallpike writes:

We are now in the position to take up the claim that one does not need God to be good, and the challenge of the atheist journalist Christopher Hitchens: ‘Name one moral action performed by a believer that could not have been done by a nonbeliever.’

Let me name two moral actions that could not be genuinely done by a non-believer:

1. Loving the Lord with all your heart, mind and soul. 2. Offering tithes with pure motive in the worship of the Body of Christ. I’m sure there are some more actions, but the above examples debunks Hitchens’ theologically challenged claims.

Dr. Hallpike continues in his book:

We can therefore agree with Hitchens that there is no reason to expect any special differences here between the conduct of believers and unbelievers, and the same would be true as well of many immoral actions that are also generally agreed to threaten the social order, such as theft, rape, and murder. To this extent it is clear that one does not need God to be good, and we also have to consider the influence of the traditional culture. So it is not particularly surprising that countries such as Scandinavia where religious believers are relatively few, but are still influenced by their Protestant cultural heritage, may nevertheless have low levels of crime.

Crime in Scandinavia, with Sweden being rape and domestic violence capital of the West, is actually quite high in many regions. And it’s not just because of the flood of immigration. Alcohol abuse and mental health issues are also hugely problematic. To say that there’s a spiritual crisis in Scandinavia would be an understatement. But back to the title of Dr. Hallpike’s book, Do We Need God to Be Good? Does Dr. Hallpike mean subjectively good or objectively good?; if the former, then we don’t need God, but the latter requires God. And here is why (see also my essay, Explaining Epiphenomenalism to a Dead Horse, October 2017 edition of NER):

The key word in the above syllogism is objective. By objective, such morals and duties would still exist in the world even if no one believed in them. Without God, human beings are not special. We are accidental creatures sharing the planet with millions of other species, all heading for individual and collective annihilation, any minute, any day, any time. There would be no afterlife. What we think are moral principles, are nothing more than convenient rules and regulations to keep us in line with the herd. Without God, we would be animal organisms on a par with rats, cockroaches, elephants and ants. But deep down we know, or intuitively know, this to be untrue, despite there being some evil people in the world.

But it’s not just the moral argument that I believe Dr. Hallpike is either confused or uninformed about. Regarding The Bible, he writes:

But these ‘Creationists’ don’t seem to have noticed that while the Book of Genesis does say that God created Adam and Eve, it also (1.6-10) requires us to believe that the earth is flat, surrounded by the waters below the solid sky, or firmament (the standard theory in the ancient world).

How does the above passage render the earth flat? Maybe I’m missing something here and am open to correction by way of comment. For The Bible, there was never a flat earth. Isaiah 40:22 mentions “circle of the earth,” and in Job 26:10, God inscribed a circle on the surface of the waters. And what supports the earth? According to The Bible, it’s not an infinite number of turtles all the way down, but space. God “hangs the earth on nothing” (Job 26:7).

Finally, regarding belief in the existence of God, the philosophical/theological issue of Truth and meaning should always trump the psychological condition of despair. Either God exists or He doesn’t, and any pretence that He exists due to the existential angst of the fear of existence is irrational and based on wishful thinking. However, despite my theological criticisms, I highly recommend this important book, as there are many valuable insights that Dr. Hallpike has highlighted, not forgetting to mention his clear, assessible prose. And although we may have some disagreements in the field of Darwinian evolution, he nonetheless exposes the folly of branches of atheism that simplify belief in God by crass caricature or unsophisticated rhetoric. Do We Need God to be Good would make a nice Christmas gift for an atheist friend or family member curious on such a monumental topic. It might even make them change their minds.

___________________
Kenneth Francis is a Contributing Editor at New English Review. For the past 20 years, he has worked as an editor in various publications, as well as a university lecturer in journalism. He also holds an MA in Theology and is the author of The Little Book of God, Mind, Cosmos and Truth (St Pauls Publishing).