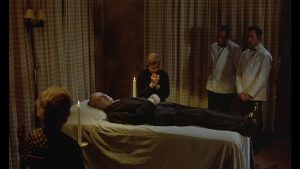 Lighting to die for: In the film The Discreet Charm of the Bourgeoise, the party hear wailing from an adjoining room in the restaurant and discover a vigil for the corpse of the manager, who died a few hours earlier.

All movies and works of art are open to Christian theological analysis but what I want to concentrate here is on the superb aesthetic and understated literary quality of such storylines in a remarkable French film from the Seventies. While film critics and moviegoers were recently remembering the 50th anniversary of The Godfather, the celebrations eclipsed another celluloid classic that was made around the same time in the spring of 1972: The Discreet Charm of the Bourgeoise, directed by ‘the godfather’ of surreal films, Spanish-born Luis Buñuel.

Where the movie The Godfather is reputed to be a fine metaphor (unwittingly?) of how the world pragmatically and amorally operates, Buñuel’s film reflects (again, unwittingly?) how the world is, when God is absent. (The Bible tells us how the world, overall, is, both spiritually and materialistically: ‘For we wrestle not against flesh and blood, but against principalities, against powers, against the rulers of the darkness of this world, against spiritual wickedness in high places.’ [Ephesians 6:12] I mention this verse by St Paul because Christianity is a theme that runs throughout most, if not all, of Buñuel’s films.)

Both movies won Oscars in 1973: Buñuel’s film chosen for Best Foreign Language Film, while The Godfather won in five other categories. But Buñuel’s film is not as popular as The Godfather, which is also a masterpiece. As for plot, …Discreet Charm… doesn’t have one, and the storyline is not just vague, but totally mystifying. If Samuel Beckett’s plays are in the genre of Theatre of the Absurd, then Buñuel’s surreal work is surely Cinema of the Absurd.

… Discreet Charm … was co-written by Jean-Claude Carrière and Buñuel. In an article in the UK’s Guardian in June 28, 2012, Peter Bradshaw sums up the movie quite well: “The action revolves around some half-a-dozen well-to-do metropolitan sophisticates who are forever attempting to meet up for dinner parties and elegant soirees only to find the event ruined by an absent host, or some mysterious misunderstanding, or bizarre turn of events, and then one will awake to find it all to be a dream, yet the distinction between dream and waking does not become any clearer.”

Bradshaw added that Buñuel was fascinated by the ritual of the dinner party, and, without a host, this social event resembles humanity frantically inventing intricate rules for itself in the absence of God. (Inventing ethical rules in the dark is impossible when light is required.)

However, regarding the film’s lighting: The cinematography, by Edmond Richard, is to die for. Richard went on to light two other Buñuel classics, The Phantom of Liberty (1974) and That Obscure Object of Desire (1977). But in … Discreet Charm …, the superb cinematography of spooky dream scenes would make any Hollywood horror movie look amateurish in comparison.

In fact, if I may sit in the proverbial psychiatrist’s couch for a moment: most of my own dreams look like they’ve been written and directed by Buñuel and lit by Edmond Richard. They’re not so much nightmares, but weird and uncanny moments with absurd scenarios void of resolution. As a Christian, this sometimes puzzles me.

But Buñuel was no Christian and was reputed to be an atheist, despite his best friend being a Catholic cleric. One wonders was he really a non-believer? According to the novelist/film critic Penelope Gilliatt, writing in The New Yorker (Dec 5, 1977), Buñuel said: “I’m not a Christian but I’m not an atheist either… I’m weary of hearing that accidental old aphorism of mine, ‘I’m not an atheist, thank God’. It’s outworn.”

And when Buñuel died from diabetes complications aged 83 in Mexico City in 1983, he spent his last week in hospital discussing theology with his long-time friend, Christian Brother Julián Pablo Fernández. Just before he died, he uttered his final words: “I’m dying.”

She adds: “The human drama is played out in terms of sin and redemption, evil and grace, love, and solidarity. Where does Buñuel, the fervent iconoclast, fit? What is the viewer to make of this will to destroy and liberate, at the heart of his work? How can the Christian believer engage in a dialogue with films that challenge his faith and posit the radical loneliness of man in an essentially evil world?”

According to Buñuel’s autobiography, My Last Sight (1982): He had a life-long rebellion against the 19th-century Spanish bourgeoisie, early religious faith, eroticism and a perfect conscience of death, and the lasting effect of his crisis of faith. This condition, I believe, leads to an absurdness of how one perceives reality, thus, Buñuel unwittingly used it in artistic form on the silver screen. This can also be seen in theatre.

The playwright Eugene Ionesco sums up the meaning of despair of the Theatre of the Absurd when he wrote that absurd is that which is devoid of purpose; “cut off from his religious, metaphysical, and transcendental roots, Man is lost; all his actions become senseless, absurd, useless.”

Just like the playwrights Ionesco and Beckett, I can’t get inside Buñuel’s mind or know his motives; I can only speculate on what I think is more probable than improbable. If he was rejecting Logos and embracing avant-garde in turning his back on classical conventions in Western cinema, then I believe he unwittingly gets caught in his own secular net. Why? Such a weird world proves that our existence points to the existence of God by showing us the absurdity of life on Naturalism without a Moral Creator. But that personal weird world of Buñuel’s films ended in the late-1970s, despite other surreal directors who continued to ape his legacy.

One wonders what Buñuel would make of the ‘charm’ of today’s bourgeoise, many of whom are reputed to be quite gross around dinner-table parties. The excellent writer/broadcaster, James Delingpole, who has fully embraced Christ, said he once went to a lunch hosted by a famous fashion designer.

He recalled halfway through the meal, to his disgust, people started passing around their iPhones “with dick [penis] pics on them.” It’s doubtful Buñuel would find this behaviour tasteful. As for Christ’s table fellowship: ‘And day by day, attending the temple together and breaking bread in their homes, they received their food with glad and generous hearts.’ (Acts 2:46)

During the release of his film Belle de Jour, in an interview in Venice 1967 with Christian Durieux, Buñuel said: “Any art which isn’t Christian, doesn’t move me.” He was referring to Christian art that comes from Greece, Rome, the Roman cathedral, the gothic cathedral, which “is felt with the heart. And the other art, which I call exotic, leaves me completely cold,” he said.

The ideology of … Discreet Charm … and other Buñuel films, if they are ideological, don’t have strong symbolic potency, but they do possess aesthetic power in their visuals, humour, satire, originality and wit. And he treats Catholic themes implicitly rather than explicitly.

His scandalous and subversive imagery and dialogue echo the cries of Nietzsche’s Madman, who arrives at the town’s square and cries: ‘What were we doing when we unchained this earth from its sun? Whither is it moving now? Whither are we moving? Away from all suns? Are we not plunging continually? Backward, sideward, forward, in all directions? Is there still any up or down? Are we not straying, as through an infinite nothing? God is dead. God remains dead. And we have killed him… How shall we comfort ourselves, the murderers of all murderers? What was holiest and mightiest of all that the world has yet owned has bled to death under our knives…’

Like the cutting-edge miserable worlds of Beckett and Ionesco’s dramas, a phantom God hovers around Buñuel’s meaninglessness scenarios, holding a mirror up so as the guests (and cinema audience) can see their soulless lives. A world where the hypocrisy, entitlement, complacency, snobbishness, apathy and amorality of the bourgeoise are laid bare. And let’s not forget that although Buñuel’s world view leaned toward the left, such ideology was a lot different in the past. Any flying of a Rainbow flag, had they existed back then, would be quickly burned, not to mention the imprisonment of those with Woke viewpoints.

According to philosopher-historian Paul Gottfried, an occasional visitor to this parish (NER): “It would be impossible to imagine any shared moral ground between these people and what today presents itself as the left. Without being overly polemical, it would seem the old Communist left has about as much as common with today’s left as the American conservative movement of the 1960s does with its present, would-be incarnation. Like times, movements change—sometimes in ways that render them unrecognizable to past members.” (Chronicles magazine, April 19, 2022)

In conclusion: Buñuel’s world view, his climb to fame to the top of the surreal hill he died on, reminds me of a quote by Robert Jastrow from his book, God and the Astronomers. It’s as if the great director lived by his faith in the power of so-called ‘reason’, but the story ends like a bad dream. He has scaled the mountains of ignorance, he is about to conquer the highest peak; as he pulls himself over the final rock, and draws back the cine-theatre curtains, “he is greeted by a band of theologians who have been sitting there for centuries.” Is it any wonder that he spent his final moments talking about theology?

PrevA Nighthawk Flies into the Sunset
What Would Walt Think?Next