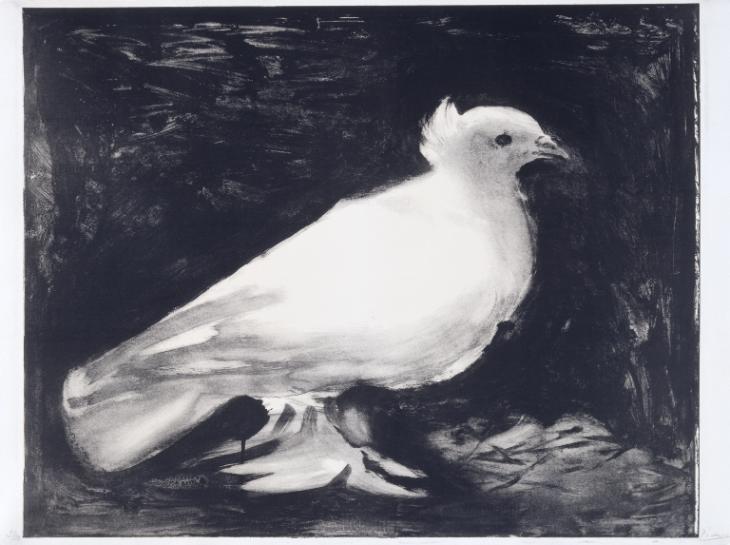 Two generations of Christian Arab Israeli patriots from Nazareth have demonstrated that by their insistence and patience, they must be judged on the content of their character and not by the ethnicity, confessional identity or, as in the case of Martin Luther King, the color of their skin. The older generation is represented by 55-year-old Bishara Shlayan, the founder of a new political party that initially appealed to the desire of many in the Christian Arab community to participate as fully equal citizens of the State of Israel, bearing all the obligations of Jewish citizens rather than following the other Arab parties that continually claim special exemptions, dispensations and privileges. This has been the state of affairs whereby the Muslim Arab political leadership has long regarded the Christian community as subservient and over which they had the power to ostracize and blackmail, threatening “dire consequences,” and intimidation.

The new party has undergone several name changes that reflect its ideological evolution but what is important is the character of its leadership. Bishara Shlayan has held a unique post for a member of the Arab community that once was considered off limits to any Arab applicant—captain of an Israeli commercial vessel in the “Zim” National Maritime line. The party was formed in 2013 and initially called Ihud Bnei haBrit (United Allies), playing on the dual meaning of the Hebrew word “Brit”, (Covenant in English), whereby the New Testament is referred to in Hebrew as HaBrit Hehadaha.

The party has undergone several name changes and in 2019 took the designation as HaTnuah HaNotzrit HaLiberalit (The Liberal Christian Party) and expanded its efforts to enlist Muslims and Jews as well. It promulgates as its fundamental starting point the principle of equal citizenship, i.e. equal rights and obligations for all citizens. Before the establishment of a political party, Bishara had energetically campaigned to increased recruitment of young Christian men into the armed forces by establishing the The Israel Christian Recruitment Forum.

Read more in New English Review:
• A Partisan Pentagon
• Hypocrites and Heroes
• Now is Not the Time

Just as the father had to insist on serving his county in what was considered a post reserved only for Jews, Bishara’s son, demanded from the authorities to be allowed to serve in the Navy, a service branch considered a particularly sensitive security one and the preserve of Jews only. Almost all Arabs who had done military service in the armed forces were previously limited to special infantry units known as the Sword Battalion, consisting entirely of Druze, Circassian (Turkic, Muslim non-Arabs), or Bedouin trackers (New English Review July, 2015, The IDF Sword Batallion).

The Shlayan family had to face strong opposition from the traditional Christian Arab leadership policy of acquiescence in the face of radical Muslim opposition to Israel on every front, resisting all attempts at coalition governments with the Zionist parties. Muslim pressure on the Christian community in Israel was a fact of life due to the Christian numerical weakness (a 10% minority of Israel’s total Arab population (about 165,000 Christians among around 1.7 million Arabs in Israel’s total population of just over 8 million).

It mattered little to most Israeli Muslim Arab politicians who claim to follow Islam today that throughout the first 50 years of Israel’s existence they embraced the Communist Party which was able to receive the plurality of the Arab vote simply because of its close association with Moscow. The Israeli Communist Party line appealed to the Arab vote by strongly supported Nasser’s secular Arab nationalism, and won elections at the local municipal level. It provided numerous benefits to ambitious young Israeli Arabs in areas of welfare, education abroad (in the USSR and Bulgaria), social welfare and politics. This was later replaced by aligning with radical Islam when the USSR collapsed.

Bishara’s party’s platform demands full integration of Arab Christians (and eventually all Arabs) into Israeli society, a two-state solution with Israel retaining the greater part of the region west of the Jordan River. Until such time as Israel finds a reliable partner and agreement by mutual consent among the Palestinians “resistance groups”, Shlayan believes there is no alternative but maximum security precautions and maintenance of the current Israeli control of all areas retained by Israel after the 1967 war.

Shlayan and other members of the Melkite and Greek Orthodox communities are resentful at the Muslim domination of what, until 1967, was the predominantly Christian presence in Nazareth that has been usurped and is symbolized by an accelerating Christian exodus from Nazareth to Jerusalem, Haifa, and Shfar’am. Many prominent Christian sites connected to the New Testament lives of Mary and Joseph disappeared following the 1967 war as Muslims continued to displace Christians and replaced by emblematic Koranic injunctions proclaiming that “There is no God but Allah and Mohammed is his prophet.”

In 1862, the population of Nazareth was only 3,120 with Christians forming a substantial majority of almost 80%. The population grew to 5,660 in 1867 and Christians constituted roughly two-thirds and Muslims one-third of the inhabitants. From a ratio of two to one in favor of Christians in 1948, the ratio has now flipped in favor of Muslims by the same proportion. Government acquiescence of Muslim plans for a large mosque in the city triggered protests from Christian leaders and in 2002, causing reversal of the decision and halted construction of the mosque.

The new political party has attracted a few secular Jewish supporters who see it as a true “Liberal” party in the Western tradition of non-denominational politics. In two elections, the party’s campaign work has been subjected to intimidation, vandalism, and destruction of polling places and party literature committed by Muslim “activists” in the pay of the much larger all-Arab political parties.

Pro-Israel pronouncements have only increased accusations by many Muslims that Bishara, like Greek Orthodox priest father, Gabriel Naddaf, a judge in Israel’s religious court system and a spokesman for the Greek Orthodox Patriarchate of Jerusalem are paid agents of the government. Naddaf is a joint founder of the Forum for recruiting Christians in the Israel Defense Forces. Both men have been threatened, and on occasion required police protection. In 2016, Naddaf was selected to light a torch at the Israel Independence Day ceremony on Mount Herzl much to the chagrin and discomfort of his church superiors.

Father Naddaf and Captain Shlayan are two contrasting figures in appearance, speaking skills, personality and their public persona. Naddaf is a highly polished intellectual and brilliant speaker of a polished literary Hebrew while the seaman is a jovial, hefty, charismatic extrovert who exudes a rough and tumble confidence, never speaks from notes, uses an everyday vernacular Hebrew peppered with appeals to his audience that they listen “heart to heart” and eye to eye” with him.

In spite of the relative success in encouraging an increase in the number of Christian Arab volunteers to serve in the IDF, the new party has had very little success at the polls, garnishing no more than a scant few hundred votes in each two of the last elections. It is no secret that the hierarchy of the two most “established” churches among the Arab Christian community (Melkite and Greek Orthodox) have traditionally followed a policy of appeasement in their relations with the Muslim authorities and are embarrassed by the new party and its leader s well as by Father Naddaf and have not looked favorably on any division among the “Palestinian Christians” under their supervision and tutelage

The same situation prevailed throughout the period of the British Mandate in periods of relative calm when minority elements among both Christians and Muslims aided the Zionist project in a surreptitious way (see New English Review, Arab Support for Zionism, 1917-1948). They were always mindful of the potential for retribution against them for any deviation from the extreme “all or nothing” policy of the Arab leadership in its policy towards the country’s Jewish population.

Read more in New English Review:
• Portsmouth in England
• Generations X, Y, & Z and the Future of Democracy
• The Catalonian Case: A Challenge for Spanish Democracy

Whether the new party can grow and overcome the long history of sectarian divisions and appeal to a moderation of extremism among the Arab political parties remains to be seen. What it has demonstrated is that there is now a known address for Israeli Arabs to find a way to reach out to the Jewish majority for a redress of grievances. The other Arab parties joined together in the last election to form a common list to increase their strength and even expressed a readiness to enter into a coalition government with Zionist parties. This is seen by some as throwing a bone to moderates who may be attracted to the new party. The other tactic made very apparent by the violence, threats and intimidation used in the last two elections to prevent the new party from getting itself established is to remind the Christians that they are playing with fire. 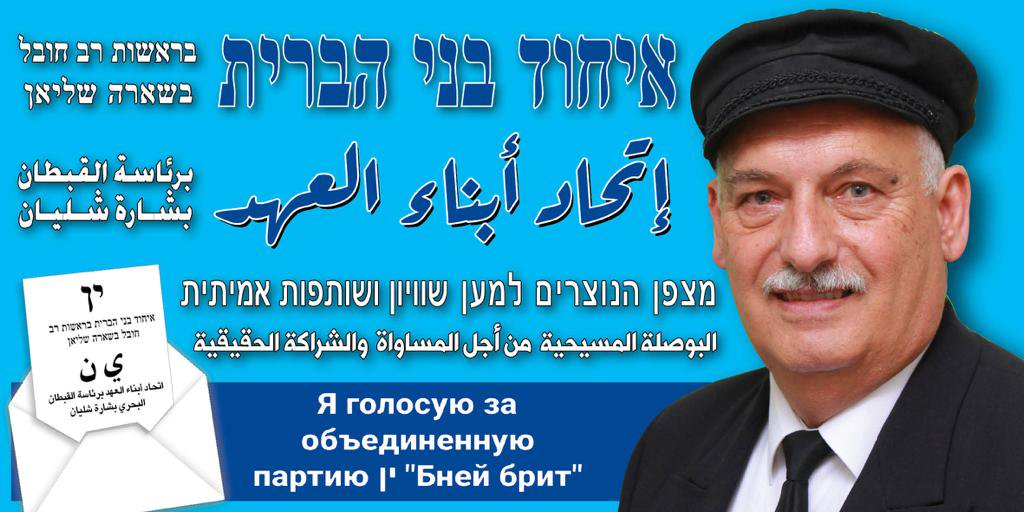 Election poster of the new party with texts in Arabic, Hebrew, and Russian stressing its new non-denominational, non-ethnic nature.

PrevGenerations X, Y, and Z and the Future of Democracy
Two SonnetsNext