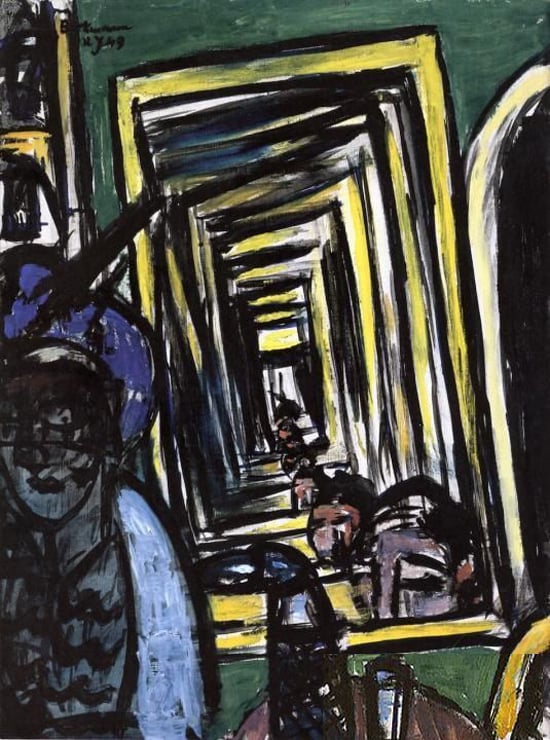 Paul Sennett hated New Year’s Eve more than he hated New Year’s Day. He began thinking about New Year’s right after Thanksgiving. Sennett decided to go into the antique store again and see if the mirror he kept considering was still there. Maybe it would be on sale today–Black Friday.

The door activated a barely audible tinkle from an overhead cluster of small bronze bells alerting the proprietor of the Antiques and Antiquities Emporium. It had a single door and a small windowed front but the inside appeared as a crowded floor the size of a 6-car garage. The place smelled of ginger and lemon-tinged spice.

“Yes, Mr. Synopios, do you still have the mirror?” Sennett scanned the clutter of disorganized framed art and dust-free furniture.

“Of course…” Synopios tented his fingers. “…and today it’s on sale.”

Synopios uncovered the full length square mirror set on polished mahogany legs each of which looked like lion’s paws clutching shiny gold-plated balls. The mahogany frame to the mirror was edged in a Grecian-Line with a fine gold wire outlining the up-and-down squares of the Greek pattern. “Before I tell you today’s price let me remind you the Grecian-Line relief is outlined by an original gold wire. The dating goes back to the time of Doric Greek Architecture and many centuries BC.”

Sennett looked at the front of the mirror and then swiveled its full length around a central pivot to check its other side. “I really didn’t think the Greeks had the technology to make a double-sided mirror. And the silvering hasn’t aged at all. It’s in perfect reflecting condition.”

“Yes, indeed Mr. Sennett, this mirror is very special. The price today is only $2,000. It goes back to its original price tomorrow.”

“Certainly, Mr. Sennett, I knew you wanted it and that you were the right person for it.”

“Right person for it? What do you mean?”

“This item has withstood the test of the ages because of it being passed from one meticulous owner to another. There are certain conditions for its sale,” Synopios smiled.

“I knew there had to be a catch to such a price reduction.”

“You are indeed a true cynic Mr. Sennett, but that is precisely the kind of person
the mirror needs.” Synopios swung the mirror back to its original position. “The condition of sale is that I personally crate, transport, and re-assemble the mirror at its destination. And…” Synopios put his hand on Sennett’s broad shoulder. “…it must be delivered on New Year’s Eve. It has to be set up precisely at midnight–the exact transition into the New Year.”

“I never heard of such a condition of sale.”

Synopios’s smile faded. “Let me add that not only will the original cost return tomorrow but it will also go to another buyer.”

And now it was New Year’s Eve with three hours to go before the year 2021 arrived. Sennett had accepted the terms without further discussion. He actually relished the delivery of the mirror on New Year’s Eve. He spoke aloud looking out his posh 5th story 70th street New York City apartment window. “It will add significance to an otherwise meaningless human invention of a holiday.”

The building’s front door buzzer broke his train of thought. The doorman announced his visitors were coming with a large-crated piece of furniture.

Three burly men, directed by Mr. Synopios, brought the disassembled mirror and its base into the apartment. “Good evening Mr. Sennett, I will not wish you Happy New Year since you do not acknowledge such calendar events as being celebratory.” The day-laborers began uncrating it and subsequently left with the packing materials. Synopios and Sennett were alone.

“Will you need my help in putting the mirror together?” Sennett looked at the components and sensed Synopios wanted him to participate.

“Yes, it’s important that you do.” Synopios withdrew three wooden tools from his coat and then hung the coat up in the entry closet.

“Mr. Sennett, may I ask you again why you dislike, or rather do not acknowledge, New Year’s Eve or Day as a National Holiday of observance?”

“What’s the sense of it? Each year is worse than the next. It’s just hypocritical to celebrate it. When this country is not at war there are terrorists poised to destroy people, places and things, which are symbolic of our reason to exist. And today we are both at war and wary of terrorist action at any moment.”

“Do you have any more specific reference to your stance on this attitude, may I ask?” Synopios handed Sennett a wooden screw driver. The handle and the screwdriver tip were both made of some hard wood–not metal. Synopios used a wooden pliers and leather topped hammer.

Sennett replied, “The United States is at war in Iraq and Afghanistan. ISIS is beheading innocent journalists and killing non-Muslim civilians for being just that–non-Muslims. The Taliban in Pakistan murdered over 140 children. Computer hackers threaten death and destruction as in 9/11 just for showing a movie parodying North Korea’s President. And most ludicrous of all, our outgoing President refuses to acknowledge he has lost the election.” Sennett paused. “I will not belabor the COVID-19 pandemic. Do you want me to go on?”

“I would like to be in this country at a time when everyone talked of peace and practiced peace–a time when even the President outwardly proclaimed we would not be involved in other countries’ violent way of living. I would like this country steeped in an aura of peace maintenance.” Sennett stepped back from the assembled mirror. He looked for Mr. Synopios to reply, but couldn’t find him. It was now 15-minutes to midnight and 2021 would soon be here.

“I am here Mr. Sennett, and I know I can grant your wish.” Synopios’s voice sounded like he was right next to him.

“Here, turn around. Face the mirror.”

Paul Sennett felt his pulse pound and race. “In the mirror? How? What’s going on?”

“If you step into the mirror Mr. Sennett, your wish to be in the peaceful conditions you desire will happen.”

“What? Who and what are you Mr. Synopios?”

“My name is D. Synopios–Diogenes of Synope. I have been relegated to seek out true cynics such as myself. Long ago I gave up seeking an honest man. My banishment from society is to roam the earth with this mirror and to find people like you, Mr. Paul Sennett. Come, step into the mirror. The time in America you seek is here. Come, the clock is striking midnight. This will only work at a precise time alignment.”

Sennett’s fear changed to excitement. His prayers had been answered. He extended his hand to touch the hand Diogenes offered and entered the mirror as the clock struck twelve.

As 2021 arrived there was a change on a small storefront amidst a throng of New Year’s Eve revelers. A sign that once read Antiques and Antiquities Emporium faded to non-existence. The store window became devoid of framed art and ancient relics.

Paul Sennett stood beside Diogenes. He stared open-mouthed at vehicles he had only seen in old photographs. Winter clad groups were shouting “Happy New Year.”

“Where are we Mr. Synopios?”

“What!? I wanted to be in a peaceable time in America.”

“But the US will be attacked by Japan in December. There will be war.”

Diogenes put his hand on Sennett’s shoulder. “Yes, indeed, and you, Mr. Paul Sennett, have eleven months to stimulate your country to prepare for the inevitable. You might be able to save lives at Pearl Harbor. You could help shorten the length of the war by having your country start now by enhancing America’s land, air, and sea military to accomplish this.”

Sennett looked at the dated cars moving by and honking their horns welcoming the 1941 New Year.

“How can I, one person, bring about such actions?”

“The power of this mirror will help, once you develop sincere motivation to do so, Mr. Sennett. I must leave you now.”

Sennett looked at the people blowing horns, wearing party adornments, and happy for starting another year of living in the US. A gaze into the mirror and back at the crowds gave him a sudden inner feeling of resolve. He spoke to the loud and unhearing mass of humanity, “I do think you and my country are worth saving.”