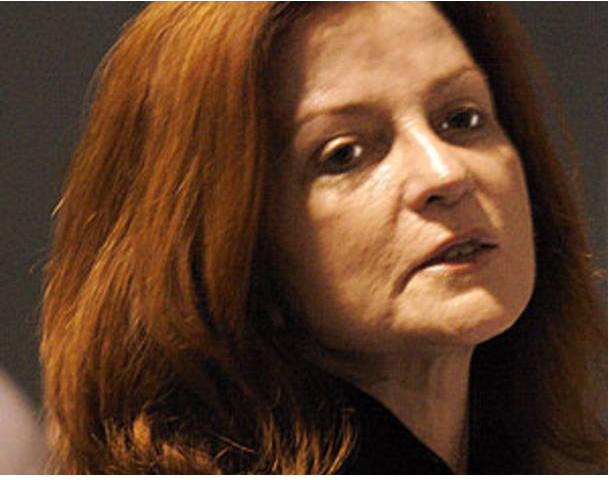 “Women are affected by the lunar tides once a month; men have raging hormones every day.”
– Maureen Brigid Dowd

Maureen Dowd will be eligible for social security next year. The indelible red head, at 65, might be a tad ripe, but she still dishes vintage New York snark. Like Rosie O’Donnell and Joan Rivers, Miss Dowd is notable for that one big apple “value” which she wields like a shillelagh. With Rivers it was loud invective and a ready middle finger. With O’Donnell, its nails-on-a-blackboard vulgarity and a vocabulary that embraces epithets like “dyke.”

With Dowd, Georgetown’s most visible spinster; the cudgel of choice is snark.

Maureen’s more caustic outings often read like menopause rap, the difference being that Dowd can actually spell most of the one-syllable words she uses. Hat tip to NWA, Niggaz Wit Attitudes.

Miss Dowd is the distaff token that allows the “grey lady” of Manhattan to be a bitch at least once a week. In print, Maureen Brigid often makes the mean girls look like couch kittens.

Yes, Dowd actually resides in Washington, DC, yet writes for the uber-liberal New York Times. Maureen is a graduate of Catholic University too, a school house which may explain her career path as a PCN, plain clothes nun. The polite word for Maureen’s petulant professional niche in journalism might be “scold.”

Indeed, among contemporary pundits, Miss Dowd is like the dean of discipline at those Catholic schools of yore. Every Catholic grade or high school used to have at least one starched wimple who was expert on the hazards of boys, necking, slow dancing, short skirts, and patent leather shoes.

Maureen provides her services to the New York Times, not so much as a critic of political plans, policies, and programs as she is a critic of the hazards of men in general, political men in particular. She is literally the ad hominin attack broad of 8th Avenue.

Miz Dowd is armed with poetic license and a writ of gender immunity. The two, in tandem, make for an open season on men.

Thus previous book titles include Are Men Necessary and Are Men Obsolete. Dowd may not be H.L. Mencken, but she does have a flair for conflating rhetorical and redundant.

Her best shots are reserved for special men: “Al Gore is so feminized and diversified and ecologically correct that he is practically lactating,” says Maureen. Snap! Miss Dowd is something of a hands-on expert on celebrity sissies. Hollywood types feature prominently on her bachelorette dance card.

In Washington, she is fond of referring to George W. Bush junior as “Mini-Me” or “shrub.”

Fraternizing with Dowd is like being kissed by an ashtray. Appearing in one of her columns is like getting slapped silly with a bar rag in Martin’s Tavern at happy hour.

Periodically, Maureen Dowd cobbles a timely book together, usually a collection of her previously published essays. The practice is epidemic inside the Beltway where double dipping is de rigeuer. Getting paid twice or thrice for the same job is a Washington  D.C. tradition. Hat tip to Huma Abedin, triple dipper extraordinaire.

Dowd’s latest compilation milks the impending presidential election like a floor length udder, a compendium of columns on Donald Trump and Hillary Clinton. 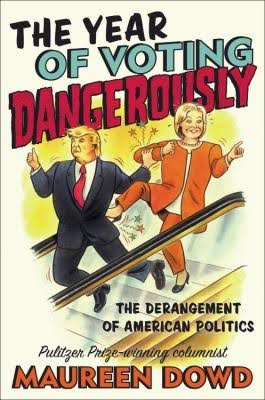 Girls like Dowd and BFF Kathleen Parker, Washington Post, wear their Pulitzer prizes like titty tats. Alas, the question about Pulitzers is the same as it is for day-time Emmys. Who doesn’t have one yet?

Dowd’s treatment of Trump in The Year of Voting Dangerously is what you might expect. Her treatment of Hillary is not much better. If you had to review Maureen’s latest book, you could do it in a few words: “A plague on both their houses.”

Nonetheless, you cannot read Dowd on Trump without noting their affinities: age, rhetorical incontinence, disposition, Celtic heritage, Catholic schools, and even hair. To be fair, the Trump coif has an edge, if authentic color matters. Still, by disposition, the two have much in common. Trump breathes fire. Dowd dips her quill in Drano.

However, Dowd has been raging against the boys club much longer than Trump. Still, many of the same folks who don’t like Donald do not fancy Maureen either.

Indeed, the Gestapo element at Media Matters commissioned an audit of Dowd columns as a test of party orthodoxy, political correctness if you will. Mo apparently flunked the vagina solidarity test with flying colors. It seems that 72% of Dowd’s essays about Mrs. Clinton are “negative.”

To be fair, if we must, Maureen Brigid Dowd is a good read, often hilarious. She is mistress of her craft, more than you can say about most of the girly men and azimuth kissers at the Times. Dowd does not have Camille Paglia’s courage or insight, but she does have wit and that says a lot for the oft humorless left and liberal matrons everywhere.

When Dowd was hired by the NY Times, Chris Hitchens did a piece for Vanity Fair where he speculated that Dowd might bring some ground truth to the coverage of the Clinton and Bush regimes. The Hitch speculation turned out to be prophetic.

Dowd approaches journalism as Trump approaches politics, neither cares much about your sensitivities. If either pisses you off, it’s all in a good day’s work.

Indeed, Maureen may wear the fembot facade until November, but behind the curtain, like many other women, she may push the button for change. Most folks vote for self-interest, not ideology. Trump in the Oval Office provides at least a decade of good material for scribblers like Dowd. Bitchy snark pays well too.

G. Murphy Donovan, a veteran of Catholic schools in the Bronx, writes about the politics of national security.