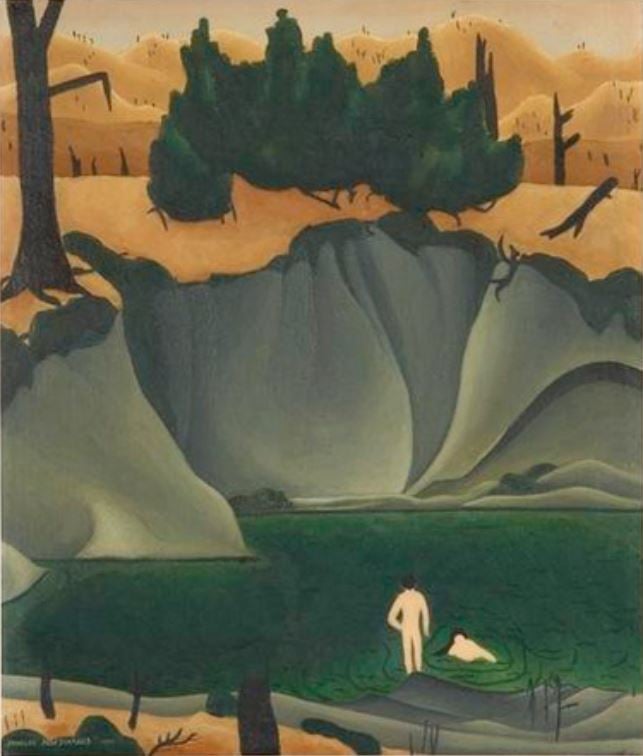 In Memorian A M L

where your calcined remnants lie,

in this bleak graveyard

high above the town.

gives little shelter to the gnarled,

to life near by, and, jagged,

Gorse and heather climb the hill,

and bitterly reproach the silent land

that barely gives them living.

It is forlorn, this empty place

You chose to have your relics laid,

but better far than Finchley,

where the flames consumed you.

It is well that this dissenting, barren ground

should hold you now: you will not break out

and blow about the grey-green nettles

or the whins, nor enchant the hours with wit

nor hurt with bitchiness:

your wicked mirth is stilled.

I cannot stay to mourn you

in this fading light: December is so cruel here,

already freezing on your recent grave;

but April will fire the slopes

with flickering flecks of yellow,

creeping up to where you are, and yet are not.

So much of you is held in memory of laughing days

Too fragile to be written down and bandied on a page.

James Stevens Curl is a leading architectural historian, and read for his Doctorate at University College London. He was twice Visiting Fellow at Peterhouse, University of Cambridge, and is a Member of the Royal Irish Academy, a Fellow of the Societies of Antiquaries of London and of Scotland, and a Fellow of the Royal Incorporation of Architects in Scotland. His most recent books are Oxford Dictionary of Architecture (with contributions on landscape from Susan Wilson), 2015, and Making Dystopia, 2018, both published by Oxford University Press.

PrevJames Stevens Curl
Book review: Give Us Back the Bad RoadsNext