Exodus and the Boston Cathedral 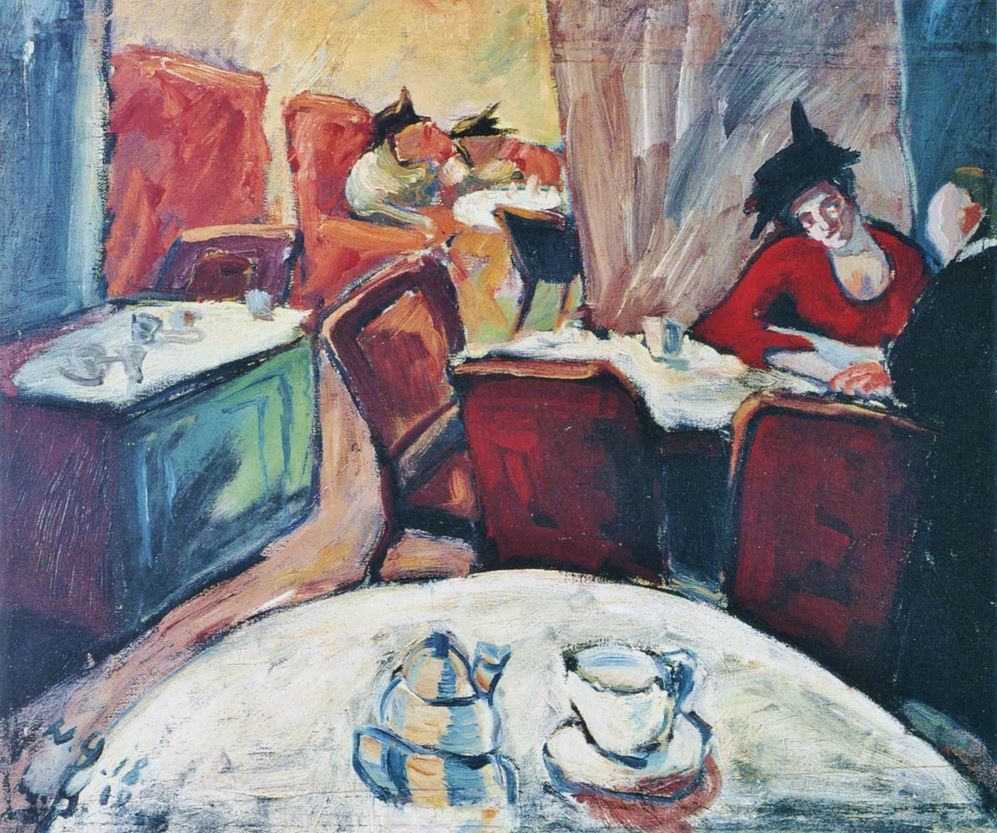 Dr. Michael Waxman faced his thirteen-year-old daughter in his study. “Well, Tracy, what is it you wanted to ask me in private?”

Tracy tossed her ponytail and smiled, “Daddy, did you ever have a serious girlfriend before you met mom?”

“Well, when I was your age in school and later in college, I dated other girls.” Waxman sat back. “Your mom, though, was special, I knew she was the one to marry.”

“But daddy, how did you know?” She moved closer to his lap. “Didn’t you think any of the others were special like that?”

Waxman put on a serious, sage-like face, “I always asked myself if this is the woman I want to spend the rest of my life with.” He paused and threw up his hands.

“Your mother was the only one.”

“Do you think I should do that too?”

“You’re much too young to be in that position, however, my advice and answer is a definite yes. Just look at us and ask, ‘will I be happy like mom and dad with this person’.”

“Okay, Dad, you’re right. I’m not ready yet. The boys I meet are dorks.” She kissed him on the cheek and left.

Waxman closed his eyes and reflected. He did remember one girl in college whenever two old movies on TV triggered his memory. The first is the former Academy Award movie by author Leon Uris called Exodus. Academy award month had just finished and Exodus was featured on television. Another was a church-themed movie titled The Bells of St. Mary’s also aired on TV. He wasn’t going to watch them, but the TV previews recalled his time with Judith. Waxman’s thoughts went back to his second year at college—in 1960.

He sat back in his desk chair and spoke in a low voice, “I remember it all…in every detail.”

At Boston University, certain courses were mandatory, including physical education and Fine Arts. My first phys-ed course was merengue ballroom dancing. I also enrolled in a Fine Arts course–Church Architecture. The first day of the first semester, I had to run from the phys-ed building to the liberal arts building for my back-to-back dancing and architecture classes. When I arrived, all but one student had filed into the classroom. That was how I met Judith Novaks.

She was my height and had the softest-looking shoulder length, light brown hair. She held the door open with one hand, and clutched the Church Architecture textbook to her beige sweater. She looked like the movie star Ingrid Bergman.

“Come, the Professor, he is going to start.” She blinked her light blue eyes twice.

Ingrid Bergman never spoke with a European accent. We sat next to each other as Professor LeDeux gave an overview of the course. After class, I walked Judith to the elevator and introduced myself. A smile appeared on her face revealing a dimple on each cheek.

She laughed, “I am Jewish also. I am from Israel but now American citizen. My father teaches law at Brandeis University.”

I explained why I was almost late for class and probably would be, for the rest of the semester.

“We can go last…into the classroom…together.” She giggled. “You must tell me what is meringue…sometime?”

I was ecstatic. This beautiful creature seemed attracted to me. Meeting Judith would carry me through my parents’ criticism of my course selections, which I vividly remembered.

“Dancing? You’re pre-med? What is this dancing crap?” Dad looked at my mother for back up. “And church architecture . . . you’re Jewish for God’s sake.”

I called Judith almost nightly. We always began talking about the course, and ended with projections of our future: me for medical school, and she for being an interpreter at the United Nations. Judith was a language major.

I was dying to make a date with her. It was difficult because of clashes in our academic and commuting schedules. One Friday, Professor LeDeux announced that we all had to attend, and critique, a local church’s classical period architecture. Judith selected the Boston Holy Cross Cathedral and I immediately chose the same.

“We could go together, yes?” She touched my hand, and I melted.

I agreed immediately, “I’ll pick you up at ten o’clock Sunday morning ahead of  the noon service, and we can eat someplace later.”

“Yes, it will be wonderful.”

I was smitten. I asked dad for his car for the field trip. My old Chevy clunker wasn’t that reliable.

“Church? You want my new Oldsmobile to go to a Boston Catholic church.” My dad’s face turned red. It got worse. My father lost it. He looked at my mother and back to me. “What? You’re going to a church, with a Jewish girl from Israel, whose father is a Law Professor at Brandeis.” He looked at my mother’s question-mark face. “Do you believe this story? Your son thinks we’re idiots buying this bullcrap.”

They both relented after I got Judith on the phone to verify I was not a purveyor of bovine feces.

Judith lived in Waltham not too far from the beautiful Brandeis University campus. I met her family. Judith whispered, “My father, he would like to talk to you in private.”

I began to sweat. He looked like an academic scholar with a football player build. He shook my hand again and grinned as he wiped my sweat from his hand on his pant leg. It didn’t sweat when Judith first introduced me to her parents.

“Judith is a cautious girl. She has talked to us about you, Michael.” He paused to light his pipe. “I will tell you about us and Judith. We used to live in Hungary. In 1956, the communists isolated all academics, especially those who specialized in law. Some were imprisoned and some were killed. We were marked for death and fled to Israel. Those were life-threatening times and our children still sometimes get nightmares. Any flashback to those days produces a reaction of distrust and isolation—for Judith sometimes fear.”

I promised to be careful and protective with Judith, and off we went to the Boston Holy Cross Cathedral.

“Are you scared, Michael? I am nervous. We are both Jewish. What if they find out?”

“Don’t worry. I’ve done this before. My high school Jewish fraternity made us visit St. Clements on Christmas Day, and nothing happened. I’m sure others have come here to do what we’re doing. Maybe some are just tourists.” I pointed to a hippie couple with a camera.

We took Polaroid pictures of the important outside and inside architectural accents, and compiled our critiques. We left before the Mass to get lunch. I took her to the only kosher deli I knew in the area–Jack & Marion’s. It was number one on the coed eating place list in Boston. She loved it and gave a glowing report to her family. Her father patted me on the shoulder after shaking my now dry hand.

I was infatuated with Judith. We often had lunch together at BU’s kosher Hillel House and became good friends with the Rabbi. My father would never believe this, so I never told him. A new movie premiered in Boston, which Judith was dying to see. It would be our second date. Judith’s mother spoke to me this time.

“Michael, this movie–Exodus–is about the founding of Israel. I know it is her choice, but Judith may get emotional.”

The theater showing Exodus was packed. Judith was excited. “Michael, I know these places on the screen. This movie was really filmed in parts of Israel.”

She seemed happy until the scene of the ship “Exodus”, carrying displaced European Jews, docked in Palestine. The film’s orchestra played the Israeli anthem. Judith touched my shoulder.

“I must stand up. Please stand up with me, Michael.” She stood up holding my hand and pulled on my arm. “Please, we must stand up.” The screen focused on Israel’s flapping flag with its blue Star of David against the white background. I stood up.

The most amazing thing happened next. Instead of the movie patrons complaining of us obstructing their view, the people beside and behind us began standing up. In less than a minute, like a wave radiating out from a stone dropped in a pond, the entire attendance in the theatre stood up.

I swallowed hard and told her father what had happened, “Professor Novaks, I hope Judith doesn’t have some adverse reminiscence later.”

“It was a positive thing she did…and that you did, Michael. It’s encouraging that the rest of the theatre followed your example.”

I didn’t tell him that our hand-holding was an ice breaker with us. She kissed me in the car before I walked her to the house.

We had several dates well into the second semester. My parents wanted to meet her. I had explained to mom and dad about her oppressed childhood in Hungary, and difficult teen years in Israel.

My dad didn’t say much other than, “Do I have to wear something over my under shirt?”

My mom asked, “Have you told her that you’re Italian and Jewish?”

“Yes, she considers it just two ethnic cultures blending together. Her mother was French Catholic, and her father Hungarian Jewish.”

I could never have predicted the outcome of the proposed meeting. We were almost at my house when Judith became agitated.

“Wait…Michael…stop…stop the car! We must not go any further.” Judith seemed terrified.

I pulled off the road. “What? What’s the matter?”

She pointed with a shaky hand and finger. “That sign, we cannot go there.”

I looked at the sign. “It’s just the name of the town we have to go through to get to my home.”

“No, I remember in Hungary. They inspect books, and if they find certain books you go to prison. No, we must go back.” She was shaking.

“They had such signs in Hungary. This is very bad. Please take me home. It tells reading is not permitted.”

The more I tried to reason with her, the more hysterical she became. Her father calmed her down a little by showing her the names of other townships like No. Weymouth and No.Gloucester. However, Judith was obviously pathologically distressed. The memory of her fearful times in Hungary had surfaced. She became withdrawn and suspicious.

Thereafter, Judith could not maintain her former pleasant college student demeanor, even with psychiatric help. We were still friends, but she rarely smiled or laughed and seemed distant. She kept to herself. There was no more dating and her only words to me when we would see each other in class was “hello” and “goodbye”. The next year she transferred to Yeshiva University in New York. She never answered my phone calls or letters. We would never meet again.