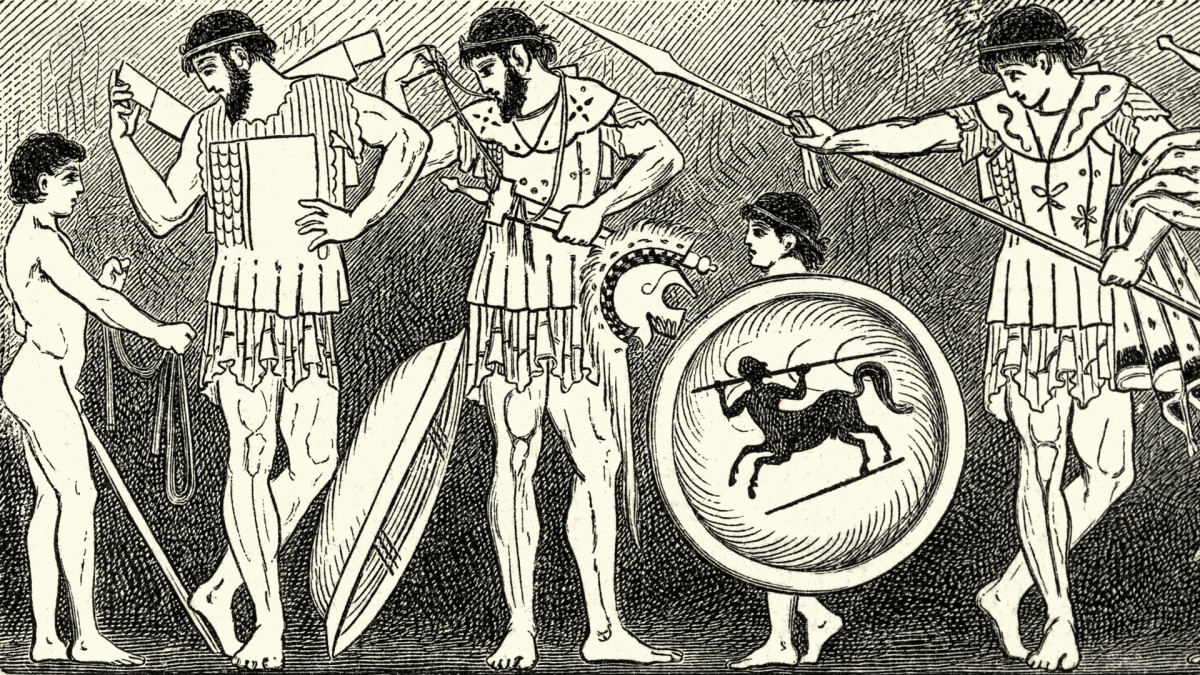 The following brief tale from Plutarch may be apocryphal:

Once upon a time a young Spartan boy in military training trapped a ferret.  He was about to kill and eat it when his phalanx was called to fall in.  To have disobeyed this command, or to have arrived on parade belatedly would have been grounds for punishment.  So the boy, being very hungry, chose to conceal the ferret by his side and under his cloak.  In that way he could butcher the thing later in the day, and he would not lose a tasty meal of ferret. (I need hardly add that tastes have differed over time and place; non-Spartan Greeks, for example, were nauseated by the black soup usually served at communal Spartan messes.)  Furthermore, the squad commander would not punish him for this flagrant disregard for Spartan convention.

But the ferret, itself hungry, feasted on the boys flesh, eventually eating all the way through to some vital organs.  The boy did not utter a sound since that would have been considered shameful.  Eventually, he just fell over, stone dead.

What virtues did the young Spartan possess? Certainly, in addition to a superhuman ability to withstand pain, he had courage and honor, and a commensurate fear of any ensuing dishonor.  But, from our contemporary point of view, was it not foolhardy to allow the ferret to eat his flesh and insides (leaving aside our surprise at the boy’s culinary preferences)?

Plutarch’s vivid tale seems to teach us something about the courage needed to step out of our own formations. We are daily bludgeoned by preposterous and malign wokists, their cheerleaders in the media, corporate and academic institutions, and other branches of the de facto Politburo.  Those who have been ideologically ‘pravdad’ and ‘grievanced’ from near infancy, readily ‘fall in.’  If they do object to such coercion, the wokists will smell blood, and chastisement, cancellation and other forms of persecution will follow.

Many of the college-bred pamperati cannot escape the burden of hate infusion, any more than a brave young Spartan warrior in training could fail to obey the pressures and expectations of his time and place.  For the boy, the necessary courage to break with tradition and the demands of his militaristic upbringing would have been greater than that required to prevent a wild animal from devouring his insides. Well, each to his own, as they say. The boy was indeed courageous, and for him it would have taken an even greater degree of courage to have disobeyed the ruling conventions of the Lacedaemonians: to point out that there exist other ways of thinking and acting.  We must imagine that few Spartans would have challenged these accepted ways, the punishments being severe.

In recent times, strange assemblages of disaffected youngsters, and not a few of their elders, have gained much power and not a little money from a variety of antics, sometimes violent and always promoted without decency.  Most famously perhaps, have been these groups’ ability to persuade often very confused people to kneel during occasions of national celebration (or perhaps a better word is ‘genuflect,’ given the quasi-religious underpinnings of secular wokism; the ‘great awokening’ as someone has dubbed it).  To genuflect in such a context is meant as a sign of one’s virtue, but is unwittingly a sign of crass ignorance.  One group kneels in obeisance to a secular ideology of astounding and platitudinous foolishness; the Spartan youth hurried to get in formation to obey the customary requirements of his time and place. Admittedly though, the tendency to lose oneself in what René Girard calls ‘mimetic contagion’ and atavistic longings is prevalent sub specie aeternitatis.  As Gustave Le Bon wrote in 1895, ‘An individual in a crowd is a grain of sand amid other grains of sand, which the wind stirs up at will.’  Perhaps the wisest approach is to avoid being swept into such a crowd in the first place.

What about ‘normal’ people?  Generally speaking, we are all subject to constant attempts to make us conform to mechanisms of control.  Some of this is achieved by the spreading of fear and divisiveness, although surely a variety of more subtle mechanisms are involved.  Edward Bernays wrote in Propaganda, published in 1928, about his understanding of mass manipulation.  He wrote with apparent approval:

We are governed, our minds molded, our tastes formed, our ideas suggested, largely by men we have never heard of. . .  it remains a fact that in almost every act of our daily lives, whether in the sphere of politics or business, in our social conduct or our ethical thinking, we are dominated by the relatively small number of persons . . . who understand the mental processes and social control of the public mind. . .

Such controlling supervision, at least in our so called ‘law and liberty’ nations, has most often been a kind of abstract but distant possibility; something that permeates the daily routines as we go about our lives, and until the recent upsurge of China Flu panic-mongering, often a rather faint and almost unnoticed, but nevertheless, constant, background noise.

In the communist regimes, terror and propaganda were and still are ratcheted up to the spreading of terror about what the ruling elites can do to you either through imprisonment, show trials, forced public confession of ‘misdeeds,’ torture, or a long dose of gulagging, and probably all of the above.  Interestingly, Theodore Dalrymple has argued that in such regimes the purpose of propaganda was mainly to humiliate rather than inform, persuade or convince, since the lies clearly did not correspond to reality.  More and more, it seems that powerful elements within our western nations are beginning to emulate this tendency.

For most post-enlightenment westerners such horrors seem far fetched.  This could never happen here, could it?  But the opinion formers of our lands are always busy beavering (or should I say ferreting?) away at new methods of ensuring that people toe the acceptable story line.  Perhaps the most successful recent attempt was the introduction of climate alarmism.  This strategy was so successful at cowing the public that one poorly-informed propagandist won the once-coveted Nobel Peace Prize for producing a slide-show.  The hysterical meanderings of this unintentional stand-up comedian were seriously erroneous.  Nevertheless, they helped to inflame public worries over a non-existent or at least vastly exaggerated issue.  And the lies and data-tampering surrounding this issue have continued ad nauseam, splattered about with the enthusiastic support of the media apparatus.

But perhaps this despair was starting to fade from public’s interest, or at least was becoming challenged more widely.  So the next opportunity arose ‘like thunder outer China,’ as Kipling might have put it. Not that this virus was inconsequential in its adverse effects on vulnerable populations.  But the global media and governmental anxiety peddlers have been spectacularly successful in spreading hyperbolic claims about the dangers.  The range of behaviors that have been curtailed or modified by draconian impositions is almost unimaginable – or would have been a few short years ago.

Of course, the overlay of this pandemic on top of the climate-change catastrophism has done wonders for the oligarchs, and for those with feeble skeptical abilities who are strung along by the nonsense.  These latter acquire a pleasant frisson of trepidation and self-congratulation.  The wokists lose nothing except their reason and virtue; the Spartan boy his life.