Giacometti: A Line in the Wilderness 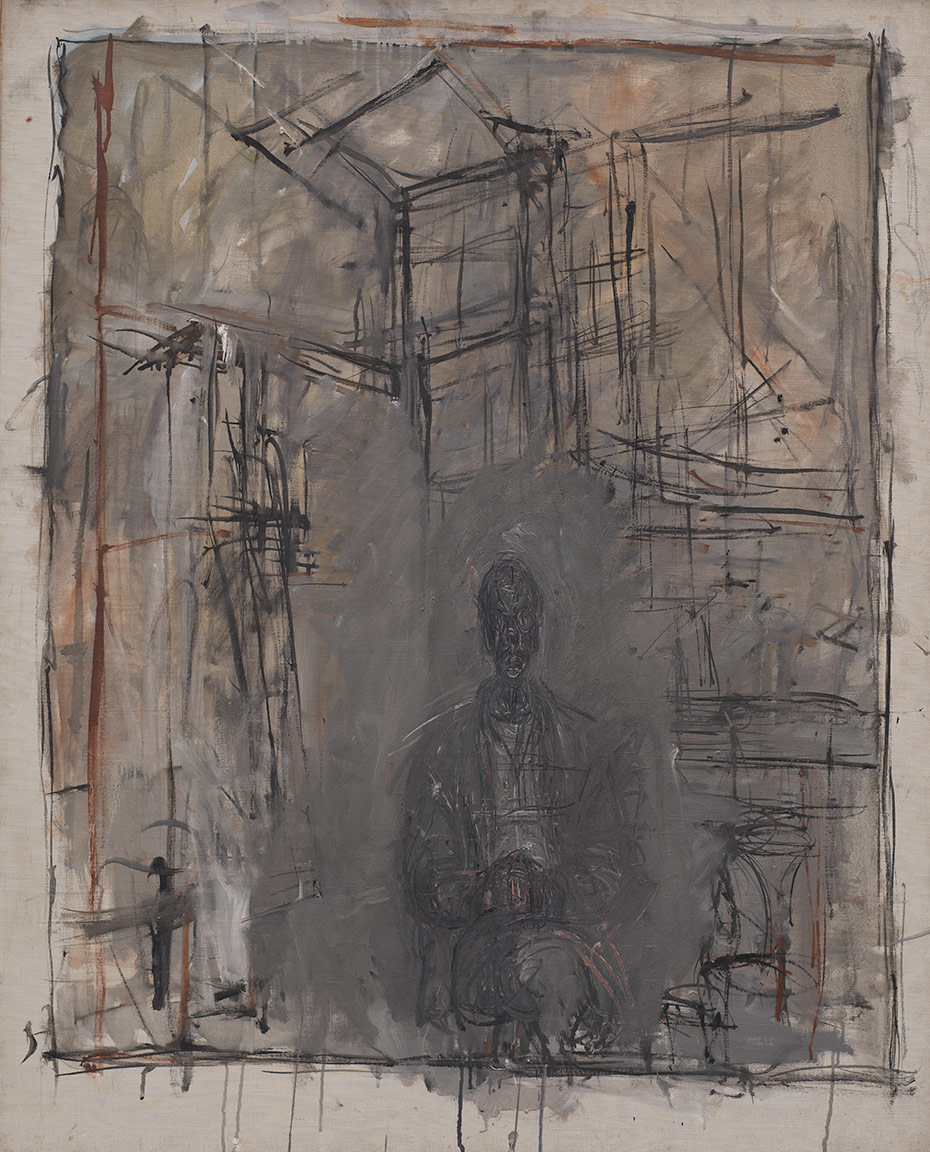 We who draw do so not only to make something received visible to others but also to accompany something invisible to its incalculable destination. —John Berger

To have courage for the most strange, the most singular and the most inexplicable that we may encounter. —Rilke

In the portraits, the slippery backgrounds echo the depthless grey matter of space. The astrophysicist, to better grasp the notion of the boundless, extends an imperfect numerical function to infinity while the painter drains the colour out of his pigment for the same effect. Each is asking how brief is a human life that is bound on all sides by the infinite.

To draw attention to the largest questions posed by existence, the Swiss artist Alberto Giacometti (1901-66) decided that the portrait would be the optimal place for his inquiry to take shape and find its proper expression. And even though in his life time he would come to be regarded by his peers as a portrait master, he always insisted (in his interviews) that the moment the sitter took his place, he became a mystery.

Giacometti’s special relationship with his amorphous muse (his brother Diego) was a constant source of angst and exultation, one which he refused to terminate or resolve to his satisfaction. His combined obsession and determination—pace Sisyphus—to confront the ineffable on its own terms has resulted in some of the most compelling portraiture in the history of painting. Both Jean Paul Sartre and Simone de Beauvoir were fascinated by their painter friend, who was never satisfied with his work and claimed he was a better writer than painter.

As much as any artist in the 20th century, Giacometti is its designated metaphysician, in large part because he is not interested in the flesh qua flesh but in the manner in which the bone structure and skeleton relate to and anchor the spirit, and call into question the mostly inscrutable, fugitive aspects of existence.

Why the line, his gallery of portraits asks, and not the infinite possibilities inherent in colour?

A line can mark off what is inside or outside, as in a territory. It is where inclusion and exclusion meet, and existence and non-existence are meshed together and reflected back. Giacometti’s line, which is a profusion of lines, is less interested in capturing the likeness of the person than the essence he embodies, which accounts for the haunting, disembodied feel to his portraits.

The line, unlike a volume of colour, invites us to look past or beyond it, into the dark matter of infinity, into the nothingness that shadows and animates the subject. Every time the sitter sits he is confessing that his temporality is not a choice but a destiny that cannot be double-crossed. Where Giacometti’s restless, nervy lines meet and conflict, man’s essential humanity is laid bare, but we’re not sure if it is consequent to the sitter’s momentary expression or his ambiguous relationship to the infinite.

Giacometti’s portraits continue the silence that begins with the “Mona Lisa” and implodes into Edward Munch’s “The Scream.” It is the silence of wind blowing through a hollowed out rib cage, of driftwood that is no longer a tree but whose treeness is indestructible.

Year after year, it is the same sitter, his brother Diego, whom the artist claims he doesn’t recognize. By entering this confession into the public domain, Giacometti is not striking a pose or bringing attention to his art through the cult of personality. He is proposing that in order to know anything at all it has to be stripped of everything that is familiar at which point it can be meaningfully encountered.

When the sitter arrives he brings with him his fears and vanity, his confessions and conceits, and the body with which he negotiates the world, all of which, under Giacometti’s incisive gaze, are illusory, as short-lived as a lifetime dropped into the abyss of eternity. Giacometti’s portraits singlehandedly open up a realm in the history of art where the artist and his materials convene in order to reveal man’s essential fragility and apprehensiveness before the fact of his finitude. And even though he is uniquely able to draw out and isolate the metaphysical dimension of existence, paradoxically no artist has captured appearances more emphatically, more robustly—and this holds true for his fleshless, mummy-like sculptures.

Just as Marcel Proust’s À la recherche du temps perdu illustrates how every life can be rendered meaningful as the first effect of intentionally reflecting on the past, Giacometti’s oeuvre invites us to reflect on the possibility of meaningful existence by rendering strange and foreboding that which is most near—the person sitting opposite us. Giacometti makes it his essential task to strip the sitter of all his daily entanglements, which conspire to protect him from his manifest perishability, in order to not humiliate but free him.

Since Giacometti is also a sculptor who must work with solid materials that withhold transparency and refuse disembodiment, how is he to make bronze reveal the human condition? How can tempered bulky matter be converted into a medium that speaks to man’s existential predicament?

Giacometti ingeniously solves the problem by creating quasi 2-dimensional figures, many of them drastically reduced in scale. His roughly hewed, match-stick like figures, such as “Walking Man,” almost have no breadth, and the heads are shrunk as if the artist doesn’t quite recognize who is before him, while the withering legs disappear into disproportionately large feet firmly fixed (nailed) to the ground—clinging to dubious epistemological certainties? So delicate and insubstantial are Giacometti’s sculptures, that like fledgling birds for the first time airborne, we want to take them in our hands and reassure them that they are here and now and not alone.

By depriving his bronze figures of their physical human dimension, he discloses their (man’s) frailty and resolute humanity. In their attenuated but dignified bearing, he both honours and defends their terrifying silence as well as their majesty. And as we stand before them, sometimes towering over them, we may come to discover our own (diminished) sense of proportion and the unexpected consolation an encounter with an artwork can provide.

It requires repeated acts of courage to make the human condition serve as one’s lifelong muse, which is why Alberto Giacometti’s portraits and sculpture rank among the 20th century’s most significant art.