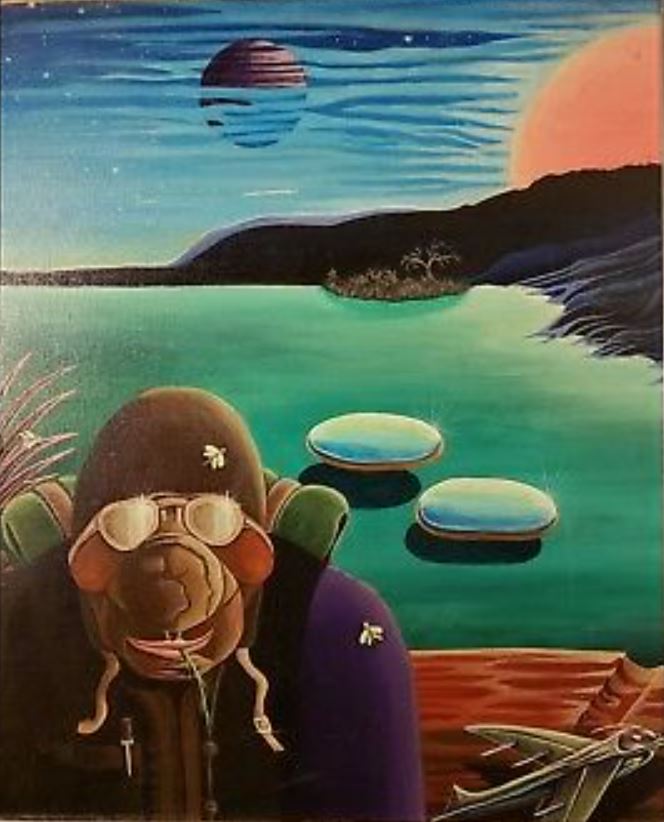 The turning point in history will be the moment when man becomes aware that the only God of man is man himself. Homo homini Deus![1]  —Ludwig Feuerbach

In The Essence of Christianity, Ludwig Feuerbach (1804-1872), the radical ideologue who served as Marx’s ideological godfather, pronounced that atheism liberates man from the illusion of transcendence and God. Instead of God, it is human history that propels man into an alleged divine position of self-importance, where hope and aspiration become the purview of social/political power that reduces human existence to the here-and-now. Feuerbach argues that humanity must become its own God.

Feuerbach’s pronouncement serves as the seat of postmodernism long before anyone uttered that word. Feuerbach is the inspiration for Marxism.

Through Marx and Lenin, Gramsci, The Frankfurt School, and Marxism’s many hybrid forms, including “critical theory” and identity politics, Feuerbach fashioned a world of Marxist social-engineering that is responsible for political repression, institutionalized murder, the creation of untold malcontents, and massive moral/spiritual dysfunction. Has anyone ever met a happy, well-adjusted Marxist? This is the tragic predicament of postmodernity that thoughtful thinkers and writers like C.S. Lewis expose.

Out of the Silent Planet

Out of the Silent Planet is the first novel of C.S. Lewis’ space trilogy. The other two are Perelandra and That Hideous Strength. Readers who are familiar with Lewis know that his stories are infused with reflection on God, transcendence, and the meaning of personhood. These are dominant themes of Lewis’ other works, including The Chronicles of Narnia.

Out of the Silent Planet is an imaginative work, as one would expect from science fiction. Yet I think that imagination needs to be qualified in Lewis’ science fiction stories. While most science fiction explores space travel, and the dimensions and anomalies of the space-time continuum, Lewis explores the inner life of his characters. He places his courageous, unsuspecting characters in spatial-temporal conundrums that defy logic.

In Out of the Silent Planet, Elwin Ransom, the main character who is a university professor and philologist, tackles truly spectacular situations. Let us keep in mind that the novel was published in 1938, before man landed on the Moon, even before the start of NASA’s Mariner and Gemini projects.

Faced with the challenge of non-existent technology that could transport man to Malacandra (Mars) at the time the novel was published, Lewis instead relied on his literary prowess and the charm of his stories. Many authors before Lewis used strange, often quirky forms of transportation to achieve space travel. Jules Verne and H.G. Wells are examples of this. Lacking convincing technology for space travel, Lewis instead emphasized universal aspects of storytelling: Characterization, spirited pacing, redeeming qualities of the story and, in his case, heuristic moral lessons. 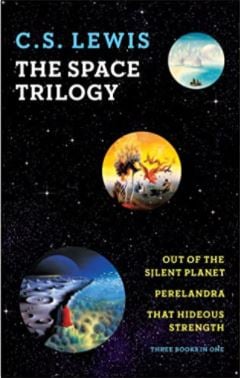 Out of the Silent Planet enables readers to view Earth and human life from an unimaginable distance. Earth (Thulcandra) is called the silent planet because it is isolated from other inhabited planets.

Upon arriving on Mars, Ransom is informed by the angelic ruler of Malacandra (Oyarsa) that during the ascent of man on Earth the planet was taken over by an evil being (Bent Oyarsa). Even though Lewis does not make it explicit, this aspect of the novel is indicative of Milton’s war in heaven between Lucifer and the archangel Michael, and the other angels that remain loyal to God in Paradise Lost.

Out of the Silent Planet is a story of good and evil. To truly appreciate the nuanced complexity of the story, readers must challenge themselves to ascertain the novel’s cultural, religious, and literary allusions. Is this possible in 2020?

Being the second installment of the space trilogy, Perelandra follows the unexpected adventures of Professor Ransom. Perelandra is Venus.

The story begins with Ransom telling his friend about his farfetched exploits on Malacandra, which make up the plot of Out of the Silent Planet. While his friend is shocked and skeptical about Ransom’s seemingly tall tale, he remains a good sport and goes along with it. As a novelistic technique, Lewis employs the first two chapters of Perelandra to tighten up the convoluted details of Out of the Silent Planet.

Ransom informs his friend that he must go to Perelandra because that planet is going to be attacked by the demonic Bent Oyarsa. Ransom does not know exactly what his job and function will be once he reaches Perelandra. However, Lewis offers the reader some clues, for the narrator contends that in the Bible, ordinary people are responsible for doing battle with principalities, “powers and depraved hypersomatic beings…” Battling evil is the centerpiece of Perelandra.

The space trilogy is science fiction infused with Christian symbolism, much as is the case in Lewis’s friend J.R.R. Tolkien’s The Lord of the Rings. The main difference between the two writers is the genres they employ for storytelling. While Tolkien and Lewis are considered fantasy writers, Lewis also wrote science fiction.

The space trilogy is an interesting work for several reasons. The novels were written during the fledgling period of science fiction, right before and after WWII. Since that time, science fiction has turned sinister and perhaps too self-absorbed for its own good. Being an early exponent of the genre, Lewis’ science fiction stories should be critiqued on their novelistic merit, not smug criticism that takes its motivation from the standards of science-fiction, circa 2020.

That Hideous Strength is the third and final book in the trilogy, even though it can be read as a stand-alone novel. It is the longest of the three, and takes place on Earth, not Mars and Venus like the first two.

Readers familiar with Lewis’s The Abolition of Man recognize That Hideous Strength as a dystopian novel that makes bare the evil of social-engineering. Lewis puts on display evil’s ability to camouflage itself as chic and smart, terms that are trending today in secular and pagan circles. Though, this should not come as a surprise, for much of the novel takes its inspiration from the rapid spread of social-engineering that England experienced shortly after WWII. That Hideous Strength was published in 1945; Lewis referred to it as a fairy-tale for grown-ups.

One profound eye-opening aspect of That Hideous Strength, especially for younger readers, is that it exposes how widespread social-engineering was at the time of the novel’s publication, and how that form of societal control embraced a sinister, deterministic campaign against free-will.

Lewis called the novel “a tall tale about devilry,” whereby “the outer rim of that devilry had to be shown touching the life of some ordinary and respectable profession.”[2]  The profession that he makes the center of attention in That Hideous Strength is university professorship.

Lewis unmasks evil by making it wear a human face. The author enables readers to view evil as a perpetual reality that human beings must contend with—from time immemorial. The strength and appeal of evil over man in the novel is its ability to substitute reality with appearance, which is the most essential component of ancient metaphysics in Plato and Aristotle, and the cornerstone of man’s fallen state, as Christianity conceives the problem.

The dilemma that Lewis sets up in the trilogy begs the question of why it is so difficult for man to embrace objective reality and reap the fruits of a well-grounded existence.

This problem takes on an added dimension in postmodernity through the call of nihilists to annihilate objective reality and replace it with sensualism and relativism. Lewis suggests that evil is a profound disruptor of man’s capacity to perceive the nature of truth, and what this means for a settled and contented existence.

Lewis suggests that man must sublimate the stress of having to identify reality from appearance, so that human life does not become consumed by the pursuit of worldly pleasures and the temptation to reduce life to mere biology. According to Lewis, conscientious reflection on good and evil is what it means to have a moral compass.

Without exhausting the details of the plot of That Hideous Strength; a demonic organization and Think Tank: National Institute for Co-ordinated Experiments (N.I.C.E.) takes over a college and town. This becomes N.I.C.E.’s base to destroy man’s free will through a program of re-education referred to as “objectification” that strips man’s individuality and capacity for self-rule.

N.I.C.E. is a combination of Marxism, paganism, the occult, and plain wickedness that makes it a formidable vehicle of disinformation, rioting and civil unrest.

N.I.C.E. is ruled by demonic forces that have taken over Earth. In That Hideous Strength Lewis ties in the elements of the two previous novels, even though this does not become fully apparent until well into the novel.

One reason that N.I.C.E. is adamant about taking over the college and surrounding town is because the college owns the woods where Merlin, the magician of the King Arthur legend, is buried. N.I.C.E. hopes to combine Merlin’s magical power with that of the demonic forces that have taken over Earth.

Most chillingly accurate and prescient is Lewis’ description of social-engineering in the form of color revolutions, which organize riots on demand, orchestrated by intellectual elites and radical ideologues to intimidate and destroy man’s confidence in democracy, and the importance of self-rule in democratic states.

N.I.C.E. is diabolically adept at creating the illusion that in democracies elected officials are really illegitimate, and thus must be removed from power through coercion, calumny, and violent means.

Lewis describes a form of radicalized, one-party state journalism that fanatically forges public opinion, and that presents appearance as truth, if only through brainwashing and repetition of lies ad nauseum.

PrevAdult Life
If You Worked for the Trump Administration, You’re Not Welcome at HarvardNext