Hanging by a Thread 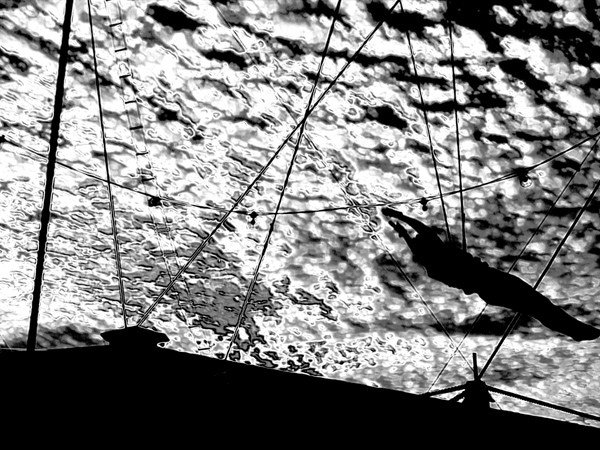 Hanging by a Thread, James LePore

When I first met my wife, we went often to a Thai restaurant that was across the street from the LIRR’s Greenvale station. We parked in the station’s lot one night and, as I usually did when we parked there, I scanned the well-lit platform for pictures. I didn’t take any, but I made the mistake of making eye contact with a guy who looked a little off to me, a youngish, slightly disheveled guy with a backpack. At least I thought it was a mistake at the time. In the restaurant, we ordered and were sipping hot sake when sure enough the disheveled guy walks in, comes right over to me and asks for money. Just five dollars, he said, I need to get to the city. My first thought was addict. I studied him. I had known a few addicts, my younger brother for one. This guy fit the picture and didn’t. I wasn’t sure. A shitbum for sure, though, I thought. An idiot. I had just spent two weeks in San Francisco walking the streets and taking pictures and had seen enough of this type to last a lifetime. I was about to say no, but something stopped me. It was Karen. She hadn’t said a word, but I didn’t want the relationship, which I knew—don’t ask me how—was going to last forever, to be tainted. I wanted it to be blessed, and perhaps here was an opportunity. So I gave the guy ten dollars. I figured we’d be twice-blessed. He thanked me profusely and rushed out, as if he was really going to catch a train.

The next morning there was a report on TV of a derailment of an LIRR train on the Oyster Bay Line near Mineola, with several injured and one dead. The fatality was identified as Keith Armstrong of Hempstead, New York, with no other details and no picture. I didn’t know Long Island very well so I went online and found that the Greenvale station was on the Oyster Bay Line. You changed in Mineola to get to New York. The odds of Keith Armstrong and the disheveled guy being one and the same were a million to one, but you can understand my concern. Had I bought Keith’s ticket across The River Styx? The next day, I found Keith’s obituary and went to the wake at a funeral home in Glen Cove. I arrived a few minutes before visiting hours began, hoping to get a quick look and then leave, but there was an older woman at the casket, holding a rosary and looking down at the body.

“Did you know Keith?” she asked.

“Yes,” I replied, eying the body. It was him, the disheveled guy.

I shook my head and was about to ask what she meant, but I knew. My brother had abused my mother for twenty years before he OD’d in a flop house in Brooklyn.

“I did everything I could,” the woman said, “but he was a bad seed. He had a plate in his head.”

What could I say? Nothing. We’re all hanging by a thread.

PrevVachanas
But His Mind Climbed Up and MoreNext