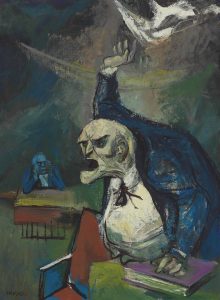 Since Copernicus, man seems to have got himself on an inclined plane—now he is slipping faster and faster away from the center into—what? Into nothingness? Into a penetrating sense of his nothingness? —Nietzsche, The Genealogy of Morals.

Hatred of human reality breeds disconnection from reality, ultimately, dissatisfaction with oneself, and alienation from the world and other people.

This hatred is predominant in a portion of the human race that wishes to control aspects of reality that are out of its control. The freedom and also burden of human beings lies in understanding that human life must abide by objective structures that we must respect. Our ability to recognize the primacy of objective reality determines the tonic, or lack thereof, of human existence. This is a practical matter.

Naturally, a person’s failure to control reality turns to resentment. Resentment destroys the capacity for perspective, thus cutting off the human person from the possibility of development in all senses of the word. Resentment atrophies a person’s sense of self because, while encapsulating the self in a narcissistic bubble, it simultaneously deforms objective reality by shunning the nature of objectivity.

What more damaging form of resentment is there than the inability to wear one’s skin with nobility of spirit? The absence of nobility places the onus of life and death outside oneself and evades responsibility for life, while finding the mystery of differentiated existence a burden to embrace. This attitude creates a safe house of self-protection against the structure and demands of human reality, precisely because reality is the ultimate dispenser of equality.

The quest to change the architectonic of reality in order to eviscerate the riddles of existence make us homeless in our own person. For such people, life is a savage daily struggle that defies meaning and purpose, which more often than not, ends in disarray.

Subjectivity and the Incarnate Self

The inability to confront oneself as an incarnate being means that one must settle for mere earthly mortality that seeks perpetual refuge in the worldly.

The latter signals the secular messianism of the here-and-now: the absence of grace that devours the self in aimless seeking of ever-greater forms of satiety. Self-hatred cannot bear to accept any form of finality, even the limited domain of the choices we must make.

Satiety is a threat to the messianism of the-here-and-now because it places a mirror before the incapacity to cultivate the fullness of being. This is one of the staple paradoxes of nihilism that unsuspecting people readily embrace.

The inability to cultivate the fullness of being in the human person leads to frustration with consciousness, which is the conduit for self-reflection that cannot be put on hiatus or turned off. Man’s struggle with consciousness creates a rift between the will and reason’s ability to enact the mechanism of checks and balances that establishes balance in the human person.

That is, the form of consciousness (as mere perception) that makes animal life a sort of instinctual roving camera over terrain, other animals, and the acts of survival that it must perform daily is never encountered by animals. Survival can be taxing for animals, but the mechanism of life is made for that struggle. Time and decay take care of the rest.

This is not the case for man. Man cannot afford to treat the struggle for survival as a mere mechanism of reaction. That is, mere perception that does not lead to conceptualization of the world through self-reflection, and that does not become pro-active. Only for man, does consciousness pop up as the measure and arbiter of consciousness itself. Consciousness seeks to know the source of its illumination. What does this entail for man, we ask?

Consciousness becomes bifurcated, as frustration in man’s inability to control reality turns to hatred of reality.

As a consequence, consciousness turns on itself, fighting reason, common sense, intuition, realism, and objectivity.

The inability to simply let things be fosters hatred of people who are well-adjusted to reality. Hatred of human reality eventually implicates other people in corrosive social/political policies, when in essence, it is merely a massive failure of individuals who reject man as a moral/existential being. Personhood is the Catholic philosopher’s name for the latter.

Man’s frustration with reality readily turns to escapism: narcotics, alcohol, worship of celebrities, superheroes, and other forms of infantilism. This is acceptable as long as it does not turn ideological.

This neurosis can be nipped in the bud through self-reflection, except that postmodern dysfunctionality has turned neurosis into a fashionable trend. This is especially true of young people. The important thing is not to let self-hatred neurosis become radicalized, for when it does, it can only find an outlet in the destruction of the mores that dysfunctional neurotics deem the culprit of their condition in the first place.

Part of the refusal to accept human reality comes from the denial of God as the absolute. For this reason, haphazard, ideological absolutes are created as substitutes. Though, social/political absolutes must be rotated and re-created on demand. These absolutes must be customized to the whims of the neurotic. This only acerbates the problem because there comes a point when the false promise of controlling and micro-managing human reality is no longer sustainable. More destructive neurosis ensues as a result and greater hatred of reality.

In essence, consciousness that becomes aware of itself through self-reflection is a measure of how well consciousness interacts with human contingency. The value of this process is essential for man to become well-grounded in human reality, even though, naturally, we may not accept all of the tenants of human reality as desirable.

A measure of consciousness as self-reflection is that self-awareness ultimately determines how well persons adjust to the exigencies of daily life. This process can be understood as the foundation and embrace of life-affirming values.

If Only Malcontents Went to a Mountaintop and …

Whether Aristotle is correct that man is a social animal remains an open question. However, given the reality of agglomeration, man must of necessity become sociable.

This is a good reason why malcontents gravitate to forums where they can inflict vast discomfort and suffering on the lives of other people. Attention-seeking is one of the avenues that malcontents welcome to assuage their pangs of meaninglessness. Of course, this bodes badly for everyone else. This is the postmodern tragedy.

What are the most effective arenas to inflict damage and torture on others? Two quickly come to mind: the social/political arena and the world of values. In the former you can execute the destruction of values on a massive scale.

How much is hatred of human reality a root cause of postmodern man’s dysfunctionality? The answer is gargantuan, especially when considering the dearth of constructive values that inform the postmodern world.

PrevOn Ideology
Chesterton’s Wild Ride: The Man Who Was a ThursdayNext