Having Our Retinas Scoured with Brillo

The Creation of Adam, Michelangelo, 1512

Whatever happened to beautiful architecture, paintings or all things artistic? A few years ago, an art teacher called Robert Florczak, gave his graduate students a test. Unbeknownst to his class, he showed them a blown-up image of his paint-stained apron, which closely resembled a Jackson Pollock work. (Pollock’s paintings and the apron vaguely resemble the intricate pattern of linear fractures on the surface of Jupiter’s smallest moon, Europa, or the zig-zag chaotic pattern of a bird’s nest.)

Anyhow, the students were asked to “analyse this Jackson Pollock painting and explain why it is good”. It was a kind of emperor’s new apron, if you will. The answers given included the words: “Bold”, “Evocative”, “Unconventional”, “Perfectly balanced in its randomness”. Florczak said: “I don’t blame them [students]. I would probably have done the same since it’s nearly impossible to differentiate between the two. And who will determine quality is another challenge I’m given.”

The question arises: Why is modern art (and architecture) so bad? Is it the fault of town planners, the museum heads, gallery owners, or critics who encourage such trashy works as opposed to the transcendent masterpieces of the past? And why does disdain for the past keep rearing its ugly head, from brutalist architecture to an unmade bed or a crucifix in a jar of urine? 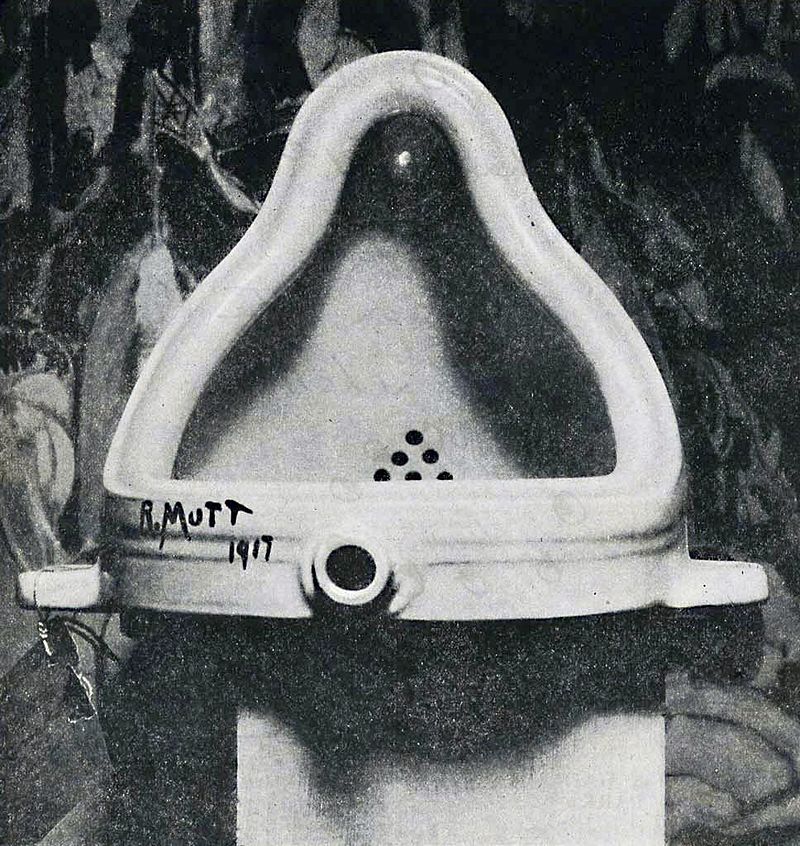 Some years ago, I was strolling around a museum of modern art when I came across an empty room with a small chair by the window. On the edge of the chair was a wrapped condom. In the adjacent room, was a video exhibition with images of ‘artist’ Joseph Beyes covered in honey while explaining art to a dead hare (I often feel like that when explaining the theological moral argument). I didn’t enquire as to what the male contraceptive on the chair was, as the porter was a young female, and I feared embarrassing both of us should it have been a prank. But in today’s [anti]culture of the fake, kitsch, strange and lurid, one never knows. This wasn’t the case when I was in Nice three years ago. I visited the museum of modern art and on display were a ‘Can of Shit’, by Italian ‘artist’ Piero Manzoni, and a signed urinal (‘Fountain’), by Marcel Duchamp (R). And no, they weren’t pranks.

While making a BBC documentary on art almost a decade ago (Why Beauty Matters), the philosopher Sir Roger Scruton wrote in the Daily Mail: “Galleries of contemporary art are filled with the debris of modern life, with subhuman figures purposefully designed to demean and desecrate the human image and with ludicrous installations that mean nothing at all. This lapse into ugliness is nowhere more apparent or more intrusive than in the desolate city centres produced by modern architects.”

He said that, in the programme, he decided that he should also show a wasteland, and so he took the film crew with him to Reading, the town in whose shadow he grew up. “As I looked around the centre, I recognised nothing that I had known,” he said. “Gone were the lovely Victorian terrace streets, elegant public buildings and smart hotels. In their place were huge, grey, concrete slabs. The welcoming surroundings of the old town centre had been replaced by buildings deemed to be ‘useful’.”

Scruton said what happened in Reading happened to Coventry, Birmingham, Liverpool, Leeds, Newcastle and hundreds of other former beautiful towns. As for Birmingham: In 2012, Theodore Dalrymple gave an excellent talk to the Traditional Britain Group on the topic of ‘Distain of the Past’. In that talk, he spoke about the slaughter of British cities after World War 2, particularly fine architecture, replaced by Brutalist eye-sores.

He said: “A few years ago, I went into an establishment in Birmingham in an area that could properly be described as a visual Hell; like having your retinas scoured with Brillo. And in this establishment, there was on the wall an aerial photograph of that city before the war; it wasn’t Rome or Paris, of course, but it was a fine example of Victorian and Edwardian urbanism.”

Dr Dalrymple said to the receptionist, while looking at the photograph, “wasn’t it a shame about the war”, to which she replied, “It wasn’t the war; it was the council”.

Our architects and town planners have done infinitely more damage to our cities than the Luftwaffe ever did, said Dr Dalrymple. He added that the man in charge of the city planning in Birmingham, who was knighted for his services to “unutterable ugliness and destruction”, wanted to pull down every building in the city that dated from before 1950. “And he got quite far but luckily he had a fatal heart attack before he could complete the vandalism which he had started”. 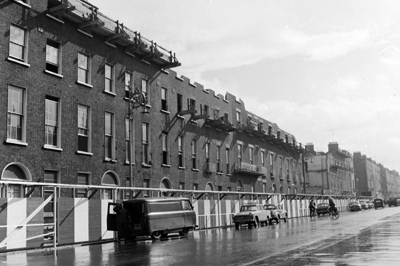 Another case of architectural vandalism occurred in Dublin during the mid-1960s. In what was described by conservationists as one of the worst acts of vandalism in the history of the State, some 16 Georgian houses were demolished to make way for the electric supply board’s headquarters in the city’s Fitzwilliam Street. This street, called the “Georgian Mile” (L), was the longest Georgian facade, from Mount Street to Leeson Street. However, the architect argued that Georgian houses were “never intended to last more than a lifetime” and it should be clearly understood that “they cannot be usefully preserved at all”. The façade has now been reinstated to a less-severe brutalist-block style but it’s still no match to the original Georgian splendour.

It’s difficult to know if such architectural vandalism is a deliberate tactic to break up communities and, thus easier control the masses by the State.

But aside from architecture, is the controversial style of installation the emperor’s new clothes of all the arts? A few years ago, a cleaner mistakenly threw away contemporary artworks meant to be part of an exhibition in southern Italy. According to a report in the BBC, works made out of newspaper and cardboard, and cookie pieces scattered across the floor as part of Sala Murat’s display were thrown out. Lorenzo Roca, from cleaning firm Chiarissima, said the unnamed cleaner was “just doing her job”. He added his firm’s insurance would cover the value of the art, estimated to be around 10,000 euros (£8,200).

According to the BBC report, security noticed a number of items were missing when the venue, in the province of Bari, opened during a week-day morning. “It later emerged the cleaner had handed them over to refuse collectors, thinking it was rubbish left behind by workers who set up the Mediating Landscape exhibition”. 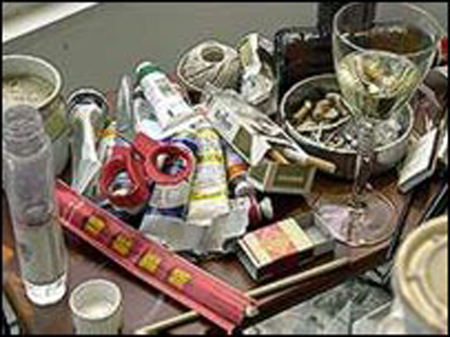 A similar thing happened In 2001 to a Damien Hirst installation at London’s Eyestorm Gallery (L). The installation consisted of a collection of beer bottles, coffee cups and overflowing ashtrays, all of which were cleared away; while in 2004, on a display at Tate Britain, a bag of paper and cardboard by German artist Gustav Metzger was also thrown out.

Robert Florczak again: “Why do we have to be victims of all this bad taste? We don’t: by the art we patronise at museums or purchase at galleries, we can make our opinions not only known but felt. An art gallery after all, is a business like any other. If the product doesn’t sell, it won’t be made. We can also support organisations like the Art Renewal Center; and we can advocate the teaching of classical art appreciation in our schools. Let’s celebrate what we know is good and ignore what we know is not.” Florczak has a point but some times on rare occasions it’s difficult to tell the good from the bad. Take for example Picasso’s controversial mural depicting the 1937 massacre of a Basque village. (This painting, entitled ‘Guernica’, (below) was used to compliment my July essay.) Visually, the painting is spectacular, despite its abstract brushstrokes. For many, it conjures up images of chaos, war and societal breakdown. And the same could be said for other such abstract Picasso paintings. But would they be so appealing if some non-famous person painted them?

I once asked an atheist friend, who was an artist, the following: Imagine someone had two paintings; one was an original painted by Picasso and the other, of the same painting, a forgery, undistinguishable from the original; which one would you want to own? He said the original. His reason was it was the original painted by the great artist. This is irrational, as on Materialism (atheism) neither one is better than the other. Only if there’s a spiritual dimension can there be a difference.

If in today’s culture, modern art is soul-destroying and solely based on “a name”, then think twice about the next time you make your bed and tidy your room if you believe fame is on the horizon. An unmade bed could fetch over £2.5m. As for a can of . . . well, let’s not go there.