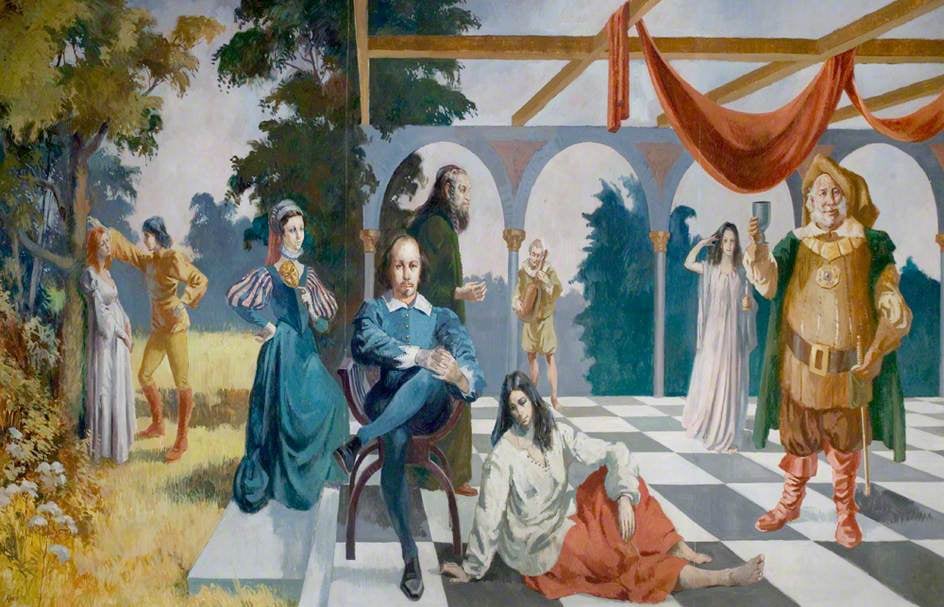 Shakespeare and his Characters, Arthur Keene, 1974

‘The drama’s laws, the drama’s patrons give’ said Dr Johnson. This is no longer true. The drama’s laws are now laid down by directors, associate members of the liberal ruling class, who are nearly all female. Their prime agenda consists of non-traditional or ‘colour-blind’ casting, coupled with gender-free casting. It is an agenda that echoes politics: the all-women short list has mutated into the all-women cast list. Productions are now known as ‘ovarian Shakespeare’, and the priestesses of change are well launched into the Gramscian long march through the castings.

These policies started with daring raids upon the traditional, and then hardened into a new orthodoxy. Michael Boyd, as an associate director of the Royal Shakespeare Company (RSC), made his name with a Henry VI (2000) in which the king’s part was taken by a black actor, David Ojelowo. Ojelowo’s family came from Nigeria, and his choice as Henry Plantagenet was much discussed in the press (though not among the stage aristocrats, presumably too polite to take notice of a Nigerian Plantagenet on the throne). The main objection was that theatre is make-believe, and that this aim is defeated when the audience cannot accept the truth of what is portrayed on stage. Dramatic conventions start from a premise unique to drama, in that the stage is different from other walks of life. Acting is not a job like other jobs because it depends upon casting, and casting is not commensurate with other rights that we take for granted. An actor is his body. In other jobs people are appointed and promoted on qualifications and experience. Not so actors, who have to live with their height, vocal pitch, perceived attractiveness, looks, and so on. In A Midsummer Night’s Dream, the tall blonde gets to play Helena and the short brunette plays Hermia. They might like it the other way round, but the play is written that way.  Still, Boyd was well rewarded for his audacious casting; he was knighted in 2012, ‘for services to drama’.

Actors now face two casting conventions on the stage, ‘colour-blind’ and ‘colour-conscious.’ ‘Colour-blind’ operates on the same principle as employment in everyday life: the audience is to ignore the ethnicity of non-white actors, it does not exist. But in ‘colour-conscious’ productions, the drama’s point is made through a visibly obvious casting. This duality can only exist in the living theatre, for films treat ethnicity literally. The camera is the absolute witness of truth, and a black actor in a film is always taken to represent a black in real life, as with whites. A contemporary play is also bound by the facts of present-day life. In classical drama, however, these guidelines are much relaxed. You can do what you like with Euripides, and many classics, especially Shakespeare, are open to imaginative castings on stage, for Shakespeare welcomes the non-traditional. His wide-ranging, eclectic, often anachronistic plays lend themselves to original and surprising castings. But even here this freedom has natural limitations.

Certain problems cannot be willed away. The first is kinship. Many stage characters have mothers, brothers, etc. who appear on stage, often in the same scene. In Hamlet, there is no getting away from the racial solidarity of the Prince, his mother, and Claudius. I knew a front-rank actor who was convinced that King Lear had three different queens, hence a black Cordelia was permissible. Shakespeare’s Histories remain the biggest hurdle: all the royal figures and nobles are white (they are always addressing each other as ‘cousin,’ which they are). At Stratford-upon-Avon a few years ago, the appearance of a black actor playing the King of France in King Lear was greeted with an angry outburst from a French woman in the audience. As the King delivered the line, ‘This is most strange,’ the French woman said audibly ‘It most certainly is.’ Whatever the edicts of the director, audiences withhold their private assent.

Then, the dynamics of the play can be blocked by an insensitive casting. However you cast Othello (a role now part of the acquis communitaire for blacks), Iago has to be played by a white actor, else the play is destroyed. And yet the RSC lately cast a black actor as Iago. The white Othello is of course a familiar conceit, as in Washington, D.C.

Finally, there’s the historical sense, which—however vaguely shared by the audience–holds that some castings would be out of place. A clear instance is Jane Austen movies and plays, in which the audience expects total fidelity to its setting, the England of 1800-1810. No concessions are made to class or ethnicity. Period drama, as distinct from classic drama, has its own laws.

It seems clear that a universalist prescription—cast an actor of any ethnicity for any (classic) part—runs into serious objections. What then are the reasonable openings for non-white actors in plays which, as matter of historical fact, were written with white actors in mind? In Shakespeare, there are two major roles for black actors, Othello and Aaron the Moor in Titus Andronicus, besides a slight comic part for the Prince of Morocco in The Merchant of Venice. You might add Cleopatra, of whom Philo reports that she has ‘a tawny front.’ But white actresses are singularly reluctant to give up this star part to their ethnic sisters. I have seen only one, Josette Simon, who in the RSC Antony and Cleopatra divested herself of her garb in the final disrobing scene. This full disclosure of her tawny front was, as Sir Humphrey might have said, ‘courageous,’ for Simon was 57 at the time. Still, her earlier doubling as Hippolyta/Titania in A Midsummer Night’s Dream, though certainly untraditional, responds to deep chords in the text. Hippolyta is an ‘Amazonian’ (and thus, of course, comes from Africa not South America). Titania is a creature of the subconscious, the world of fantasy. Some decent middle-range parts, like Enobarbus, do not specify race. And there are always ‘trainee’ parts for young actors, usually spoken of as ‘spear-carriers’.

A strong case can be made for adventurous castings in Shakespeare, but the tone has changed. In the RSC’s Much Ado About Nothing (2002), the troopship is just back in Messina from the Abyssinian campaign of 1936. They had to negotiate a disagreeable line, when Claudio has to say of his arranged marriage ‘I’ll hold my mind, were she an Ethiope.’ And Ursula was played by a black actress. Claudio fixed her with a direct gaze, and said firmly the fatal words. Ursula tossed her head at this disgraceful statement, and flounced off. The audience liked that, and so did I. These matters do not have to be approached with the high seriousness of a Victorian tabernacle.

But that was in 2002. In April 2018, the RSC put on a minor Restoration comedy, and cast a black actor to play a white nobleman. At this, Quentin Letts, the drama reviewer of the Daily Mail, refused to be cowed and openly criticized this ‘clunking approach to politically-correct casting.’ He went on to make a declaration of independence: ‘at some point the management will have to decide whether their core business is drama or social engineering,’ and claimed that they are under pressure ‘to tick inclusiveness boxes.’ The RSC Artistic Director, Greg Doran flew into a rage, made public in the hospitable pages of The Guardian: ‘he seems to demonstrate a blatantly racist attitude to a member of the cast.’ He was joined in the same pages by fellow-travellers calling for Letts to be banned from reviewing. Letts left the Telegraph and now

writes for The Times, but not as drama reviewer. Only one version of truth is to be allowed: race is so important that it is racist to notice it.

The RSC had become a stronghold of the angry and intolerant Left theatre, which aspires to the powers of the Inquisition. Castings that were audaciously experimental, a couple of decades ago, became an orthodoxy. The leaders of

the theatre brooked no opposition to their doctrines, and heretics met the full force of the religious and temporal sanctions. Reviewers backed off from confronting the hailstorm that broke over Quentin Letts—reviewers, after all, do not choose reviewing as a career alternative to racing car driving. Hamlet’s idea of the purpose of playing, ‘to hold as ‘twere the mirror up to nature,’ was abandoned to the politically correct ideals of the Left’s commissars. The life-project of the great Sam Wanamaker was the Shakespeare Globe in Southwark, a theatre modelled upon the original Globe as Shakespeare knew it. The newly-appointed Director, Michelle Terry, had the avowed aim of 50/50 casting, a gender balance unknown to Shakespeare and exceedingly odd today. To celebrate her arrival, the Globe announced a production of Hamlet with Ophelia played by a man and the Prince by Michelle Terry. The reviewers were docile—the Stalinist execution of Quentin Letts was enough for them—and the takeover by the Left of the commanding heights of the Shakespearean stage was all but complete.

And then Covid struck. It was a catastrophe for theatre, most especially the RSC. The commanding heights of the Left looked down on a wilderness of closed theatres, bankrupt companies, and unemployed actors. Directors had nothing to direct. Around 90 jobs at the RSC were cut and, while the Arts Council came up with a large sum in aid, this is a loan—and not, as always in the past, a grant. The loan will remain on the Company’s books, for future repayment, and their free-spending, income stream-guaranteed days are over. Elsewhere, Channel 5 announced the casting of Jodie Turner-Smith, a black actress, as Ann Boleyn in their period TV drama. This was a provokatsia, daring the Fates at a time when all conventions and practices are under intense strain anyway. The future will reveal whether the stage’s ‘core business is drama or social engineering,’ and what form the coming imperatives will take. It looks as though political correctness is not the inviolable doctrine of the future, and my guess is that the new Shakespeare will not closely resemble the old. The Left’s takeover is of an impoverished estate beset with debt, ruinously overmanned, and out of touch with main currents of social thought.