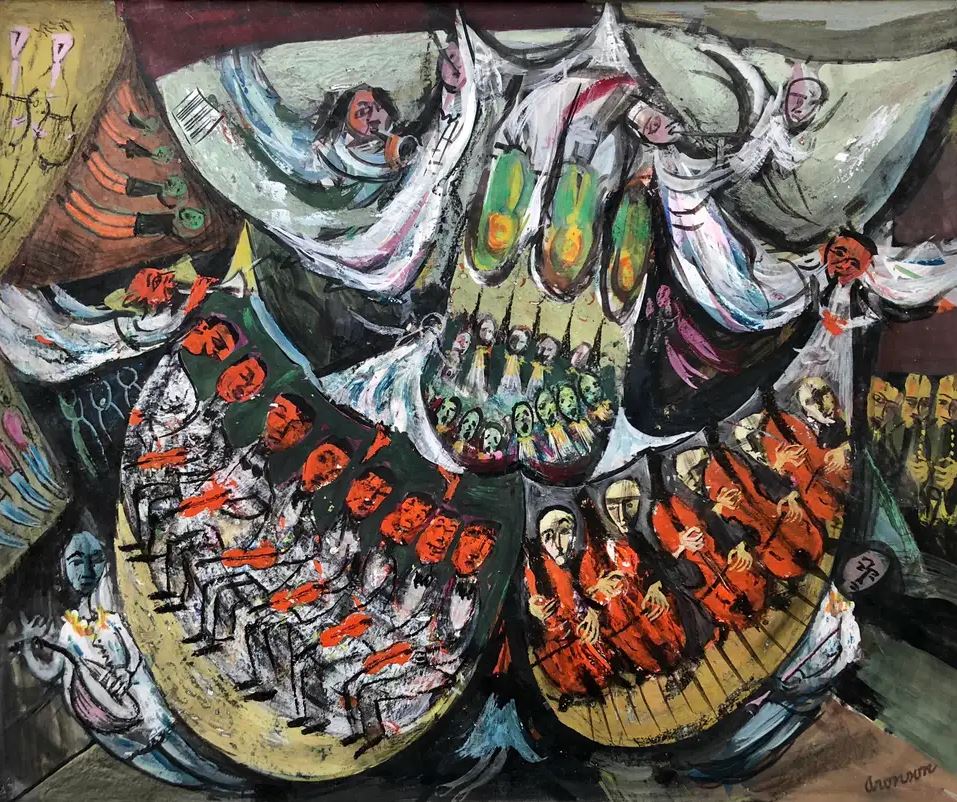 When the Austrian composer Arnold Schoenberg escaped from Germany’s Third Reich in the 1930s, he came to Los Angeles, where he first taught composition at USC, then at UCLA (University of California, Los Angeles). By then he was held in high esteem in the classical music world as one of its greatest innovators. Along with Alban Berg and Anton Webern, Schoenberg belonged to the Second Viennese School (Zweite Wiener Schule), which pioneered and promoted atonality and then dodecaphony, or twelve-tone serialism. In their view, the deliberate choice of a series of notes from among the twelve notes would free composition from the tonal gravitational field.

Ever since Claudio Monteverdi, tonality had been the key factor in, and ruler of, the art of composition. It was always the same story: leaving the home key (the tonic, or tonality of choice), exploring other key areas, and finally returning. Of course harmony, and that is, chord progression, without a gift for melody would not mean much. By the time romantic composers came along, starting with Schubert, modulation complicated the story, but did not really change it.

In music, modulation consists of moving from one key to another, without necessarily changing the key signature. The composer takes some license, leaves home, explores other places, only triumphantly to come back home, both he and the composition enriched by a longer and more complex exploration. Rather than revolting against the gravitational field of tonality, such a procedure strengthened it, because when the listeners were taken back home, the conclusion was all the more satisfying. Richard Wagner, and after him the late romantic Gustav Mahler, stretched the possibilities of tonal composition to its limits, and some musicologists maintain that toward the end of his life Mahler went beyond them. At around the beginning of the twentieth century, composers were no longer content with tonality, and set about finding new approaches.

Claude Debussy employed non-traditional scales and chromaticism, resulting in his version of impressionism; Alexander Scriabin resorted to the circle of fifths and, consequently, pentatonic scales; Igor Stravinsky innovated in many ways: the relentless ostinati of The Rite of Spring, for example, were unlike anything that had been heard before, so much so that decades later composer Philip Glass would write about the composition’s “primitive, offbeat rhythmic drive”—with rhythm having been somewhat of a missing ingredient in classical music. It was always there, of course, but not in a prominent role.

Debussy, Scriabin, Stravinsky are all still enjoyable, perhaps because they never gave up all reference points, but rather created new ones the listener could hang on to.

Conversely, Schoenberg and the other members of the Second Vienna School made certain that music, through their arbitrary dodecaphonic manipulation, would do away with its habitual reference points and become completely abstract, losing, in the process, the support of ordinary people, who could no longer understand it.

The Second Vienna School, and its epigones all the way to Karlheinz Stockhausen, had the most prodigious—if involuntary—effect on the history of music in the twentieth century. The music it championed, atonal and then dodecaphonic, abstract, experimental, abstruse and, to most ears, incredibly boring as well as incredibly ugly, was unintelligible. In some listeners it induced nausea. A new language had come into being (the French would call it langage, the Italians linguaggio), one that very few understood. From composers such as Offenbach and Johann Strauss II, whose music was of universal appeal and would even be whistled in the streets, to Arnold Schonberg, Alban Berg and Anton Webern it had been a fast transition. Schonberg regarded his new musical language—dodecaphony—as equivalent to Albert Einstein’s discoveries in physics. During a walk with his friend, the musicologist Josef Rufer, the composer famously stated, “I have made a discovery that will ensure the supremacy of German music for the next hundred years.” In fact, through dodecaphony music went from being a language that everyone in the western world could understand to an obscure language that very few spoke.

To make things worse, or better, depending on one’s point of view, Theodor W. Adorno, the philosopher as well as trained musician who belonged to the Marxist Frankfurt School, wrote the influential The Philosophy of Modern Music (1949). In it, he essentially polemicized against beauty itself, having beauty become a component in the ideology of advanced capitalist societies. Art, and music, contributed to the sustainability of capitalism by making it “aesthetically pleasing” and “agreeable”. Only avant-garde music would tell the truth by representing human suffering. “What radical music perceives is the untransfigured suffering of man […] The seismographic registration of traumatic shock becomes, at the same time, the technical structural law of music. It forbids continuity and development. Musical language is polarized according to its extreme; towards gestures of shock resembling bodily convulsions on the one hand, and on the other towards a crystalline standstill of a human being whom anxiety causes to freeze in her tracks […] Modern music sees absolute oblivion as its goal. It is the surviving message of despair from the shipwrecked.”

Ugliness, in other words, was to be reproduced in the new language of avant-garde music, and art in general.

A few months before coming to L.A. as a student at USC, I had driven through an Italian national park. Sitting next to me was a girl who thought of herself as being alternative and avant-garde. She was, above all, a hard-core ecologist, hence the visit to the park. While driving, I casually started a certain cassette tape that was lying in ambush in the car stereo system: Differences, for five instruments and magnetic tape, by contemporary composer Luciano Berio. She became increasingly uncomfortable, and asked me to “stop this noise!” I pretended to try, and said, “I can’t, I don’t know what’s wrong, but I can’t stop the music.” Her discomfort was turning into distress. Suddenly she let out a scream, fumbled around the stereo until she managed to eject the cassette, and threw it out of the window, in the midst of the national park—she, the hard-core ecologist.

As I had pushed myself to delve into the history of classical, and then formal music all the way to contemporary composers, I did speak this rarefied and ugly language, but did not like it. That is because learning a language, let’s say, Japanese, doesn’t necessarily imply that one likes anything he reads in it only because he can understand. But did understanding matter at all? According to American composer Milton Babbitt, it did not, as he substantiated in his article Who cares if you listen? Its ending reads: “Admittedly, if this [advanced, rarefied] music is not supported, the whistling repertory of the man in the street will be little affected, the concert-going activity of the conspicuous consumer of musical culture will be little disturbed. But music will cease to evolve, and, in that important sense, will cease to live.”

But people, whether or not for whistling purposes, needed music. So we owe not only to the Second Vienna School but to all the composers who took music to a rarefied realm of near-unintelligibility the coming into being of new forms of popular music. From ragtime to Dixie, and all the developments that jazz underwent all the way to the free jazz of the 1960s; from Elvis Presley and the Beatles to King Crimson and David Bowie to the Talking Heads and Nirvana along with all sorts of new genres and subgenres well into the 1990s; from the Great American Songbook of, among others, Cole Porter and Rodgers and Hart to the German (Berlin in the 1920s), Cuban (Havana from the 1920s through the 1950s), and Brazilian (Rio de Jainero in the 1950s and 1960s) songbooks, people in the western world repossessed themselves of music, and music paid their loyalty back with dividends, by producing the most musical century in the history of western civilization.

It was in L.A. that Schoenberg had continued his music-cide—only to contradict himself gloriously, for which I give him credit, when around 1940 he told his advanced composition class at UCLA: “There is still plenty of good music to be written in C major.” But it was too late, the damage had been done. Not only by him, of course; more by the idea that music was all about experimenting something new, to the point that, within a few decades, everything had been tried. It was more about ideas, by then, than about what our ears would hear.

Jazz too had imploded. Free jazz, at least to my ears, had never sounded as abstract and abstruse as contemporary formal music, but it too had devolved into inaccessibility. Back in Milan, I used to have a frind buy saxophonist Anthony Braxton’s albums from his most radical and experimental period just to see the former’s facial expression when he listened to them. His reactions were terrific fun; the music, not so much.

Rock music too had taken an unexpected path. Born as the music of the people based on three chords and with no cultural pretensions whatsoever, within two decades at least some of it had betrayed its roots and become brainy, either by fusing with jazz, or by morphing into “progressive rock” and then by taking it to its most extreme.

It had taken centuries for classical music to become tonal, which it subsequently remained for about three centuries, then less than a century to become so abstract as to be abstruse; less than a century for jazz to go from Louis Armstrong to Anthony Braxton, and others, and their own brand of abstruse inaccessibility; and, incredibly, less than two decades for rock to go from Elvis Presley to what the band Yes had become after their fifth album. It had come to the point in which the three western traditions had, in essence, imploded, unable to produce participable music any longer. It’s a very western thing, to arrive at something, and then to proceed to take it apart in search of something better, newer, or both. The western music telos seems to have marched toward entropy, despite what Schoenberg believed about his highly controlling and structured approach.