Humor in the Midst of Strife 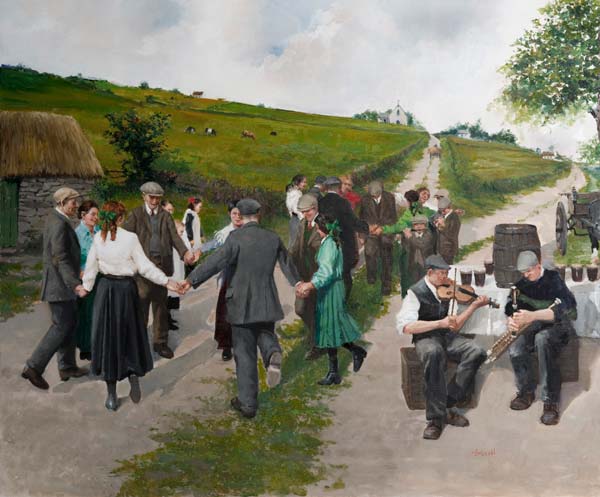 In 1979, Alan Shatter, then twenty-eight years old, was elected to the Dublin City Council as a Fine Gael (“Tribe of the Irish”) candidate. Shatter was the only member of Ireland’s Jewish community, numbering about 2,100 at the time, to have ever sought electoral office as a candidate for the party, which had long been shunned by many Irish Jews. In the 1930s Fine Gael had been briefly led by the pro-fascist General Eoin O’Duffy. It was later joined by Oliver Flanagan, who in 1943 had asserted that Ireland needed to rout the Jews out of the country just as Germany had done. 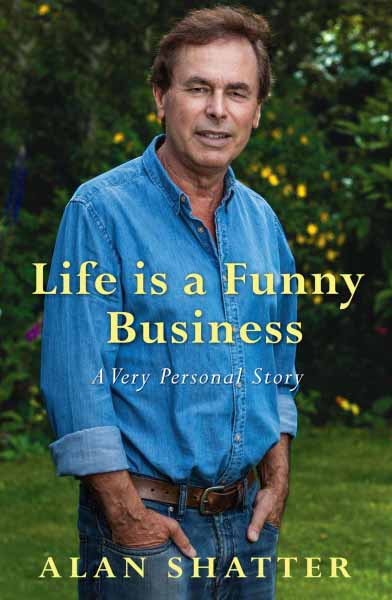 Nonetheless, Shatter’s admiration for Fine Gael’s leader in the 1977-1981 period led him to join the party and to begin a lengthy political career that ended only in 2016. Within two years, Shatter, at age thirty, was elected to the lower house of the Oireachtas, Ireland’s parliament. Serving for over twenty-five years as both a solicitor (Shatter is also the author of the influential treatise Family Law in the Republic of Ireland) and a Fine Gael parliament member, he eventually became the first person in Irish history to act as both Minister for Justice and Equality and as Minister for Defence.

In 2014, however, Shatter was pressured to resign from the Oireachtas, departing under what he terms “a cloud of false allegations” in relation to his ministerial actions (xii). Though subsequently cleared by a number of investigations and inquiries, he lost his 2016 bid for re-election and (having stopped practicing law in 2011) suddenly found himself unemployed and with nothing to do for the first time in his adult life. His decision to write Life is a Funny Business arose from that recent crisis. “I felt a need to look back to my early years to try and gain some understanding of the journey I had first embarked upon that led to my arriving in the place in which I now found myself,” he explains (xiv). As part of this cathartic recounting, Shatter usefully clarifies some features of Irish society from the 1950s through the 1970s and offers insight into how his Jewish background has influenced him.

“For those currently experiencing one or more of life’s lows, or for those who simply enjoy a laugh, I hope parts of my story make you smile at life’s unpredictability, peculiarities and idiosyncrasies,” he writes in the introduction (xv). While much in Life is a Funny Business is indeed humorous, Shatter’s youth was marred by tragedy. Sometime after his tenth birthday, his mother began developing health problems: “From being a loving, happy, soft-spoken, tactile parent she became distracted, irritable and distant” (36). Returning home one winter afternoon, at age fourteen, Shatter found his forty-year-old mother immobile on the kitchen floor. She had taken her own life.

Shatter and his father found the shiva experience—Judaism’s traditional week-long mourning period—that followed “horrendous,” rather than a source of some comfort or support. “It was during that week that I became a secular Irish Jew,” Shatter writes. “To some this description may be contradictory. To me, it is an honest description of who I am. Over the years, I have learnt that being not only Irish but also Jewish is part of who I am and how I view the world” (72). (The book, in fact, has a five-page glossary of Hebrew words.)

When his father passed away unexpectedly in 1974, at fifty-eight, Shatter, in accordance with the instructions his father had given him years earlier, did not sit shiva. Ireland’s young chief rabbi was unable to persuade him to act otherwise. “I know that my decision not to sit shiva caused much consternation within the Jewish community at that time,” Shatter recollects, “but, looking back on it now, I have no regrets” (173). In contrast, he mentions later crying as his son recited his bar mitzvah portion in Dublin’s Adelaide Road Synagogue and also crying during his daughter’s bat mitzvah celebration: “My skepticism toward religion I have learnt doesn’t inhibit my emotional reaction to some aspects of Jewish ritual” (48).

Following the Six Day War, Shatter became determined to visit Israel and arranged to spend two months in kibbutz Ma’anit. He tells of his first time seeing the Western Wall in Jerusalem: “For someone who regards himself as a secular Jew, I was surprised by the depth of the emotion I felt just being there, a feeling that has been replicated on every occasion I have returned. My emotional reaction is always a surprise as still to this day it is being in the precinct of the historical Wall that elicits my response. For me, prayer still has no meaningful role” (103). Although it was suggested to him in 1968 that he stay or settle in Israel, Shatter felt he needed to go back to Dublin: “It is a country with which I feel a close bond and in which I have a deep interest but Ireland has always felt like home” (105). He has returned often to Israel, though, including as a cabinet minister, during which he discussed complex political issues with Israelis and Palestinians. He now sees “little cause for optimism that any substantive progress in achieving a permanent end to the conflict” between the two “will be achieved any time soon” (107).

Article 44 of the Constitution of Ireland that was adopted by referendum in 1937 granted the Catholic Church special status while also—at a time when many other countries were sinking in antisemitic mire—unambiguously recognizing its Jewish community:

The State recognises the special position of the Holy Catholic Apostolic and Roman Church as the guardian of the Faith professed by the great majority of the citizens.

Shatter relates how in the early 1970s the Catholic Church’s special position in Article 44 became a source of debate and discussion in Ireland, accompanied by proposals that this and the references to other religious groups be removed from the Constitution. The Jewish community of Ireland had been appreciative of the constitutional recognition it received in the 1930s and the Jewish Representative Council of Ireland had no plans to involve itself in the 1970s debate about religion in the Constitution. In 1972, however, the Dublin Jewish Students Union (DJSU), whose report on the matter Shatter drafted, “recommended the deletion of express constitutional reference to both the Catholic Church’s ‘special position’ and to other religious faiths,” and argued against “the ban on divorce and the sale of contraceptives” (150).

Shatter delivered copies of the DJSU report to Ireland’s major newspapers, generating enormous headlines, with the media presenting the students’ position as being that of the Jewish community as a whole. The DJSU’s actions understandably angered both the chief rabbi and members of the Jewish Representative Council of Ireland, but the controversy was short-lived. Later that year, in December 1972, the Fifth Amendment to the Constitution was approved and the above-quoted subsections of Article 44 mentioning the Catholic Church and the Jewish congregations were deleted.

One of the most fascinating chapters in Shatter’s memoir involves his extended efforts on behalf of Soviet Jewry, including with the Irish Soviet Jewry Committee, which he helped form in 1971. In 1985 he flew to Moscow to meet with Jewish refuseniks demanding religious freedom and the right to leave the Soviet Union for Israel. On his fourth day in the capital he met with Boris Begun, who was on a hunger strike to protest the seven-year prison sentence given to his refusenik father, Yosef Begun, for “anti-Soviet activities” (i.e., teaching Hebrew and Jewish culture). In an effort to persuade the religiously observant Boris to end his already one-month long hunger strike, the secular Shatter “referenced rabbinical authorities asserting suicide to be contrary to Jewish law and values” (163). Though Shatter’s argument was unconvincing, a phone call to Boris from one of Israel’s two chief rabbis eventually led him to call off the hunger strike.

As a newly elected parliamentarian in 1981, Shatter quickly discovered that he “was simply expected to vote with the government” and “that no value of any nature was attached to” his prior legal expertize or to his knowledge of Irish family law (258-259). Early on, Shatter met fellow Fine Gael politician Oliver Flanagan, who in the 1940s had sought to expel Ireland’s Jews. Shatter avoided discussing with Oliver Flanagan anything related to Irish Jews, Judaism, or Israel, and over the years the two found little to agree on politically. In 1987, however, Oliver Flanagan retired and was replaced by his son, Charlie Flanagan. Shatter and the younger Flanagan not only became good friends, but in 2011 Charlie Flanagan even took over chairing the Ireland/Israel Parliamentary Friendship Group, which Shatter had founded.

Shatter has lately come to doubt the value of the “frenetic multitasking” that characterized much of his life (xiv). His wife, Carol, comes across as a generous and patient spouse who has also been a partner in her husband’s activism, legal efforts, and political pursuits. They married while still students at Trinity College, with Shatter then twenty-two and Carol not yet twenty. Here is Shatter’s recollection of his wedding speech: “The wedding guests were subjected to a narration on the need for law reform, the plight of Soviet Jewry and quotes from Alexander Solzhenitsyn, one of my favourite authors. Towards the end of my speech I managed to mention our mutual parents and concluded thanking those present for their generous wedding gifts. Relieved the speech was over I then sat down. Five minutes later, to my horror, I realised I hadn’t once mentioned Carol” (169). She was apparently able to laugh off this egregious oversight, however. After all, life is a funny business.

Shatter’s belief that “there can be “humour in the midst of strife” (262) resonates throughout Life is a Funny Business, even as his personal story details a number of very sad life experiences. The abrupt conclusion of the book leaves the impression that this is but his first autobiographical installment. I’m told that Shatter has already completed a sequel, which will be published following some pending legal decisions. It will no doubt offer further insight into Irish politics and Shatter’s Jewish identity.