In This House of Rye. Rumer Godden at Lamb House.

We have just returned from a holiday in Sussex, staying near the ancient town of Rye.
Rye is very proud of the number of writers and authors that live or lived in Rye or nearby. One, who is still writing, is Jack Ryan the creator of Captain Pugwash whose latest adventure takes place in the town of “Sinkport.” Others are Russel Thorndyke who wrote about Dr Syn the clergyman smuggler and the Aiken family.

The most famous of the writers is Henry James who lived in Lamb House until his death in 1916. After that it was rented to tenants, which continues to be the practice now that the property is in the care of the National Trust. The tenant has to be a literary minded gardener who will keep the house in suitable condition ready for visitors two afternoons a week in season. One tenant was EF Benson who wrote (Among 60 others) the Mapp and Lucia books. And Rumer Godden who lived there for 7 years, and elsewhere in Rye thereafter.

Rumer Godden is still well regarded in Rye by people who knew her. One of the custodians at Lamb House told me of her two Pekinese dogs; the owner of the bookshop in the High Street spoke of her attendance at the Rye Festival when she was 89 (and living near one of her daughters in Scotland) to give a talk on her work and life.

I like Rumer Godden’s work. I knew that she was familiar with Rye because she set one of her children’s books A Kindle of Kittens there. That is about a mother cat’s effort to select the most suitable people in the town to have custody of her kittens. And although the prototype abbey for the book In This House of Brede is Stanbrook Abbey in Worcester, the fictional abbey is placed in the town of Brede about 5 miles away with descriptions of the Marsh and surrounding country. But the description of Brede owes more to Rye than the real Brede. 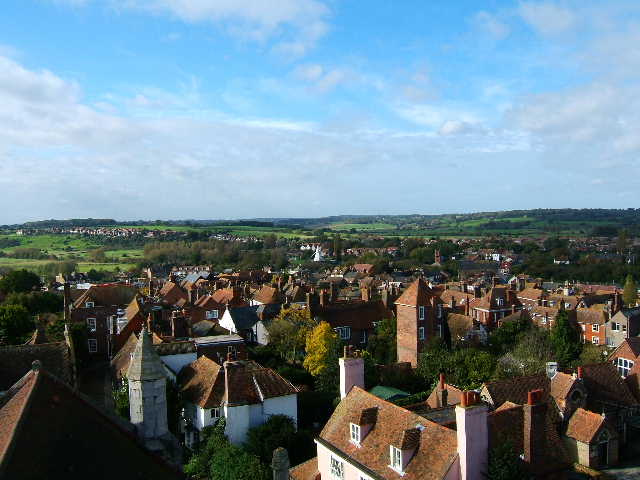 From the air it would seem that it was the abbey that had space, the old town below that was enclosed; steep and narrow streets ran between the ancient battlements and its houses were huddled, roof below roof, windows and eaves jutting so that they almost touched, garden yards overlooked by other garden yards… 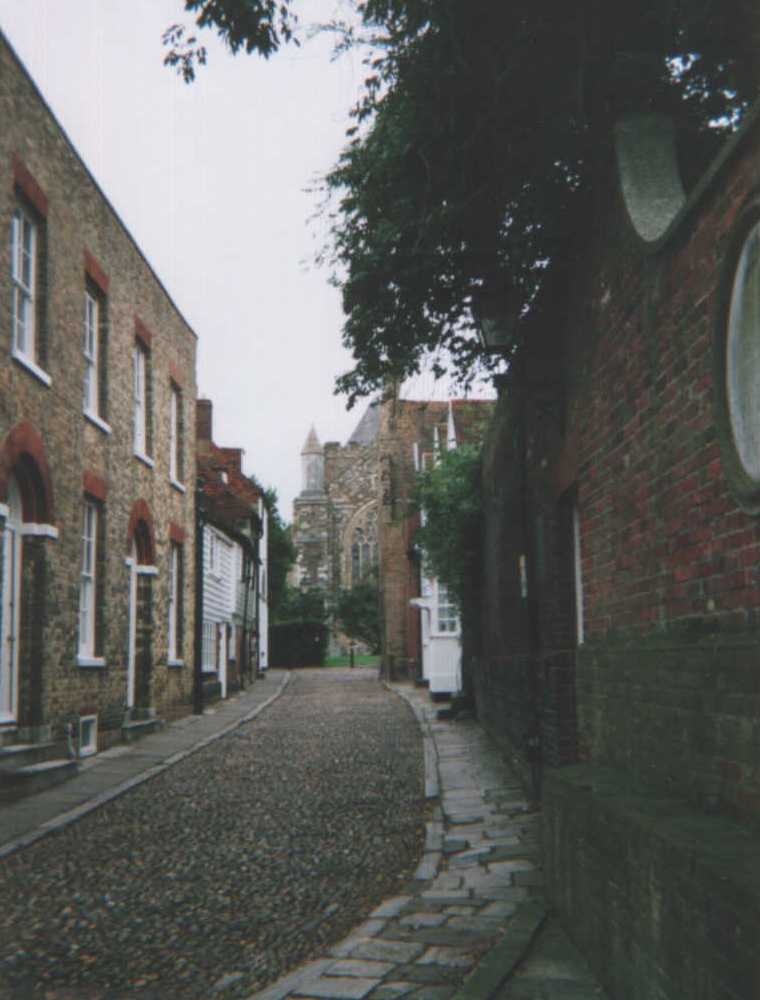 This is the view from the front sitting room of Lamb House looking towards the churchyard.

The main story of In This House of Brede is that of Philippa Talbot a senior civil servant who, at the age of 42 finds a vocation as a Benedictine contemplative nun. A journey that began with a chance encounter in Westminster Cathedral. According to the National Trust Custodian much of the book was written in Lamb House. As I walked into the small but beautiful garden I was startled at how much I recognised from the descriptions of the abbey garden. 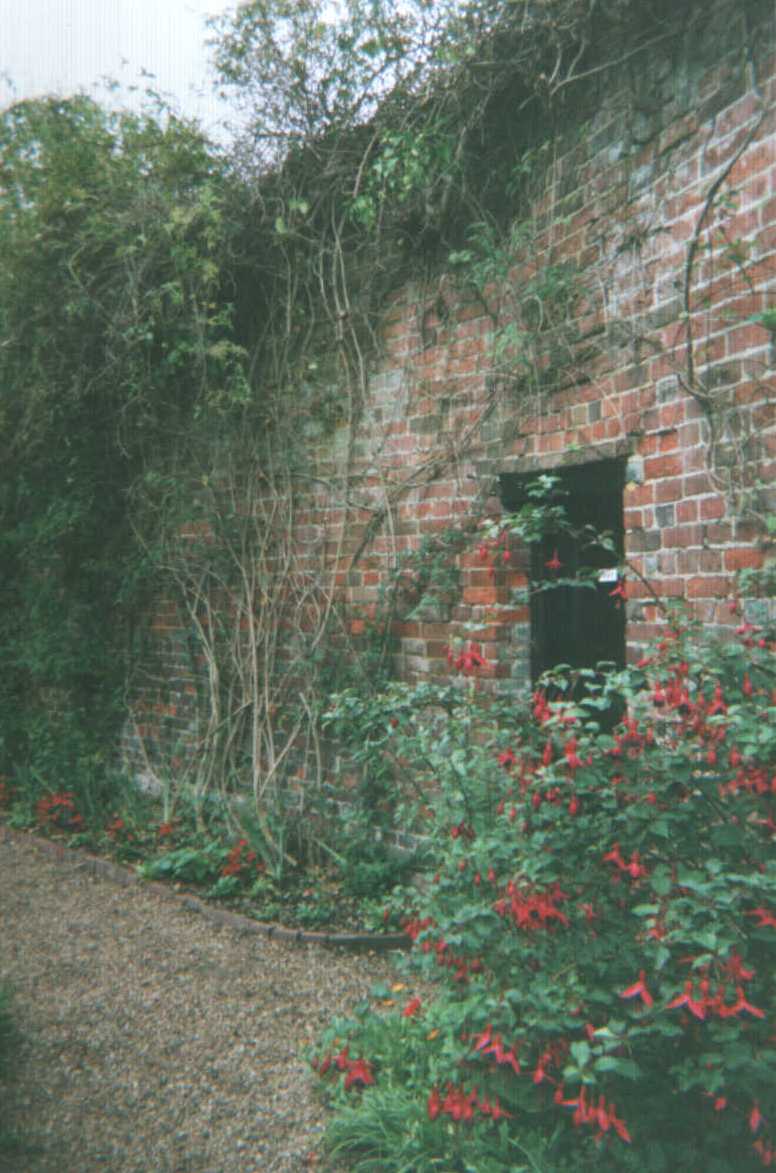 She turned into the “pleached alley” that bordered the lawns, pleached because of the thickened interlacing of the old espaliered peach trees . . . the branches broke into timid blossom in spring but the park was too cold for them and the peaches were hard and green. 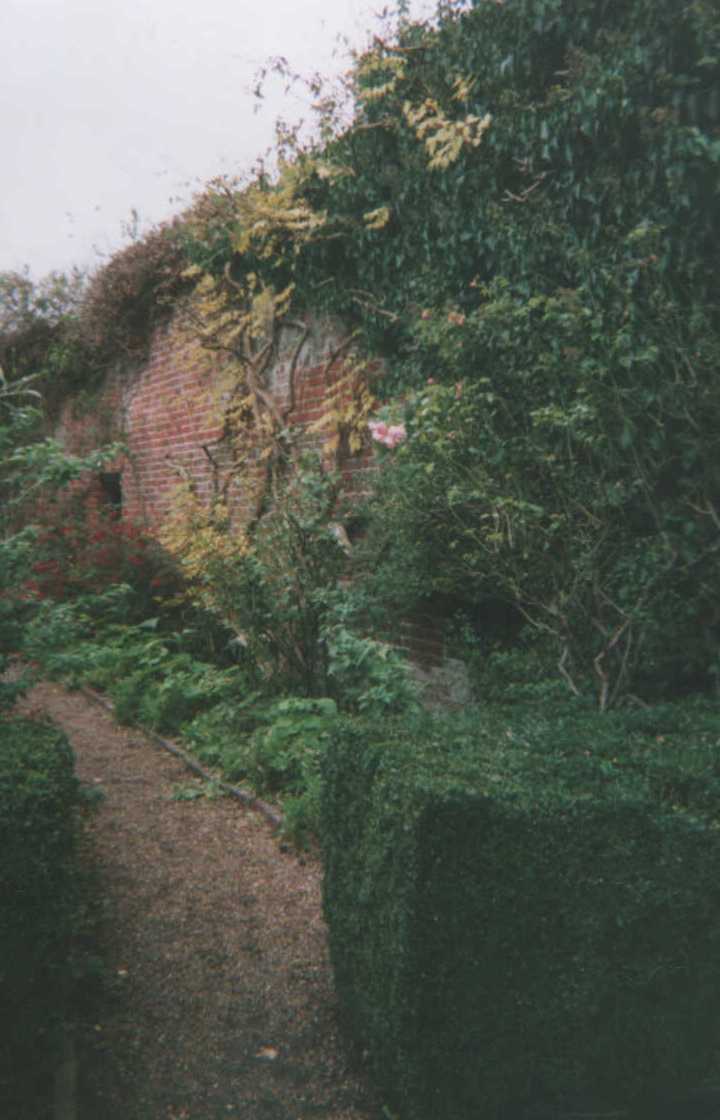 In the garden the hedges were no longer clipped as tidily as they had once been – “Yew not box” Cecily Scallon said regretfully when she came, she had always thought her…monastery would have box hedges.

Dame Mildred was often to be found, gumboots on her feet, an old panama or felt hat perched on top of her veil, gathering a collection of hornbeam twigs, sticky buds or catkins or budding rowan to bring indoors. “I have been making my prayer,” she would say. “I don’t know what the theorists would make of it and I don’t care; just look at the pattern of that tree against the sky.”  . 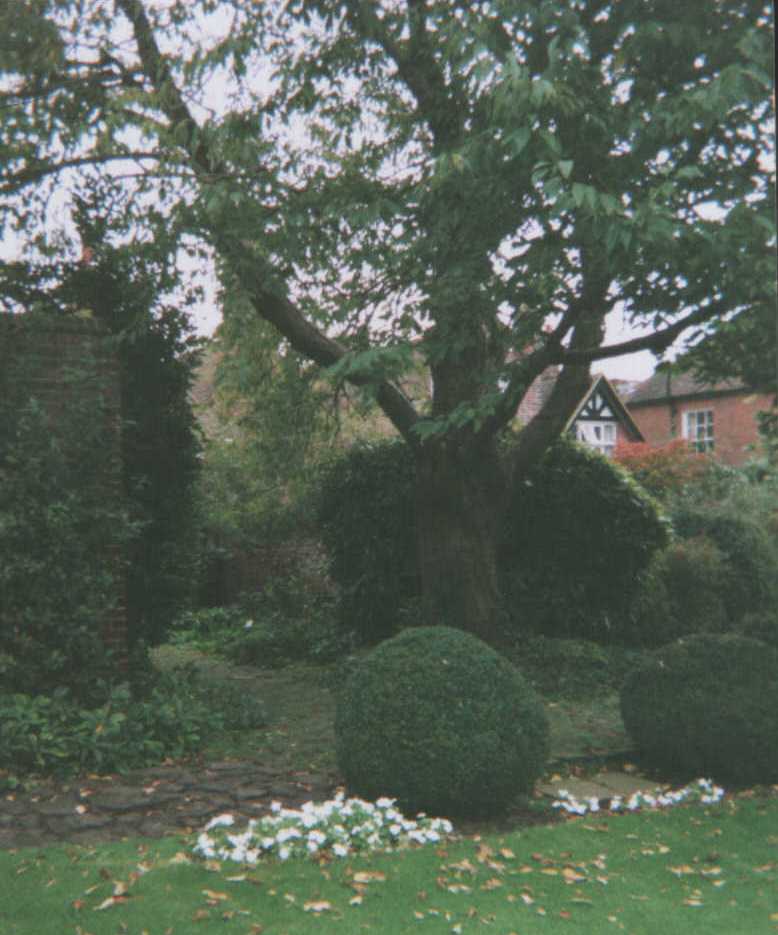 I appreciate that clipped hedges, prim gravel paths, box and yew are to be found in many gardens of this type. But when a writer describes two characters working together to make a brick path, and at the time she was living in a house with a herringbone pattern brick path I think I can be forgiven for making a connection.

The parish church of Rye is St Mary the Virgin. The tower is open to the public and these photographs were

taken from the top. 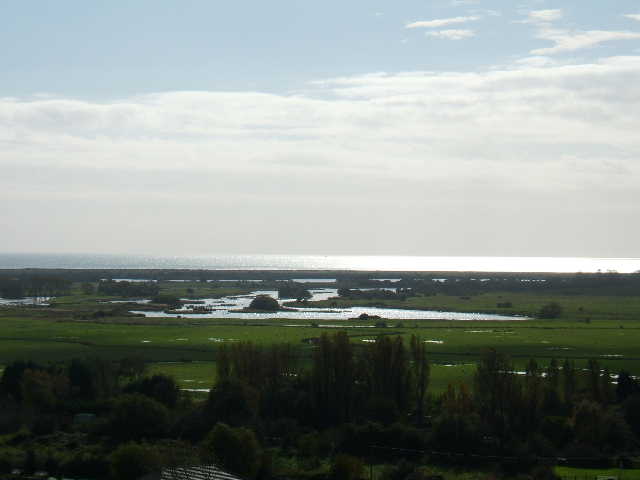 The stair came out on to a flat roof that had a parapet on which tall Philippa could rest her arms and look far out, over the marshes and the river winding through them, to the faint far line of silver that was the sea. I shall never see the sea again. That thought always came to her here on the tower. “I shall never see the sea.” 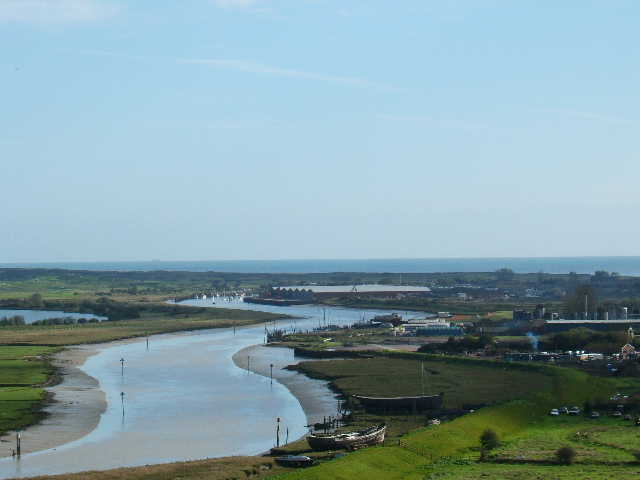 The life of a great monastery flowed as steadily as a river, no matter what rocks and cross currents there were; Philippa often thought of the River Rother that wound through the marshes of Kent and Sussex, oldest Christendom in England, watering the meadows whose grass fed the famous sheep, then winding below the town to the estuary that flowed to the sea.

Three rivers, the Rother, the Brede and the Tillingham meet around Rye, the largest of these is the Rother which meets the sea at Rye Harbour about a mile away.

After climbing the tower of Rye Parish church the best thing to do next is to take tea in Simon the Pieman, the oldest (1920) and in my opinion the best (among stiff competition) tea room in Rye. 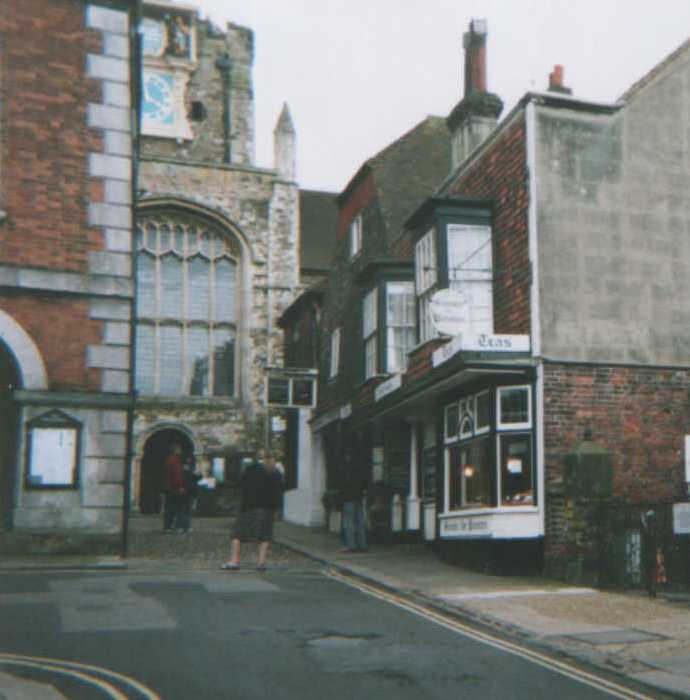 Rumer Godden kept Pekinese dogs but from the way she writes about them she must have had a fondness for cats too.

The monastery had its cats; there was Grock with his one green eye . . . the little she-cat Wimple, a Benedictine in her black and white, the white running under her chin, which explained her name. There was also the extern Bonnie, short for Boniface, who never grew much bigger than a kitten and who, Sister Renata swore, would catch butterflies but with a mouth so soft that when he brought them to her he would open his mouth to let them go and they would fly away.

This gentleman (I am told his name is Gingko) lives nearby in West Street but likes to greet the visitors to Lamb House as they arrive. 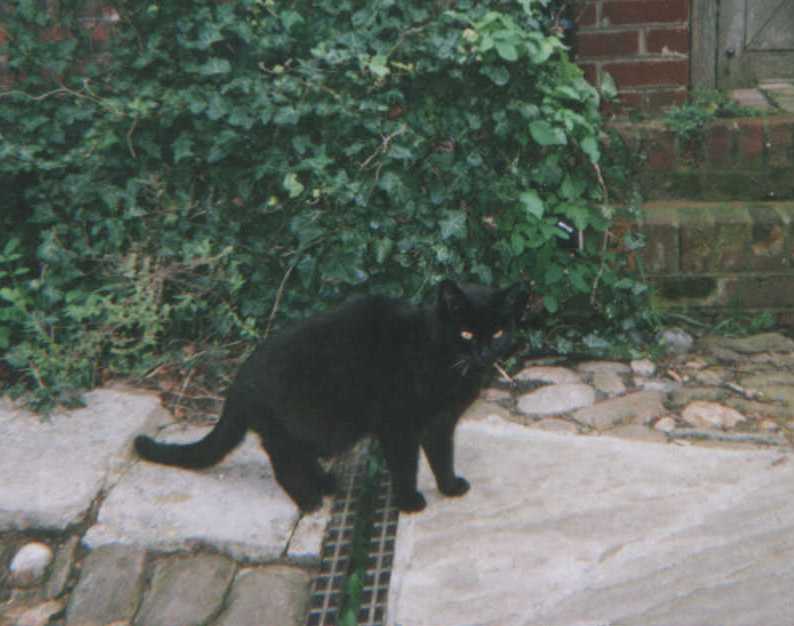 In This House of Brede published by Pan Books from the 1991 edition with preface.

A Benedictine Tapestry by Dame Felicitas Corrigan of Stanbrook Abbey published by Darton Longman and Todd 1991.

The National Trust and Lamb House