Julian of Norwich – An English Mystic

This was originally published here in March 2006.

As you may recall I make regular visits to Norwich, county town of Norfolk and that one of the things I like to do there is to pay a visit to St Julian’s church where the mediaeval theologian, mystic and writer Dame Julian lived.

Not much is known for certain of the life of this remarkable woman, who was the first woman to write a book in English. What is certain is that in May 1373, when she was 30 and a half years old, she suffered an illness of such severity that she was expected to die. As her priest lifted the cross above her bed her pain left her and she received her “shewings”, visions of Christ’s passion overlaid with other images and the nature of Christ’s love.

She recovered and wrote a short account of these visions. At some point she became an anchoress at St Julian’s Church in Norwich and it is believed that is where she meditated for 20 years before writing the longer account which is her book Revelations of Divine Love.

The anchorite was anchored to the spot in a cell which they did not leave. The service of installation into the cell is probably what gave rise to the numerous ghostly legends of nuns walled up alive as punishment for some transgression. The reality was different and the anchorite was a source within the community of prayer and wise advice. They did not retreat from the world, but were anchored within it. Julian was visited by, among others, Margery Kemp of Kings Lynn who gives us the best eye witness account of her wisdom.

She must have been born in 1342, but even her real name is unknown. She may well have adopted the name Julian from the church where she lived. For many years it was assumed that she would have been a nun of nearby Carrow Abbey and must have been educated, and hence came from a “good” family. Current thinking, based on insights in her book, is that she was never a nun but was a widow whose husband and child died in the various outbreaks of plague that followed the Black Death of 1348. Her description of the Holy Spirit rising up in the form of a young child skipping ahead is particularly poignant, as are her comments on motherhood.

A kind loving mother, who knows and understands the needs of her child, looks after it tenderly as is her way and nature. And as it grows bigger she changes her ways but not her love. And when it grows older still, she allows it to be punished, to break it from vice and lead it to goodness and grace. And our Lord does the same thing, truly and well, to those he brings up.

She may have learned to read and write especially to write down her shewings but there is no particular reason to assume that she had (like Margery Kemp) to dictate to a scribe and she could well have had access to an English bible. She was still alive in 1416 when a bequest was made to her in a will. Later references are probably about her successor in the anchorhold.

She was not formally canonised but is respected in both Anglican and Roman Catholic churches and her day is celebrated on 8 May each year.

Her book is accessible to the modern reader with a good translation from the Middle English. Some are better than others but several are available. In my opinion her strength is her optimism and faith in God’s goodness during what were horrendous times of death, plague, starvation, war and grief. The most famous quotation from her book is often translated as “everything will be alright” which can sound trite and trivial. In the original, read in the light of her history in a city where half the population died of plague and so few priests were left alive to perform funerals that the dead lay stacked in the street, it retains a power that cannot fail to impress.

I have found her thoughts, and her insights into God’s love, very helpful in my life, both personal events and wider world issues. She was a contemporary of Chaucer and the liveliness of some of his poems can lead us to underestimate the horror they would have both lived through. Merrie England was not always so merry.

The shrine was destroyed in the dissolution and the church badly damaged by bombing in 1942. The foundations of the cell were uncovered so that was rebuilt when the main body was repaired. It is a modest building within the Anglican parish of St John the Baptist Timberhill, with a quiet atmosphere of peace. It is off King Street and 10 minutes walk in their respective directions from the BR station, the covered market and the cathedral.

Next to the church is the Julian centre where books can be borrowed and bought. Nearby the Sisters of the Community of All Hallows provide retreats and accommodation. In the US the Order of Julian of Norwich in Wisconsin are a contemplative Order of the Episcopal Church.

I highly recommend a visit if you are in the area. Indeed all Norwich is worth repeated visits. Dozens of mediaeval churches, the castle, Cathedrals, covered market and shops and the Forum. Containing the library, BBC Norfolk and the 2nd Air Division Memorial Library, the USAF in East Anglia during WWII.

And I had no other answer from our Lord in these shewings except this: ‘What is impossible for you is not impossible for me. I shall keep my word in all things, and I shall make all things well.’

In search of Julian of Norwich by Sheila Upjohn 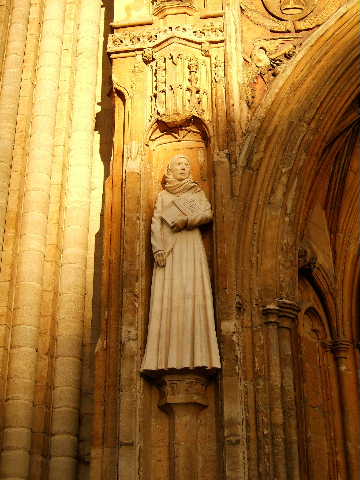 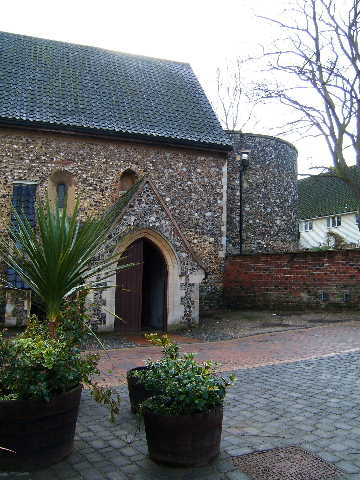 Left, a 20th century statue of Dame Julian on the front of Norwich Cathedral. Right, St Julian’s Church. Note the shortened round tower.

To help New English Review continue to publish articles such as this one, please click here.

PrevDignity or Sati? Death as a Lifestyle Choice
Linda Nochlin and The Imaginary OrientNext