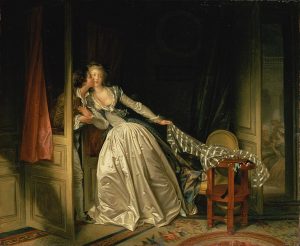 He dictated his letter in the most official manner, his features betraying no emotion or thought, the physiognomy I usually read as a book, having worked for ten years in that nook of a private company run by an invisible boss, who was involved in numerous charities all over the world. My hands faltered at the title “Kiss Me”; my eyes dilated at what the heading provoked in a mind used to the most boring and bland letters a secretary ever typed or wrote.

“Kiss me real slow. Kiss me without the coitus of tongues that movies extoll,” he said in a very calm voice, devoid of any sensation a subject like that was bound to invoke.

I made as many typographical errors as a novice would, and stared at the screen incapable of looking at the voice. My mind became preoccupied with a pressing issue to resolve: should I stop typing and show offence by instantly leaving the room, or should I pretend that the whole thing was a banal as addressing a shipping company about some cargo? I felt his eyes scorching my face like the Summer sun on a Maltese coast.

“Kiss me as you would the petals of a fragile rose,” he intoned.

I decided to treat the dictation as any administrative matter and concentrated on correcting all the errors before he became aware of my turmoil.

“Kiss me as no one kissed before,” he continued, but now in a rapturous voice.

“How would a woman know about millions of kisses in which she was not involved,” I thought.

“Kiss me with those lips that utter no lies and loathe all types of falsehood,” he said with an overwhelming voice.

“Is he making fun of me?” I thought. Everyone knew I was incapable of telling a single lie and that won me the epithet lie-not-to-me. I was sure my cheeks were as red as my bed sheet when soiled by an early period that fatigue brought. His eyes continued scalding my face with their rays of excessive warmth. I slowly rose and poured a glass of water from the table opposite. It took me a long time to empty the glass down my throat. When I turned to face my computer, I realized that he had departed without a single word. I waited the whole afternoon for further instructions but he avoided my room. I saw him through the glass conducting his job in the most efficient manner for which he was known. He was one of the politest people I ever knew. I placed the typed letter among other documents to be signed on his desk and left work feeling a fever in my bones. The next day life resumed its normal pace and I exercised my legendary self-control. No allusion was made to the letter or the message it bore. I pondered for nights on the intended recipient of his prose poem. When my birthday came a month later, for it was a tradition to exchange books on occasions like that, I found a collection of Leonard Cohen’s poems with the typed letter in an envelope that also included a birthday card, showing two children kissing like cherubim in William-Adolphe Bouguereau’s work. In the evening, I rang the bell of his house, which I had visited with other colleagues in a business form. He opened the door, his face beaming with a smile that only the Egyptian sun-god Ra could have shown. We have become kissing pals ever since – no sex, no engagement, no matrimonial plans – what people would call weirdoes.