One of the things springing up across England these last few years, as farmers diversify and less people go abroad on holiday, is the maze. Most of the new ones are maize mazes, grown for that year, cut afresh each year through the crop of maize, also known as corn in the US, sweet corn or corn on the cob in the UK.

Norfolk is no exception.

We went through a maze, this one old and permanent and made of hedge, one afternoon. Blundering up and down dead ends, unable to see where we were going, listening to other families, mostly laughing but some getting fraught on the other side of the hedge. Then you get to the middle and the quick way out. 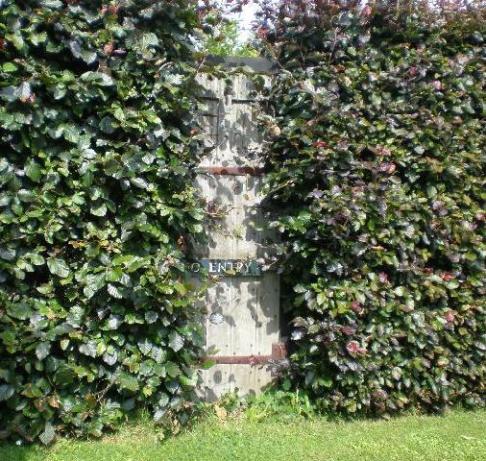 Norwich Cathedral has a new example of a much older form – the labyrinth. There are several ancient examples elsewhere in England. The one that springs to mind, which I have not visited myself, is in Saffron Walden. The pattern of a labyrinth, or as it is also called the ring maze, is often found cut on boulders or standing stones so they have had significance for a very long time.

The word comes from the ancient legendary palace of Knossos in Crete, the one said to have had the Minotaur at its heart. In reality that was a huge warren of rooms, corridors and chambers which got its name from the labyris, an axe which was the symbol of matriarchal authority, which decorated the walls.

The one in the cloister of Norwich Cathedral was placed to commemorate the Queens Golden Jubilee in 2002. I usually walk it whenever I visit the cathedral.

I remember as a child being shown a rather dire picture, of the sort once favoured in Sunday school, the purpose of which was to contrast and compare the straight and narrow with “the primrose path of dalliance”. On one side of the picture stern faced people climbed a steep path, between rocks and hard places. To the left a stream meandered through a grassy meadow, strewn with pretty yellow flowers (the primroses I presume) and cheerful looking people. I was supposed to aspire to the grim greyness on the right. While I could see the desirability of a sense of duty, faithfulness and reliability I couldn’t quite see why God’s beautiful works of flowers, grass and a stream should be presented so negatively. I think it was one of the reasons I refused to attend Sunday School.

This picture sprang to mind as I walked the labyrinth last month. It is outlined by stones set in grass. The information board speaks of the Christian idea (although it is older) of a spiritual journey which, with all its twists and turns, speaks of the journey of our days as the pilgrim walks the way of the world.

You start out choosing to take that path. You could just stride directly to the middle. Nothing forces you on the route except your own desire to follow it. The path is worn by the footsteps of others so you have their experience to guide you as you add your own experience.

And every twist and turn shows you something different of the life going on around you. This way there is a black cloud above the close. Turn in the opposite direction and there is sunshine poking through from behind the tower.

You see the monuments to Norfolk people of the past. Some old, like that to John Goodwin of 1679, others 20th century, and the gravestone of the splendidly named John and Margaret Sheepshanks, Bishop and wife 1893 – 1910.

Just as you think you are going away from the centre the path loops back and you are moving towards it again. Towards the north west corner you hear the organ; either the organist is practising or it is a lunchtime recital. Children scamper across and a party of French students make their way towards the refectory.

At the south east you can hear workmen repairing the arch of what is called the dark entry, just beyond where Meiluami the Elephant stood. They are using the traditional skills of carpenter and mason, plus the modern essential of the electric kettle and the box of pyramid bags with the little perforations.

In the maze I was shut off and mazed. My dictionary defines “mazed” as a dialect word for amaze but I had a friend from rural Essex who used it in the sense of bewildered and confused (c.f. mazy) which is the sensation I got in the maze.

In the labyrinth I was always part of the life of the cloister, walking my path as other about me walked theirs. 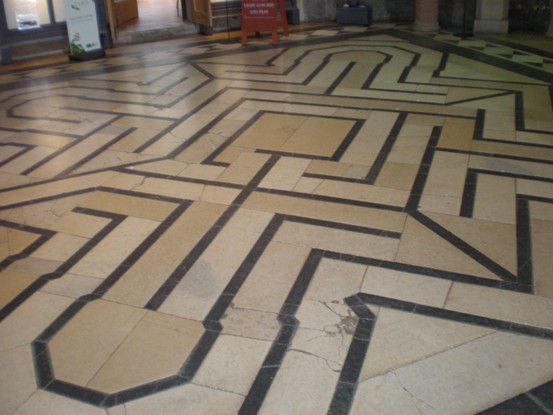 Picture above, just by way of something different. This tile pattern under the West Tower of Ely Cathedral was designed by Gilbert Scott; and few people who walk over it as they enter even realise that it is a labyrinth.

To help New English Review continue to publish entertaining and instructive articles such as this one, please click here.

PrevThe Allegory Of The Farm
Sharia in Britain: a Failure of JudgementNext