Land of Milk and Honey: A Book Review About a Vanishing Way of Life 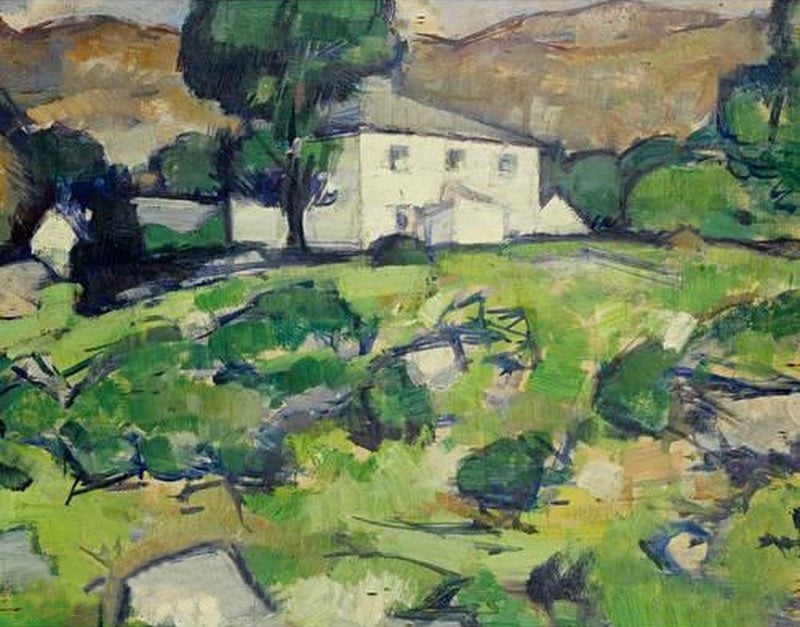 This is an extended version of an article recently published in The Jackdaw, No 165.

The plight of farmers, and of agriculture generally, in the increasingly Disunited Kingdom, is becoming dire. The difficulties facing anyone with landholdings, trying to make a decent fist of things these days, increase by the week: they now threaten the very survival of farms run by many honourable people trying to work and look after the land, and the government does not seem to grasp the urgency of dealing with them at all.

In 2019 I had the pleasure of reviewing Jamie Blackett’s wonderful Red Rag to a Bull: Rural Life in an Urban Age, also published by Quiller (2018). That book ended on an unrealistically optimistic note that was soon to be dashed, for Blackett found himself in danger of losing what remained of his family lands that lie in Ardbigland, South-West Scotland, that enchanting peninsula, in what is now called Dumfries & Galloway, commanding glorious views over the Solway Firth towards the Cumbrian coast in England. His lyrical descriptions of his demesne are delightful, and his love of the place shines on almost every page. The threats were many, not only from extremists who attack the very idea of breeding beef-cattle, but from repercussions after Brexit (the departure of the United Kingdom from the European Union) and an uncertain climate in a time when resurgent Scottish nationalism (aided and abetted by myopic Little Englanders, who now run the so-called ‘Conservative’ Party, and care not a fig for anything beyond their own suburban grasp of things), heralds a possible break-up of the United Kingdom.

This new book is a sequel, a forthright account of how he and his family coped with the crisis by adopting regenerative agriculture and transforming his business into pasture-based dairy-farming.

It should be remembered that visually agreeable countrysides, with hedgerows, copses, fields, farm-buildings, etc., are the results of centuries of interventions by humankind, creations that embrace æsthetics, architecture, and all sorts of artefacts that derive from conscious design decisions, such as fencing, gates, stiles, dry-stone walls, and so on. They are of far greater artistic worth than many a hideous piece of Conceptualism favoured by the money-guzzling Art Establishment, intent on sundering any appreciation of Art from the understanding of normal human beings. Such marvellous national assets are increasingly under threat, not least from politicians taking their cues from fanatical agitators who know nothing about the countryside or the people who live and work in it. Blackett’s adversaries include Scottish nationalists and their allies, the Greens (known in Scotland as GRINOs [Green In Name Only]), who have been compared elsewhere to water-melons: green on the outside but red within, among their many aims is to ban hunting altogether. Worse, the ‘steady drip of nationalist Anglophobia in the media’ poisons communities, dividing them, and reminding Blackett of the situation he had seen in Northern Ireland, where local people ‘kept their heads down, intimidated by nationalists.’ The ‘Faux Romance’ of Scottish nationalism is not sustained by a love of Scotland, but by a hatred of the English: if a Scot even sounds English, he or she is ‘othered,’ such is the cauldron of hatred being deliberately boiled up today. The Blair administration set up Holyrood without any of the checks and balances that would have prevented the corruption of power. Blackett, aware that the pro-Union vote was fragmented, attempted to form an alliance with those opposed to the Scot Nats, experimenting with tactical voting, but pigheadedness and fragmentation continued, with the result that the nationalists once more gained power.

As I have previously noted, I used to live in Rutland, one of the most pleasant of British counties, where some aspects of real, traditional, rural England could still be enjoyed in the early morning, as I set off on minor roads for Leicester (where I held a post in Academe, an environment soon to be poisoned by similar forces which were wrecking everything else). The Cottesmore Hunt foxhounds were out for their exercise, sterns waving proudly, then with one gesture the whipper-in made the whole pack move to one side and I could proceed on my way. That was just one of the many skills that used to be common in the countryside before self-righteous prigs, knowing nothing of rural life and its ways, imposed their ignorant prejudices on the rest of us. These new fascists do not know where milk comes from, or meat, or cheese, and have never seen what dear wee foxes can do in a rampage in a hen-coop. They hate animals grazing in fields, imagining that cow belches and farts are destroying the planet, but seeing nothing wrong with importing millions of avocados in jet-engined planes from distant parts, let alone insisting on cheap gas-guzzling flights so that they can sun their carcasses and behave badly in some horrible resort the construction and running of which gobbled up and still gobbles energy and resources.

Certain high-profile vegan presenters in the BBC (collectively called by countrymen the Campaign for Random Accusations against Pastoralists [CRAP]), whose main mission seems to be to drive livestock into oblivion, have intensified their activities, demonstrating visceral hatred for British farmers while promoting nice soya cultivation in destructively cleared Amazonian rainforests. Impervious to reason, they pour forth their bile: Blackett, like myself, has come across some choice specimens of bucranial stupidity who refuse to believe that leather is a by-product of the livestock industry. Like milk, those dolts assert, it comes from shops. As for meat, it will be grown in laboratories, we are told. So cow-shit, which fertilises the soil, and is host to a myriad of life-forms, will be replaced with chemicals, produced in energy-consuming factories, emitting much unpleasantness into the air. For far too many generations now, reliance has been placed on petrochemical fertilisers, whereas we need to return to using muck to increase organic matter in our soils. One cow deposits in its fæces enough food material per annum to support an insect population, mostly dipterous larvæ, equal to at least one fifth of its own weight. Blackett sees the vegans, the enemies of hunting and shooting, and the foes of those keeping livestock, as an Axis of Spite, a collection of ‘Neo-Roos’ (Neo-Rousseauists), spreaders of falsehoods, and destroyers. At the end of the Cold War Communism simply morphed into the Neo-Roos, their agenda identical to those of the German Revolutionaries at the end of the 1914-18 War, and included: corruption of impressionable youth; control of all means of publicity, information, news, etc.; division of the population into hostile, mutually antagonistic groups; destruction of faith in leaders and institutions; lip-service to ‘democracy’ while seizing power as ruthlessly and as rapidly as possible; promotion of government extravagance to destroy credit and create rampant inflation; encouragement of civil disorder on as many fronts as possible; nurture and utmost inflation of resentments and fears; and by specious argument aid assure the breakdown of old moral virtues. Now Neo-Roos are apparently trying to have those enemies of the red squirrel, the greys, classified as a ‘native species.’ Barmy.

In this beautifully written book, Blackett describes the frightening problems facing farmers today, trying to stay solvent despite the efforts of box-ticking politically-correct governmental bureaucracies to make life as difficult as possible, egged on by the class-envy of ill-educated politicians, especially those with narrow nationalistic pretensions, who have no idea of what real history or nationhood actually are. He wondered what Nelson would have made of 70-odd ‘environmental’ protesters outside the National Gallery in London, watched over by 72 bored policemen bussed in from Kent at our expense. What fascinated Blackett was the man controlling the film crew, who kept moving the cameras to make it appear the whole Square was full of protesters. It recalled to mind my own experience some years ago when I heard a ‘schoolteacher’ telling her charges that the chap on top of Railton’s column was Nelson Mandela. Blackett was also assaulted with falsehoods by one of the Trafalgar Square protesters, a woman clad head to foot in ocean-polluting, synthetic fibres: she announced that eating four beefburgers was the same as flying to New York and back again on a jumbo jet.

Believe that as well as the Mandela myth, and you get the ghastly, corrupted, unwholesome picture.

Blackett re-introduced a Hunt and a pack of hounds (not appreciated by those who erroneously imagine that only toffs go out on horseback, which is untrue, as any country-dweller knows). Keeping horses and hounds requires skills, and gives employment to many, not just those who look after, breed, and train the animals, but the vets, manufacturers and suppliers of medicines for animals, makers of  tack, and, in the end, those who dispose of the carcasses of dead stock. And sheep, too, not only provide excellent meat, but wool for cloth, the weaving of which is still one of Scotland’s greatest glories, for the quality, colours, and designs of the various first-rate tweeds cannot be bettered by anything else, especially the synthetic horrors habitually worn by Rentamob. Blackett also brought back pheasants to his woodlands. Again, pheasants (shot in flight and expertly retrieved by well-trained, gentle dogs), when well-hung in the right conditions, then drawn and plucked, and properly cooked, make a splendid feast, washed down with decent Claret rather than the Mob’s favoured chemical concoctions poured from plastic bottles (plastic, being notoriously unstable, therefore adversely affects what is in the container). The self-righteous do not approve of shoots, of course, preferring that fowl raised in the dark should be murdered out of sight at a rate of 160,000 per day in one huge abattoir with a conveyor-belt 4.2 kilometers long.

Blackett is a true countryman and patriot, more than aware of the need to husband resources and care for the ecology of a threatened environment. His Army, Etonian, and landowning backgrounds, of course, make him an endangered species himself, perceived as an enemy by contemporary manifestations of witch-hunters of all unpleasant kinds including politicians, tax-collectors, fox-, badger-, and bunny-huggers, all secure in their invincible ignorance. ‘How can we be sure when we plant a tree on grazing land in this country that we are not just causing a better tree to be cut down in the Amazon basin to replace the protein in our diets?’, he asks: ‘swapping bio-diverse primary rainforest for dark, birdless, conifer plantations on Scottish hillsides is a crap deal for the planet’. The new wave of conifer-planting in Scotland, encouraged by Nicola ‘we planted twenty-two million last year’ Sturgeon, has unhappy resonances, particularly the ‘clearances’ involved, as farmers reluctantly do the post-Brexit maths, sell up to the Forestry companies, start packing, and follow the steadily growing convoy heading south.

Now we have the ‘greenwash’ of airlines trading carbon credits with forestry companies: am I alone in being reminded of the historical purchase of Indulgences from the Church which led to fragmentation? What we have is a Counter-Enlightenment in which superstition and lies trump scientific rigour and common sense, and where class-hatred is promoted rather than conservation of the knowledge of how the earth can be cared for.

And one factor is consistently ignored, never discussed at international conferences polluted by hordes of environmental windbags: population-growth is now out of control, and is unsustainable.

It is a dreadful prospect.

Professor James Stevens Curl is the author of many books, including Making Dystopia: The Strange Rise and Survival of Architectural Barbarism (Oxford; Oxford University Press, 2018, ISBN 978—0-19-875369-8), which made him the target for trolls and the hatred of Vested Interests.