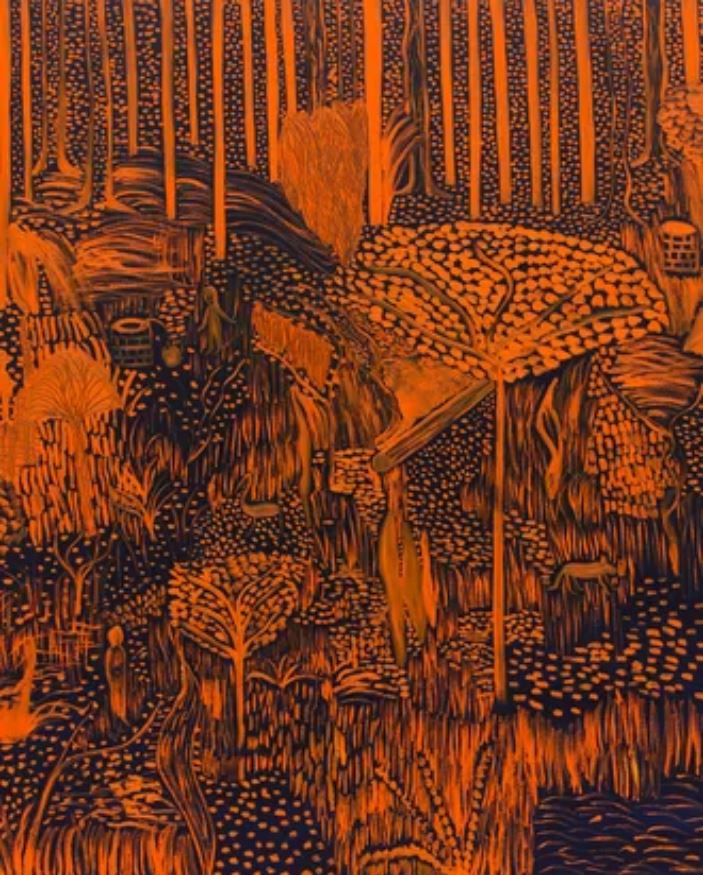 I cannot bring a world quite round,
Although I patch it as I can
_____—Wallace Stevens, “The Man with the Blue Guitar”

“Politics is downstream from culture,” Andrew Breitbart famously remarked. There is considerable truth to the epigram though, of course, it is a two-way street as politics doubles back to influence and reshape culture’s disparate components. Culture—the array of customs, institutions, rituals, cuisine, codes of conduct, gesture, idiom, dress, manners, imagined realities, behavior patterns and common expectations that characterizes a people—remains the dominant partner of the dyad. Indeed, one might say that politics is part of culture, a way in which culture expresses itself in the field of governance.

But culture does not emerge from nothing. Put simply, culture runs downstream from mind, that is, from an amalgam of emotion, memory, and cognition that defines human activity as it negotiates the complex environment, physical, social and psychological, in which it finds itself. The distinction between culture and mind is admittedly theoretical, but so is the distinction between culture and politics. These are, in a sense, explanatory abstractions or expository concepts, and yet, as distinctions, we know implicitly what they mean or intend.

Which brings us to the pragmatic matter at hand, the break-up of the Western mind. Everywhere we look within the sphere of social existence we see nothing but dissension and internecine conflict: between competing visions of political arrangements and governing principles, between opposing economic structures, between the religious and the secular, between the Book of Revelation and the Great Reset, between men and women, between sex and gender, between biology and constructionism, between transgenderism and (misnamed) Conversion Therapy, between science and advocacy, between the individual and the collective, between the vaccinated and the unvaccinated, between the global and the local, between merit and mediocrity, between equality and equity, between the Left and the Right, between morality and expedience, between the flickering truth and the marmoreal lie, between ruler and ruled, and—as some believe—quite frankly, between good and evil, with evil gaining the controlling share of the cultural enterprise.

The result seems foregone. As poet W.B. Yeats wrote in 1919, “the centre cannot hold;/mere anarchy is loosed upon the world,” a memorable phrase, apt in every age but possibly never more true than at our present historical juncture. We are dealing with a plague of ignorance, susceptibility, corruption and entrenched institutional deceit so massive and unprecedented that no practical antidote to dilute its effect seems available to us. Politics has embraced the malignant spirit of a contaminated culture—but it is a culture that reflects the broken mind and moral destitution of a decadent elite and an easily swayed and pusillanimous populace.

The culture is terminally ill, the visible residue of the broken mind. As Philip Carl Salzman points out in telling sequence, the three forms of “capital” essential not only for prosperity but survival itself—energy, agricultural and human—are being destroyed in the name of illusionary fabrications like “climate change,” “social justice,” “feminist theory,” “white fragility,” and “stakeholder capitalism.” We are witnessing a multi-vectored assault on the democratic nation state and its foundational principles. What is approaching in the great historical cycle of nations and civilizations is beyond our knowledge, but the tremblors are detectable.

Aided by a degenerate and perjured media, the debacle is materially facilitated by public compliance with authority, primarily in the Anglosphere nations like the U.K., Australia, New Zealand and Canada, though the contagion is spreading. Fearful public acquiescence to the fraudulent pandemic regimen makes this abundantly clear. This is the essential factor in establishing dogmatic control over society. It appears you can fool most of the people all of the time. The narrative anchoring the one-size-fits-all “liberal globalist order” that seeks to weaken or annul national identity and local governance trumps love for the homeland, common sense and the exercise of reason. The cultural consensus and the political system with its roots in Magna Carta and the Peace of Westphalia are broken beyond repair.

Ghent University professor Mattias Desmet has analyzed in painful detail the nature of mass formation psychosis, in which not only are public and political spaces dominated by indoctrination and propaganda, but private space as well. The identity of the individual melds with the agitprop of the governing elect as the public square fuses with the citadel of the elite. Desmet refers to Hannah Arendt, who observed in The Origins of Totalitarianism that this unholy covenant is the prelude to the emergence of the totalitarian state, which can be consolidated and garrisoned only when it co-opts the intimate belief and full consent of the individual subject. Perhaps this is our destination, whether in the form of the U.N.’s Agenda 2030 adopted by the World Economic Forum or a state of civilizational anarchy.

The fact is that we are living in a cultural world that is in the throes of terminal despair. One recalls Danish philosopher and theologian Søren Kierkegaard whose The Sickness unto Death construes despair as a loss of self for those who do not know they are in a state of despair—both the elite and the multitudes. As Kierkegaard wrote, “The despairing man who is unconscious of being in despair is…a negative step further from the truth and from salvation.” When the mind of a people lies in shards and fragments and there is insufficient notice of the debris, a failure to recognize that despair, as Kierkegaard urged, is a call to retrieval and health, the effect on cultural life, and thus on political life, is clearly pernicious. The rot will have bitten too deep for recovery, or as some like to phrase it, we will have passed the inflection point.

Writing in The Pipeline, David Cavena isolates the three principal threats we now face: “the hoax of ‘climate change’; the manmade bioweapon of Covid-19 and its accompanying, perhaps even more lethal ‘vaccine’; and virulent, Democrat racism being used to attack both private and public sectors of society, our education, and the military. All are existential threats to freedoms and liberties that only exist in the West.” These issues are so big, he continues, “and our reliance on experts so complete, we wind up in messes like the ones in which we find ourselves today.’ Cavena quotes Alexander Solzhenitsyn: “When one is already on the edge of the grave, why not resist?”

Similarly, as I argue in a previous article for PJ Media, although it may be impossible to reverse our cultural trajectory, conservative resistance must continue if only to extend a precious interval of civil existence for ourselves and hopefully for our children. An important election win, a populist revolt, the scuttling of Woke schoolboards and Critical Race Theory, a growing exposure of corruption among the various political echelons, international organizations, NGOs, medical consortia, digital platforms, think tanks and so-called “thought leaders” are all necessary to postpose the inevitable. Regrettably, the forces of dereliction may be stalled for a time but not unconditionally defeated, not until they take their world down with them, a Pyrrhic victory if ever there was one. But deferment remains the name of the game.

Drawing from historical antecedents, C2C Journal senior editor George Koch points out (personal communication) that Byzantium survived for almost a millennium against its enemies and “in doing so, it preserved a trove of priceless documents that fuelled the Renaissance.” Similarly, “Dacia reorganized itself after Rome pulled out, and retained an almost perfectly Roman culture, government and army for some 75 years while surrounded by chaos.” But neither could hold out indefinitely. For those who have remained sentient, our insular situation as a civilizational stub is in some ways analogous, although the time frame has perilously contracted. George Steiner may have been right when he imagined a future of small, monastic flares of intellectual light sprinkled across a desolate landscape, reviving Max Weber’s notion of outposts of enlightenment as the last resort of a civilization sinking into darkness.

We have to be realistic. Our only option is to keep what is left of the Western mind intact for as long as possible while the culture and its political embodiment crumbles around us. Cavena believes in American resilience, but the vast architectonic of civilization is another matter. There may still be “populist” enclaves—provinces like Alberta and Saskatchewan in Canada, states like Florida, Texas and possibly a few others in the U.S., countries like Hungary, Italy and Sweden—that may resist the general collapse and remain livable. A big perhaps. But we should not fool ourselves into believing we can make Western Civilization Great Again. Best to be prepared. The Wheel of History has turned.