Look carefully at the words above the entrance to a car park near my home: 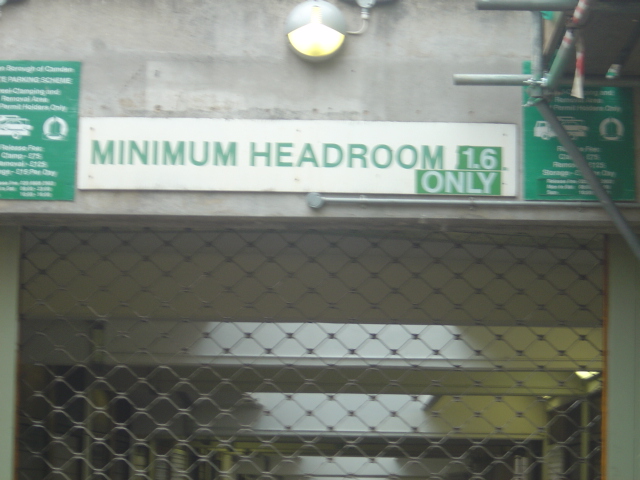 Can you see anything wrong with them? If not, look again: “Minimum Headroom 1.6 only”.

Strictly speaking, this means that a car needs to be at least 1.6 metres high – I assume it is metres – in order to be allowed in. Motorcycles, obviously, will not be permitted, nor will pedal cars. Double-decker buses and cranes, on the other hand, are welcome.

This is nonsense, of course. It should say “Maximum Headroom”. Not only does “Minimum Headroom” not make sense here; it can never make sense as a warning. The very word “headroom” in warning signs carries necessary connotations of an upper limit, while “minimum” means a threshold or lower limit.

Be honest with yourself – did you realise immediately what was wrong with the notice? I didn’t straightaway, and my walking companion, and friends I told about it later, didn’t at all. The person who painted the sign didn’t realise either, unless the addition of “only” is an attempt to correct the muddle. Users of the car park haven’t noticed; the sign has been there for years, judging from the condition of the paintwork, and nobody has seen fit to change it. Yet the mistake is glaring: minimum is the opposite of maximum. It’s like saying: “Caution: dry paint.” How could we miss it?

Clearly context plays a role. Here there is the visual context of the setting. We have all seen signs on entrances to car parks saying “Maximum Headroom”, so we assume, unthinkingly, that this one says – or at least means – the same. Perhaps we don’t even read the word “Minimum”. But even if we do read it, and register it as odd, as I did, our brains play tricks on us, and we try, against our rational judgement, to twist the words into something that makes sense, or more accurately to bypass logic altogether and read what we feel it should say.

Look at the following sentence:

“This product fills a much needed gap.”

It doesn’t really make sense. You need a gap like a hole in the head. Yet we make sense of it. The sentence would be judged by many to be incorrect because it is not logical. But does logic determine correctness? Should it?

George Orwell, whose writing I generally admire, was wrong to call for simplification of double negatives in such phrases as “not unattractive”. “Not unattractive” doesn’t mean the same as “attractive”, although logically it should; rather it damns with faint praise. Language is not like mathematics, where two minuses make a plus. And once we move out of Standard English, logic flies out of the window and colour flies in:

I for one would not object if multiple negatives were “allowed” once more, or other grammatically suspect constructions like the heartfelt plea: “Is you is or is you ain’t my baby?” They may not make sense, taken literally, but language is not always meant to be taken literally.

“Literally” – now there’s a word that fills a much needed gap. Does we do, or does we don’t abuse it? The late John Diamond once wrote in The Spectator about a correspondence course run by The Writers [sic]  Bureau:

Mr E H Metcalfe has written from Manchester to tell me that if I send him £189 “The world can literally be your oyster.”

III.            What do you think are the chances of my becoming a well-paid and successful writer under Mr Metcalfe’s tutelage?

Mr Metcalfe is principal of The Writers Bureau (no, I don’t what’s happened to the possessive apostrophe either) of Dale Street, Manchester….[P]ersevere (“The most important quality you require is not
brilliance, but perseverence” (sic) confides Mr Metcalfe) and eventually the literal thing with the oysters will start to happen.

Diamond’s piece is very funny, and it is a great shame that he died at only forty-seven while many a dullard lives to a ripe old age. His mocking of the misuse of the word “literally” is the best I have seen.

But is it misuse? I have always thought so, believing that the word should be reserved for real cases rather than used for emphasis. In my piece here, I comment in passing on how “literally” has been cheapened by overuse and incorrect use. And I have always assumed that “literally” used to be used correctly, and that sloppiness has crept in recently. However, I now find that I am mistaken, and must literally eat my words. Jessie Scheidlower writes:

As is often the case, though, such “abuses” have a long and esteemed history in English. The ground was not especially sticky in Little Women when Louisa May Alcott wrote that “the land literally flowed with milk and honey,” nor was Tom Sawyer turning somersaults on piles of money when Twain described him as “literally rolling in wealth,” nor was Jay Gatsby shining when Fitzgerald wrote that “he literally glowed,” nor were Bach and Beethoven squeezed into a fedora when Joyce wrote in Ulysses that a Mozart piece was “the acme of first class music as such, literally knocking everything else into a cocked hat.” Such examples are easily come by, even in the works of the authors we are often told to emulate…

How did literally come to mean the opposite of what it originally meant? The earliest uses of literally were “in a literal manner; word for word” (“translated literally from Greek”) and “in a literal sense; exactly” (“He didn’t mean that literally”).

By the late 17th century, though, literally was being used as an intensifier for true statements. The Oxford English Dictionary cites Dryden and Pope for this sense; Jane Austen, in Sanditon, wrote of a stormy night that, “We had been literally rocked in our bed.” In these examples, literally is used for the sake of emphasis alone...

Why, though, did this usage of literally suddenly come under such fire? It is not the first, nor will it be the last, instance of a word that is used in a seemingly contradictory way. There are many such words, and they arise through various means. Called “Janus words,” “contranyms,” or “auto-antonyms,” they include cleave (“to stick to” and “to split apart”), dust (“to remove dust from” and “to sprinkle dust upon”), moot (“able to be discussed; arguable” and “purely theoretical”) and peruse and scan (each meaning both “to read closely” and “to glance at hastily; skim”). Usage writers often criticize such words as potentially confusing and usually single out one of the meanings as “wrong,” the “right” meaning being the older one, or the one closer to the word’s etymological meaning, or the one more frequent when 18th-century grammarians began to examine language systematically. It’s not always possible to predict when something will be condemned

In the case of literally, the “right” meaning is said to be “exactly as described; in a literal way,” because that’s what the base word literal is supposed to mean. In fact, the literal meaning of literal would be something like “according to the letter,” but it’s almost never used this way. “He copied the manuscript literally” would be one possible example. So when we use literally to refer to something other than individual letters—to whole words, or to thoughts in general—we are already walking down the figurative path, and if we end up with people eating curry so hot that their mouths are “literally on fire,” how surprised can we be?

Strictly speaking, “Minimum Headroom” is a sin against logic. But should we judge the writer too harshly, when Dryden, Pope and Jane Austen can use “literally” to mean its opposite? I ain’t got no clue.

Now, perhaps I’d better move out of the way. A bus driver has taken the “Minimum Headroom” warning at its word and is hurtling towards the car park. Try to tell him it was a mistake, and he will literally raise the roof.

To help New English Review continue to publish musings on language such as this one, please click here.

If you have enjoyed this article, and would like to read other articles by Mary Jackson, click here.

Mary Jackson contributes regularly to The Iconoclast, our Community Blog. Click here to see all her contributions, on which comments are welcome.

PrevA Strange Alliance
How They Sang The WarNext