No VBS This Year, Here’s Your Pride Pin Instead 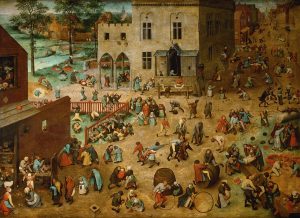 In late February, a Gallup poll came out indicating that just over 20% of Gen Z adults (born 1997 to 2003) identified as LGBTQ+ or “something other than heterosexual.” The number seemed staggering, especially when compared to the meager 0.8% of adult Traditionalists (born before 1946) who identified in this way. When I looked at the data, it became plain to me that the numbers were increasing exponentially every fifteen years. With every generation, they were doubling.

I asked my fifth-grade daughter what she thought, and she said the numbers sounded too low. She said in her class she thought about 30% identified as not straight. To make matters stranger, our neighbor, a fifth-grader I had known since he was in kindergarten, now claimed he was gay, and he was in love with his best friend that he had known since birth. He had always been very proud of the fact that they were born at the same hospital within weeks of each other.

When I tried to compare this to my fifth-grade experience, I was left with a sense of confusion. In fifth grade, in the early eighties, some girls (usually the more popular kids) “went with” certain boys (also usually the more popular ones). “Going with” a boy involved talking on the phone and, possibly, if the parents allowed, meeting to go to a movie together. We had square dances that I think involved some touching (?). If there were children with homosexual inklings at my elementary school, I never knew about it.

Still, I felt that our neighbor, whom I will call “Jason,” wasn’t really gay.  In fourth-grade Jason kept a journal of the various girls with whom he was in love. He brought the diary over to our house, laid it out on a table on the porch where everyone could see it, and asked no one to look at it. My daughter and her friends, of course, had read all the salient sections in no time. “Jackie was hot!!!” He dreamed of kissing her. There was a list of all the girls he dreamed of kissing, and by the middle of fifth grade, he had dated practically none of the girls on his list, but he had had other girlfriends, some for a day, others for as long as a couple of months. He had a preoccupation both in real life and in the journal about girls.

When the summer of 2020 occurred, Texas had been in lockdown for a few months, and Jason was over at our house on most days. I had a deadline for a research project to meet, and so the kids usually played Minecraft or Adopt Me! to pass the time. There were no Vacation Bible School (VBS) or summer camps being offered that summer. One day I heard the kids talking about Pride Pins on Adopt Me! They were free for all players and could be pinned on an animal every hour at no cost. There was a Pan Pride Pin for pansexuals; an Asexual Pride Pin for asexuals; an LGBT Pride Pin for lesbians, gays, bisexuals, and transsexuals; and an Enby Pride Pin for non-binaries. I can remember being outraged.

“This is not appropriate for children,” I railed. “If that’s your preference, that’s your business, but don’t try to promote it to kids.”

My daughter and Jason seemed to agree with me, but I also wondered about those terms being thrown around like “pansexual.” Why was it even necessary to call someone “pansexual”? If there were only two genders, why wouldn’t “bisexual” suffice? I did some research and found out that “pansexualism” originally was a term first used in 1914 to indicate “sexual deviancy” in The Journal of Abnormal Psychology. Apparently, a doctor named J. Victor Haberman used the word to criticize Sigmund Freud’s method of psychoanalysis, especially “the pan-sexualism of mental life which makes every trend revert finally to the sexual.”

The other term that I was not familiar with was “non-binary,” a person who neither identifies as male nor female. Again, I was working off the premise that there are two sexes, male and female, and that almost all animal species procreate through insemination by the male into the female. I could find virtually no publications about non-binary people prior to 2010. The Enby flag, for example, was created in 2014.

This year, when I found out that American Olympic figure skater Timothy LeDuc and his skating partner Ashley Cain Gribble trained in Dallas, Texas, not far from where I live, I decided to read up on the pair, beginning with Le Duc. I read this section of the Wikipedia entry on his personal life:

Timothy LeDuc was born on May 4, 1990 in Cedar Rapids, Iowa. When they first came out as gay at age 18, fellow Christians attempted to make them straight through conversion therapy, which LeDuc rejected.

At the time of reading this entry, I had no idea that LeDuc identified as non-binary. I just remember reading this passage at least twice and wondering who else was being discussed as part of his personal life. Benighted me, I didn’t know that he was “they.” But now I know, and it seems to me an act of hubris to give oneself a dual identity, almost like a king referring to himself as “The Royal We.” Yes, that is how I see it, as not only ungrammatical, but self-aggrandizing and delusional.

I still contend that what Adopt Me!, Tik Toc, and YouTube are doing by promoting such things to children is criminal. I also worry for the future of children like Jason who break their innocent same-sex relationships and embrace this confusion. One person cannot be two people, and we should not entertain such notions in order to please a demographic that keeps pushing their Kool-Aid onto younger and younger audiences.

PrevEþandun: An Epic Poem in Twelve Parts (Bk XI)
Tax Tips from the Rich and FamousNext