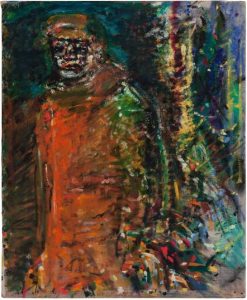 He who does not regret the break-up of the Soviet Union has no heart; he who wants to revive it in its previous form has no head. —Vladimir Putin

Vladimir Putin once claimed that the Russian army could take Kiev in two weeks if the need arose. Two months into the so-called “special military operation” of 2022, Putin’s forecast seems to have hit a wall of reality. Or as Robert Burns might say, “The best laid schemes o’ mice an’ men / Gang aft a-gley.”

Early on, the Kremlin sought to decapitate Ukraine by seizing Kiev and other cities in the northeast with special forces, backed by armor and artillery. The conventional blitz stalled short of Kiev due to unwarranted optimism, unanticipated resistance, and an apparent logistical “cluster foxtrot,” as an American GI might put it. To their credit, the Kremlin adjusted quickly, changing military leadership and operational plans. Less ambitious, albeit more realistic, objectives now characterize Moscow’s operations at least for the near term.

The axis of attack is now focused on the Donbas border region and the Azov/Black Sea littoral.

Donbas has been at war for ten years now and, heretofore, much of the fighting there was done by 30 some odd “right sector” volunteer militias. These neo-Nazi, self-described “anarchists” came to prominence during the 2014 Maidan coup. Not coincidentally, the more infamous neo-Nazi Azov Battalion is the unit surrounded by Russian naval infantry today in Mariupol. 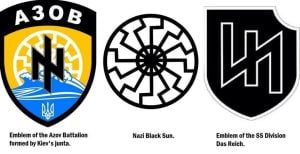 If General Alexander Dovornikov manages to cut off the right sector “volunteers” in the Donbas sector and crush the Azov fighters at Mariupol, then the Kremlin will have met a large part of their de-Nazification strategic objective.

Conversely, should Ukrainian Nazi nationalists win anywhere, Ukraine and Zelensky still lose, thanks to CIA, NATO, and Victoria Nuland at the US State Department. So far, at the tactical level, the Right Sector has done well as anti-Russian partisans. How well these anarchic volunteers hold up as the Russian “operation” morphs into war remains to be seen.

Chokehold strategy seems to have similar objectives in the South, where Kiev might have to tap out without access to the Azov and Black Seas.  Most agricultural output goes by sea. If Russia controls Ukraine’s waterways, game over in the long run. The impact of Kiev not getting a crop in the ground soon and not being able to ship, combined with sanctions on Russia (Biden’s dollar weaponization) are now global problems. 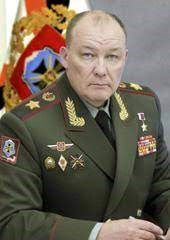 Ultimately, General Dvornikov (right) would probably like to control the breadbasket east of the Dnieper. If he secures the western border of Russia and Mariupol; Mykolaiv and Odessa to the west are probably next on the hit list. The port city of Odessa, like Sevastopol, has significant Russian ties.

Putin is a lot of things, but he is not some nutter or some “woke” sissy trying to reclaim empire. To his credit, from a realpolitik perspective, Putin already separated himself from NATO dilettantes. He is willing to bleed Russia, change commanders, and change strategy until he gets a winning combination, the kind of military moxie that hasn’t been seen at NATO or in the Pentagon since Korea.

In the end, pain thresholds may be the difference between success and failure in Ukraine. The stakes for Moscow and Kiev are existential. Regime change in either capital is still on the table and Putin and Zelensky know it, “existential” is personal for both men. Brussels and Washington, in contrast, seem to view Ukrainian and Russian leaders as tactical cannon fodder, another chapter in a Cold, now hot, War underway since 1948.

Ukraine, alas, is likely to be road kill on any count, after she is finished being used by both sides.

Intractable or existential strategic objectives for Kiev and Moscow are pretty clear; Brussels and Washington, not so much. We don’t hear much about what victory looks like for the West these days, because the only players that really matter, Moscow and Washington, are playing with Ukrainian blood chits and Russian body bags.

In any prolonged conflict, Kiev is in danger of becoming another near-sighted business opportunity for the NATO “defense” industries whilst Ukraine and Zelensky become rubble and kibble for the big dogs, the real antagonists. China, India, and the Muslim world are sitting on the fence leering like vultures waiting to pick over the carnage. Whoopi, of all people, captured global racial sentiment best. “Whites on whites,” who cares?

Alas, if we believe the logic of deterrence; the prospect of Russian conventional defeat lowers the nuclear threshold.  First use and last use become interchangeable in a world where deterrence fails catastrophically. When you can’t win by other means, the last chapter in modern warfare is massive retaliation, the Strangelovian, nee RAND Corporation, euphemism for radioactive revenge.

The only sure loser in the East European edition of the “big game” is Ukraine. So far, the best that can be said is that grotesque is being normalized.