Pandemic or No Pandemic—I’m Getting Married! 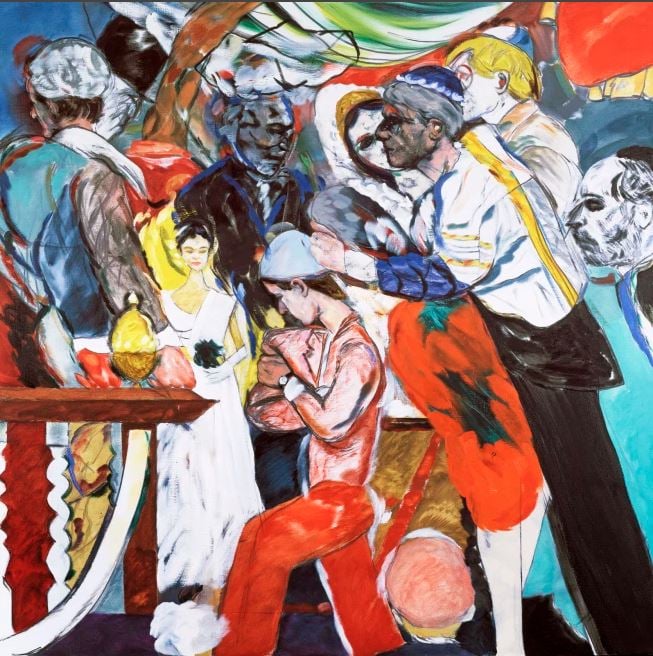 The young man got up early, at sunup, as usual. The spring sunlight coming through the window and through the thin, white curtains always woke him up. For some reason, in waking up by sunlight he felt rested, whereas if he woke up by an alarm clock, without the aid of sunlight, he usually felt tired. Today, of course, he not only felt rested, but instantly energized. He got up and looked out the window at the clear blue sky. A perfect day for a wedding, he told himself.

Not that Mirco was nervous, or excited about it, just resigned to the inevitable. He was energized simply because he was going to be very busy that whole day. He wondered how many people would actually show up, what with the pandemic panic and all. In order to slow down the spread of the virus, a lot of businesses, restaurants, and theaters had closed down, making life boring. The original venue that she had chosen for the wedding had bailed out, and her parents had frantically looked around for one that could be relied upon to cater to them. In the past couple of weeks, traffic had thinned out to the point that traveling in the city had become pleasant again.

Mirco had coyly suggested to Lydia to postpone the wedding until after the so-called crisis ended, but she had exploded at the suggestion. “No way! Pandemic or no pandemic, I’m getting married!!” He had wisely not debated the topic again. Besides, he knew that she wanted to get married before she had the baby, not after.

The whole “crisis” was idiotic anyway, in his opinion. The media was just spreading panic, having latched on to the topic. The mortality rate was a mere 2%, and almost all of them were old people, for Chrissake!

“Good,” he had repeatedly said to several of his friends. “Let them die. The old geezers are just taking up room. It’s time for them to die. There’s too many old people anyway. They’re not good for anything.”

As was his routine, he sat on the sofa to watch the early morning news. And sure enough, it was pandemic, pandemic, pandemic. Or, rather, people reacting to the panic. There were some temporary, yet severe, scarcities for some food items in one city or another. But, for the past two months, for some bizarre, insane, inane, reason, people had bought up all the toilet paper throughout the country! There was such a scarcity that toilet paper was as valuable as gold—but less durable.

“A riot almost broke out when the police showed up to arrest a hoarder that was selling individual toilet paper at $45 per roll. The authorities claimed that the man had over a hundred rolls stashed away that he was now selling. In spite of the high price, such is the demand, that there was a very long line of people waiting to buy the items. When the police showed up to arrest the man and confiscate the toilet paper, the customers became irate and started yelling at the police and pelting them with bottles and rocks. Ten arrests were made on top of the hoarder.”

That story led to another one, in a different city, where customers had learned that a new supply truck of toilet paper would be arriving at a supermarket and they had clustered around the entrance looking through the glass doors like ravenous wolves at a deer. When the store clerk opened up the door, a flood of people rushed in like stampeding wildebeest. The clerk had fallen on the floor and been trampled to death. And on top of that, several vicious fights had broken out throughout the store over rolls of toilet paper that people were fighting over, at least one roll being shredded in the process as three people fought over it. The videos showed it all.

Mirco thought it was hilarious, although he, too, was concerned about the shortage. Six days ago, while he was at work, someone had broken into his house, ignored the television, the computer and everything else, and had taken off with his five rolls of toilet paper. Fortunately, he still had one left.

The next story even the journalist covering it thought was amusing. A group of high rollers in Las Vegas had sat down for a poker game. But instead of using chips or money to stake in the game, the gamblers were betting rolls and rolls of toilet paper.

The station now went to a commercial break.

And with perfect timing, the telephone rang.

“Hey, Pop! What you doing so early? You never wake up before nine.”

“We went down to the store to get some groceries, since today’s gonna get hectic later on. But aside from the food, we got six rolls of toilet paper. You need any?”

“The manager owed me a big favor. Never mind what. We’re even now.    But do you need any?”

“I could use a roll. But, come on, Pop! Today’s my wedding and you’re talking toilet paper? Come on!”

“Well, that’s the real reason I’m calling. Is the schedule still on? Any last minute changes?”

“Really! Ok, then. See you at the church. Oh, one more thing: when you get the roll of toilet paper make sure to hide it inside the mattress. Ciao!”

The channel announced itself after the commercial break for those who had just tuned in. “BSNN, the most trusted news source in the world.”

The news came back on and several journalists interviewed each other, “revealing” (they had agreed on everything beforehand) that the president was responsible for the pandemic, that his calling it the Chinese Virus was racist (even though all the doctors in the world were calling it as such), and that his order to restrict flights coming into the country from the epicenter of the pandemic was a racist tactic, whereas the humanitarian thing to do was to open all the borders and allow anyone into the country from anywhere, because, after all, this was a country of immigrants.

Mirco turned off the television and began to get ready.

Much later, he drove to the church where he was to be married and parked his shiny red mustang half a block away. As he got out of the car, he saw a man in a trench coat on the opposite street corner beckoning to him. Out of curiosity, and not the least bit nervous since he was young and physically fit, he approached the man.

The man’s face had a sly look. “Hey, buddy. You want . . .” he looked left and right, then opened his trench coat with a flourish. “ . . . toilet paper?” He had a roll of toilet paper attached to either side of his coat. “Only fifty bucks each.”

Mirco rolled his eyes, shook his head, and headed back to the church, ignoring the man’s urging him to strike a deal.

Just outside the church, an usher greeted him. “Hello. Are you here for the Lydia Tabaka wedding?”

“No. I’m here for the Mirco Pusinelli wedding.” The usher looked perplexed, trying to think if there was another church nearby having a wedding. “I’m just messing with you,” Mirco smiled. “I’m Mirco Pusinelli. I’m the groom.”

“Ah! You got me,” the usher chuckled.

He went inside and mingled with his friends, who were as unexcited as he was. The unstated fact of all weddings is that the groom is always just there as a prop. The countless trivial minutiae of weddings and the reception afterwards—what kind of flowers, what type of napkins (and are they to be folded and, if so, into what shape), what gowns to wear, what corsages to wear, what songs to choose, the venue for the wedding, the venue for the reception, the seating at the reception, the flowers at the table, the menu—are important only to the bride, who obsesses over them. The groom could care less about any of it and, besides, his opinion is ignored, anyway. So, the men who attend weddings do it out of courtesy, like going to a funeral, bored out of their skulls, wishing they were anywhere else but there, and interested only in what’s for dinner at the reception and whether there are any single chicks that they can hook up with afterwards.

The groom was at least grateful that the bride’s parents paid for everything. The expense was hair-raising.

So Mirco’s brief wedding ceremony proceeded as expected, and so did the lengthy reception, both with a good turnout. The guests departed, the families departed, and Mr. & Mrs. Pusinelli left for their apartment to check out the gifts, prior to leaving on their honeymoon.

And, of course, the gifts were as expected, since she had had her wedding registered at several stores, so there was the toaster, the toaster oven, the plates, the silverware, the blender, all the usual mundane household stuff. All the gifts were geared for the bride, of course, although his name was included in the card, just out of courtesy—or pretense, depending on your viewpoint. There was one unusual gift from Frank, their oddball friend, which they did not know whether to laugh over it or be appreciative. It was a ceramic panther resting under a palm tree, all in a shiny black. That was the only unexpected gift that they had come across. Another was a large gift, giftwrapped, as all were, that came up to the hip, but was lightweight.

“Ah,” Lydia exclaimed. “It’s from Angela. “I’ll bet it’s the curtains. They’re made of a light material.” Mirco quickly unwrapped the gift, revealing a 12-pack roll of toilet paper in its original wrapper.

“And it’s Charmin! And it’s 2-ply!” she said as a tear rolled down her cheek. “She’s so sweet, always so thoughtful.”

Mirco had to admit that it was true.

Armando Simón and Telly Simon are the authors of Indonesians: Tales From Parahiyangan, a collection of short stories..