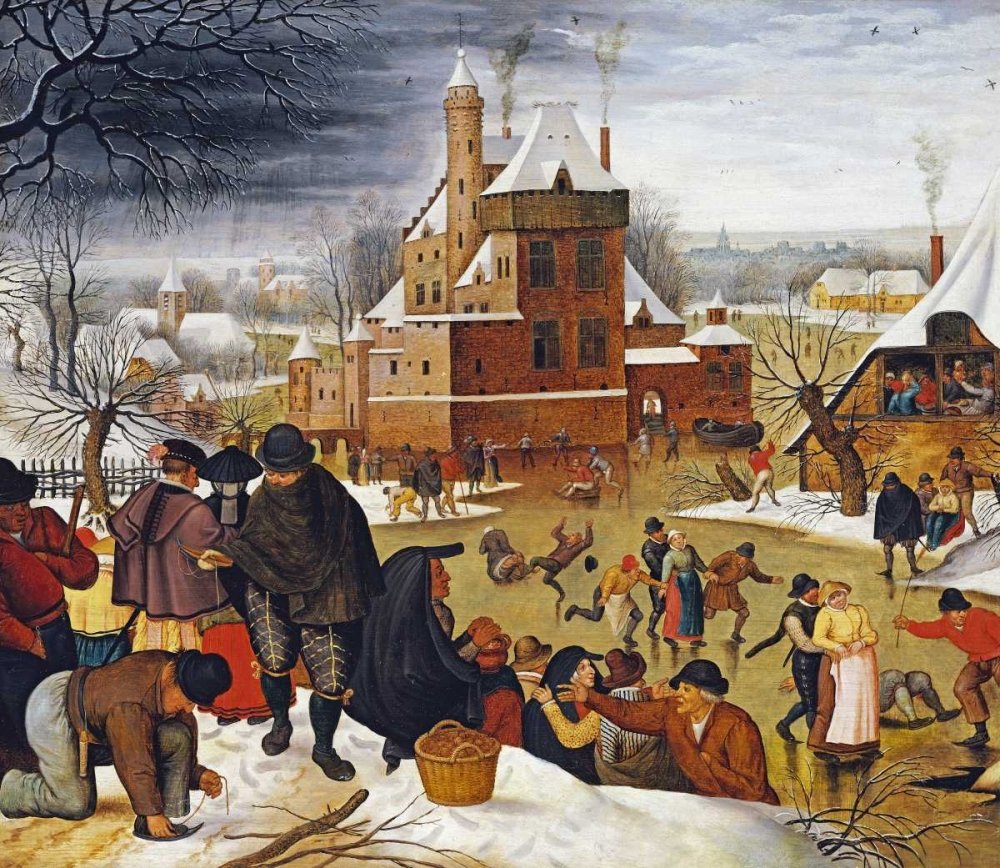 Townsfolk Skating On a Castle Moat, Pieter Bruegel the Elder

Once there was a boy and his name was Ferret and he looked like a gnome and all the other kids picked on him. But when Ferret got older he vowed to get revenge on mankind now that he was a man, since he had not been able to exact it on boykind.

He moved to the land of Woodmanity—he was familiar with it because it was nearby, but nobody there would be familiar with his sad history—and lived under the drawbridge on the banks of the moat of the Castle of Banelle.

Eventually one of the nobles saw him and told the king about him, thinking the pest should be gotten rid of, since he was awful to look at. But the king, being a very wise man, said: “Give him a job. Perhaps we could use somebody to tend the moat, dredge the garbage out of it. Otherwise we may have even more rats in here than we already do.”

So, Ferret now had a job—a position in the king’s court, the way he viewed it. He made a big deal of dredging the garbage out of the moat, he acquired a gilt-edged ledger and noted every little piece of flotsam and jetsam that he collected. He also scrubbed the castle wall just above the moat all around the castle, even though this had never been done before as far as anybody remembered, but nobody cared that much anyway about the wall just above the moat. Eventually Ferret enlisted some other beggars and drifters who happened by, desperate in their search to somehow keep living. And he soon had his own little court.

Ferret became quite the little tyrant! All his subjects had to report to him daily, giving him detailed accounts of all the various debris they picked out of the moat. He’d give them long lectures about just how to look for items, how to fish them out of the moat, what to keep, what to dispose of and where. In this way Ferret made himself the king of an imaginary little kingdom within a kingdom. And he made his job into a mission and a calling, though it wasn’t even really a job at all; it was just a way for the real king to keep him out of mischief and save the bother of removing him. It did keep some rats out, too, of course, but not nearly as many as the real king had hoped.

This went on for a good five years. Ferret had only had one problem in that time. There was a small boisterous lad named Pluck, fresh-faced and eager and full of it. Pluck was roaming through the countryside and found himself lost and there was Ferret and Pluck was hungry. He sensed Ferret was evil, but still Pluck thought there was no man who was too much for him. Pluck didn’t reckon, however, that he was just the kind of lad whom Ferret hated, one who was easygoing in manner and appearance like the boys who once mocked Ferret. So Ferret made Pluck’s life miserable.

No matter what grand things Pluck plucked out of the moat—a watch, a bow tie, expensive cuff links—Ferret said it wasn’t enough, and not only that, he hadn’t retrieved them properly, and no matter how valuable and beautiful they were when polished and presented to Ferret, they were unacceptable. Ferret had concerns about everything Pluck said or did, even though Pluck got him out of many embarrassing jams when it came to filling-in his gilt-edged ledger.

After a few years Pluck was discouraged beyond what he’d imagined possible. Serving Ferret was harder than being a beggar in the countryside. So one day, after Ferret refused upping his ration of bread because he wasn’t bringing him more and more items in a given time period, Pluck drifted away and determined to live off the land.

All went well for Ferret for another five years. He now had dominion over a dozen or so unfortunates, whom he made to feel grateful for what he saw as his largess and open-mindedness and bigheartedness. But around the same time that Pluck had joined Ferret’s unmerry band, the king appointed another potential nuisance as a court jester. (The king was a big believer in using everything thrown his way, and that the most useless things of all often turned out to be the most useful.) The king did this in spite of the fact that Grouse, the down-and-outer he hoped would amuse him and the court, had no sense of humor whatsoever. Grouse was a vindictive sort like Ferret, and had been tossed out of every castle in the countryside of Woodmanity.

At first Grouse befriended Ferret. They were soulmates thrown together by the heavens, and besides, nobody else in the castle wanted anything to do with either one. As timid and niggling as Ferret was, Grouse was bold and ridiculous. Soon Grouse adopted Ferret’s strategy of recording everything in a gilt-edged ledger, all of his routines and sketches to please the court. He also rounded up some unfortunates to grind out new jokes and skits to ingratiate himself with the nobles and the king, not realizing that spontaneity was at the heart of being a true jester.

So Grouse and Ferret formed an alliance of sorts. But it was an uneasy alliance. Soon Grouse tired of Ferret’s quirks—his quivering Adam’s apple, his baggy clothes over his emaciated figure (he never seemed to eat), his strange old-age stench of death that seemed to hang all over him, even clung to his breath. And Ferret was also wary of Grouse—his loud buffoonery, which made Ferret more nervous than the footlong rats he’d had to pull out of the moat, his penchant for outbursts, his wheedling way.

Ferret decided to strike first. One day when Grouse was about to make his rounds of the moat Ferret asked him if he couldn’t give him an account of the routines he was to perform in front of the king, that way Ferret could provide some props and perhaps a routine could be crafted around them so that the king would be pleased and diverted even more. In reality the king didn’t think much about either of them, but Ferret believed that the king was bound to notice his obviously vital contribution of removing flotsam and jetsam from the castle moat. Grouse was incensed. Wasn’t it enough that he racked his brain and the brains of his underlings all day with sights and sounds that would amuse the king? Certainly that was vastly more important than cleaning up the moat, which just got dirty again and had to be cleaned again and again. Flotsam and jetsam were flotsam and jetsam—jokes and skits for the king were priceless.

Ferret rose his stick figure up and said in his squeaky voice, his Adam’s apple quivering like a frightened hare, that he worked day and night cleaning the moat and he got no recognition for it whatsoever, and besides the king thought it was appropriate and right that garbage from the moat be used to amuse him, instead of left to dirty the castle and feed and breed more rats. (Ferret was very in-tune with the king’s love of useless things being put to good use, though he’d never dreamt that he himself was among them.)

Grouse was enraged beyond control and he knocked Ferret into the moat! But Ferret clawed Grouse’s bald pate with his long dirty fingernails, and the pain sent Grouse reeling and tumbling into the moat himself.

By this time both Ferret and Grouse’s charges had gathered on the drawbridge and on the banks of the moat—among them Pluck, who was sauntering on the edge of the forest when he heard the commotion and came running headlong to watch the spectacle. Fortunately, he had regained his exuberance as soon as he had removed himself from Ferret’s clutches and it seemes like he could be anywhere in a flash. But the spectacle soon turned into splendor for the underlings. Neither Ferret nor Grouse could swim! Pluck was amazed that none of them, even he, with his quick mind and wit, had thought of such a simple remedy! Ferret was horrified that the moat was much deeper than he imagined, though his workers had told him this again and again, it’d been a very long time since he’d actually dipped his hand or a pole into the moat to fish out debris himself, and he’d only done that for a very brief period. Grouse, of course, found no humor at all in the situation, but he was amazed to find that the moat had such power over him, it seemed so dull and useless, such an easy job cleaning it, but now as it engulfed him he thought differently, though it wouldn’t have been enough to effect a transformation in him had he lived. In their desperation Grouse and Ferret clutched each other, half trying to save and half trying to drown the other, whether one or the other or how much of each it was impossible to tell.

Anyhow a big cheer went up on the drawbridge and the banks of the moat, and Pluck declared, “You are all free now! Free of the malevolent Ferret and the clamorous Grouse! Free to roam the great verdant fields of Woodmanity and do the heroic deeds that live in your broad lion-hearted breasts!” The crowd hoisted Pluck on their shoulders and carried him away in triumph.

But soon he became restless again and left for a bigger castle named Freemanse, in the faraway land of Dreamarble, and became a very powerful and renowned magician. He even developed a famous spell he called Pluck’s Spell #18 (he’d removed himself from Ferret’s clutches on the eighteenth of the month, and it was also the day of the month he met and fell in love with Lady Swan, and the day of the month he married her as well), which was guaranteed to ward off malevolent moat tenders and clamorous court jesters. But Pluck eventually gave up magic, realizing there was no such thing but the power of God in his heavenly kingdom. And he and Lady Swan lived happily ever after in their cottage, with plenty to eat and enjoy and be thankful for.

As for Ferret and Grouse, the king didn’t even realize they were gone, though the moat miraculously stayed clean as a newborn babe from then on and the king was as pleasantly amused as he’d ever been.

Jeff Plude has been a freelance writer for more than 20 years. He is a former daily newspaper reporter and editor, and he has written for the San Francisco Examiner (when it was owned by Hearst), Popular Woodworking, Adirondack Life, and other publications. His poetry has appeared in the Haight Ashbury Literary Journal.