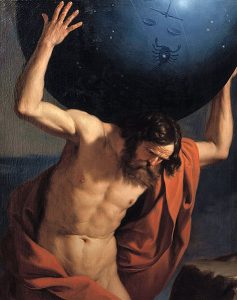 Atlas holding up the celestial globe by Guercino, 1646

Civilized man practices a strange ingenuity in wasting on tedious exercises the brief span of his life.
—W. Somerset Maughan, The Moon and Sixpence1

Minimum attention to detail shows that the lives of radicalized automatons are defined through self-serving contradictory patterns that weave a colossal dystopian rabbit hole of no return. What was once the art of conversation that nourished souls seeking sense from experience has been transformed into empty chatter, the plaything of a vacuous culture and society.

Fortunately, time eventually bubbles truth to the top. If only we had time to tally the final score.

Proclamation of the death of God has been embraced in postmodernity as a hot-button trend by the hipster bandwagon. Most critics assign the God-is-dead-fetish historically to Nietzsche. This is correct inasmuch as Nietzsche thought of the Enlightenment as the killer of God. What can come next: “Must we ourselves not become gods simply to appear worthy of it?”

The death of God ultimately brings about man’s delusion of grandeur that poses as God itself.  Yet poignant observers of the human condition have long settled the score that the true culprit of the death of God is Marx’s inspired demonism: “Religion is the opium of the people.”

Marx, as Marxists have subsequently done to perpetually honor him, took advantage of a civilizational crisis after the Enlightenment for personal gain and to quench his zest for secular, here-and-now messianic power-grab.

Dostoevsky, a deeper and intellectually more sincere thinker than the opportunist, rabble-rousing Marx could ever be, understood that, “When God is dead, everything is permitted.” The latter realization has made relativism and radical skepticism an intoxicating aphrodisiac.

However, what has not yet been settled, a score which the apocalypse brought on by postmodern variants of Marxism that control the administrative state will eventually determine, is what the misanthropic Marx hated most, God or man?

With the death of God comes the deification of man. Deified postmodern man believes himself master of the universe, judge, jury, and most importantly, executioner. It is the latter that has delivered Western civilization to ruin and given us interminable violence, which will ultimately end in apocalypse on earth; people turning on each other, and the administrative state in Western democracies making its citizens into enemies of the state. The only way out of this is for thoughtful people of good will to prevail over radicalized zealots.

Hatred of God has set the course for postmodern man’s self-loathing, for it makes radicalized postmodern man’s pompous sense of self-importance hold up the world on its shoulders, akin to the condemned mythological Atlas.

A time for Fables

Few people are surprised by the truism that societies that are in most need of fables are also the least receptive to them. Our incapacity to no longer be surprised by trendy aberrations is indicative of a truth-rejecting age.

Postmodern man, with his phobia of Christianity, beauty, virtue, and the joy that comes from the exercise of free will, is at ease in a sadistic administrative state. Jacques Barzun is correct in his assessment that we have the culture we deserve. Who needs fables, when fables act as a mirror to morally/spiritually gutted human lives?

Place hollow men and women in power, and you have closed the red circle of moral/spiritual bankruptcy that ultimately spawns violence. For, what matters most to the denizens of totalitarianism is power.

As a consequence, the postmodern socialist administrative state finds it necessary to create depraved agents of totalitarianism who concoct unending bureaucratic disorder.

Aesop’s Fables, the Brothers Grimm, Hans Christian Andersen, a biblical moral tale or two, who needs that reactionary stuff, proclaims the self-indulgent, pre-apocalyptic left. Better to rule in the underworld with Pluto than embrace the redemptive values of discretion and virtue.

Thoughtful people ask, how and when did Western culture turn against itself?  Left to their own devices, the vast majority of human beings are content to live and let be. Well-adjusted people accept and adjust to the limitations of human reality. This is why knowledge of the historical trajectory of Marx and Marxism is of such timely importance today to understand the dissolution of Western values.

There is nothing natural – organically intelligent, that is – about the perpetual belligerence of Marxist intellectuals against Western culture. Their antagonism originates in a pathology that breeds dysfunctionality through hatred of human reality, and that believes itself entitled to the attention of others, regardless of talent, achievements and moral/spiritual redemptive qualities.

Enter the Marxist mastermind of deconstructionism, Jacques Derrida: “deconstruction never had meaning or interest, at least in my eyes, than as a radicalization, that is to say, also within the tradition of a certain Marxism, in a certain spirit of Marxism.”2

At least Derrida is more forthcoming in his diatribe against capitalism, democracy and Western civilization than other Marxists. Derrida declares that deconstruction only aims to deconstruct Western values.

Deconstructionism began in the 1980s as Marxist literary criticism and quickly expanded into Marxist moral and cultural warfare to destabilize Western values. It asserts that traditional ideas concerning certainly, knowledge, identity and truth are only words that refer to other words. Deconstructionism presents postmodernism with the abysmal notion that “there are no grand narratives.”

In short, deconstructionism is the heart and soul of postmodernism’s zest for destruction of traditional morals, culture, and anything that might be construed as belonging to the past. How else will Marxists be able to fabricate the New Man?

When I sat before guest speaker, Jacques Derrida, the then darling of academic doubletalk, at Northwestern University in 1989, I was struck by his very expensive, tailored grey suit and his shiny purple tie. I contrasted the look of this French bon vivant with my student loans; I had a private chuckle that continues to speak volumes about intellectual honesty and the real-world implications of “a certain spirit of Marxism.”

I left Derrida’s lecture after three hours. Derrida’s arrogance kept him from realizing that, when trying to make sense out of nonsense, expediency is the best course of action.

Another graduate student informed me the following day that Derrida spoke for a total of six hours. I suppose, that’s in keeping with the arrogance of other “certain Marxists” dictators.

Derrida’s academic followers are thought of as a cult. By decree, cults must have what fanatical followers perceive as a charismatic leader. In traditional philosophy circles, Derrida is considered a charlatan, a fraud, an avant-garde proponent of unreason who attempts to unseat knowledge; an emperor with no clothes.

How much sense did money make to Derrida?  Did money lose its “fixed meaning” the wealthier he became?

In the late 1980s Yale University and other elite designer-schools dumped loads of money on the stylish French Marxist. In 1987, the University of California at Irving paid him $30,000 to offer a five-week course. If we deconstruct those American dollars, we end up with $6,000 per week, $1,200 per day, and…