Remembering the Movie ‘The Misfits’ 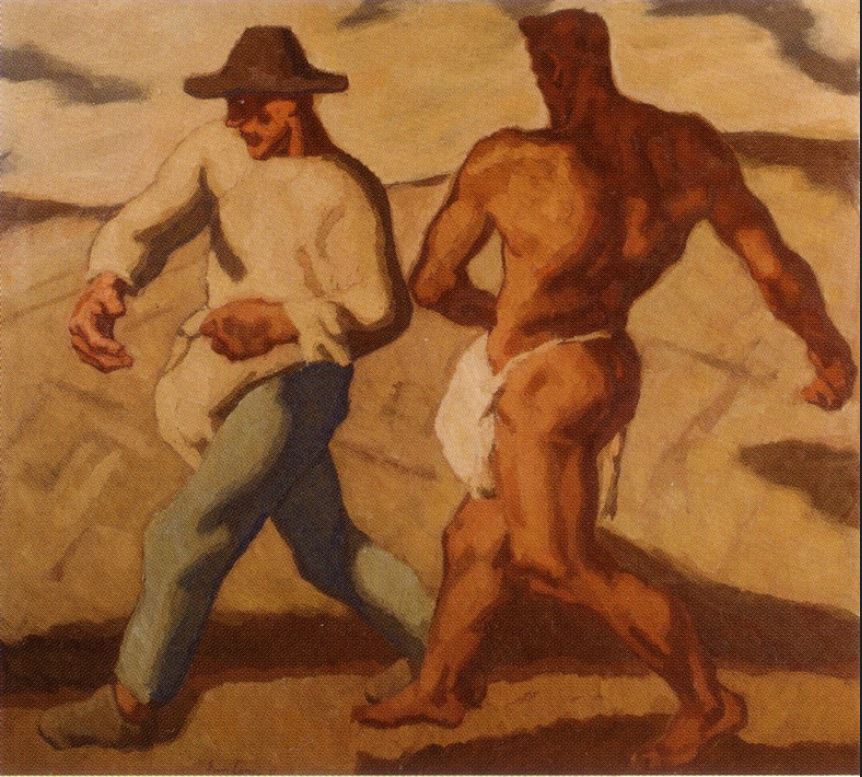 February 1, 2021, is the 60th anniversary of the John Huston movie, The Misfits. I regard this film as a masterpiece, despite being a commercial failure at the time and many critics having mixed views during its release. But before commenting on the movie, consider its theme of existential loneliness in a Godless world (the screenplay was written by the atheist playwright, Arthur Miller (below, left), and directed by Huston (below, right), who was also an atheist). 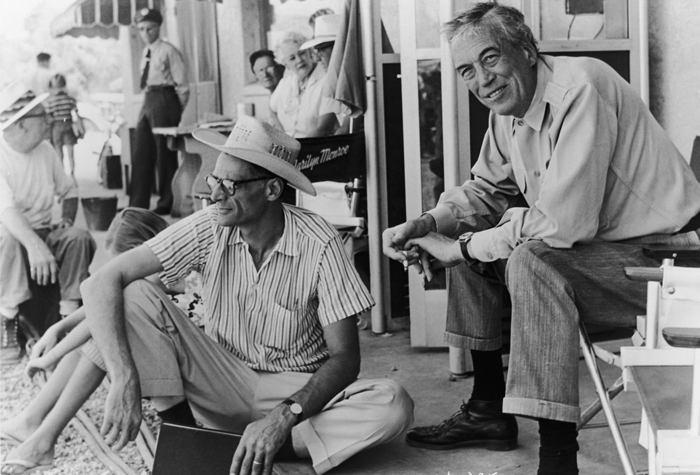 Most of the cast for The Misfits were, at that time, troubled souls and their roles in the film saw them acting naturally, enhanced by the barren landscape of the Nevada desert. The late Irish poet/philosopher, John Moriarty, spoke about the sadness in society and its effect on the landscape.

He once said he sometimes gets on a train and sees people who’ve been “vampired.” “If, while I was in the womb, my umbilical cord had been cut, I would have been in trouble, wouldn’t I? Similarly, if my connection with the Divine is severed, there is essential nourishment I am not getting and whether I acknowledge it or not I am in trouble.”

Sadness and alienation from God are no strangers to the ‘vampired’ characters in the movies of John Huston. Close to the end of the 1950s, he lived in Galway, Ireland. During that time, he was boozing, smoking big cigars and thinking about writing a film on Sigmund Freud.

Huston, whose body of works were literary adaptations, had already directed Sartre’s No Exit, on Broadway, and asked the popular existentialist philosopher/author to write the script, entitled, Freud: The Secret Passion.

Sartre, who was more than familiar with Freud’s work, wrote the script and brought it to Huston at St Clerans in Galway. However, the five-hour script was too long and things in Galway did not turn out to be what both men expected. Furthermore, it seems Huston and Sartre didn’t get off to a great start, with two enormous egos clashing: Sartre talking incessantly and Huston trying to get a word in edgeways.

Huston felt: “There was no such thing as conversation with him. You’d wait for him to catch his breath, but he wouldn’t.” It also didn’t help that Sartre’s first language was French. In his autobiography, Huston wrote that he’d often leave the room in desperation and when he returned, “he wouldn’t have noticed that I’d been gone.”

According to Sartre, Huston was vain and infantile; while Huston saw the French philosopher as, a “little barrel of a man . . . as ugly as a human being can be. His face was bloated and pitted, his teeth were yellowed and he was wall-eyed.”

And Sartre wasn’t impressed with the landscape of the Emerald Isle, with much poverty, death and the ruins of houses surrounded by miles and miles of green fields. As for the script: When Sartre returned to Paris, he made some revisions and the screenplay, besieged with problems, was made some years later. But it was another film that Huston made that I’d like to return to: The Misfits.

When this film first screened, film critic Bosley Crowter wrote in the New York Times: “There is a lot of absorbing detail in it, but it doesn’t add up to a point. Mr Huston’s direction is dynamic, inventive and colorful. Mr Gable is ironically vital. (He died a few weèks after shooting was done.) Miss Ritter, James Barton and Estelle Winwood are amusing in very minor roles, and Alex North has provided some good theme music. But the picture just doesn’t come off.”

With the exception Crowter’s comment on the music score, I disagree with most of his analysis. So, let’s see if the picture comes off or is a turkey. The premise for the movie: Five adults, three men and two women, meet up in a remote house in the Nevada desert. Roslyn (Marilyn Monroe) a new divorcée; Gay (Clarke Gable) a cowboy; Perce (Montgomery Clift) a cowboy; Guido (Eli Wallach) a mechanic; and Isabelle (Thelma Ritter) Roslyn’s landlady. 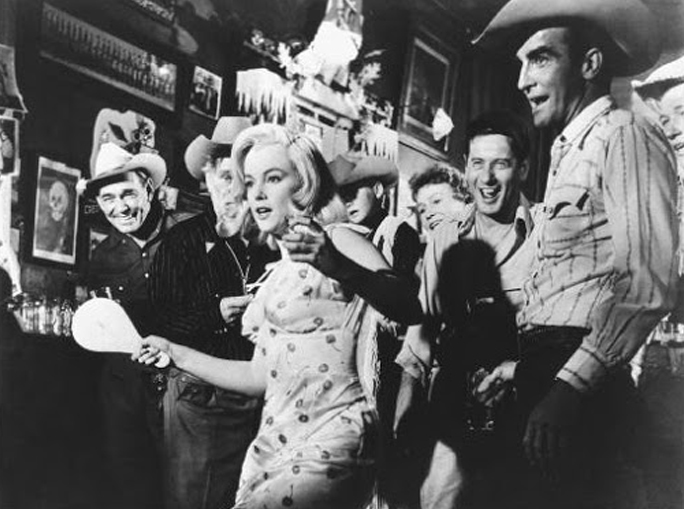 The film, shot in black-and-white, also reflected how socially things were normally viewed before the confusion of the tyranny of identity politics, despite the protagonists’ woes. Overall, people back then just wanted to have fun, earn a living, and talk about the trivialities of domestic life, punctuated by idle gossip.

Throughout the movie, the characters dance, get drunk, and tell sad stories about their broken lives to one another. The excellent music score by Alex North has a pathos that perfectly captures the moods and weariness of the characters. The only functional creature amongst these misfits, besides Isabelle, is Gay’s German Shorthaired Pointer dog, who, along with Roslyn, seems to intuitively get upset and uneasy when the men drive out into the desert to round up mustangs to be slaughtered for dog food.

The Misfits can be analysed in many ways. For me, it’s a great metaphor for a fallen world, or a world without God. There is no mention of the Divine in the film, so it’s no surprise these characters are in trouble and have been “vampired”; severed from any connection with the Divine.

It’s also a good metaphor for a turning point in American culture: The old traditional cowboy entering the 1960s, a time of enormous upheaval of reckless decadence and consumerism. People no longer lived life simply or socially respectable. It was the beginning of “Me, Me, Me” and instant gratification.

The characters in The Misfits are oblivious to this formidable cultural shift that’s about to happen. They’re all likeable ordinary folk but lonely, sentimental and spiritually lost. Even the playwright Arthur Miller was going through his own inner sufferings, with the separation of his wife Marilyn Monroe, who was on the cusp of a nervous breakdown while being hospitalised. Paradoxically, the bleak, dark cloud that slowly began to descend over American culture, and Miller’s pain, manifested in the wonderful storyline and superb prose of the screenplay. As for angst-ridden Monroe’s performance: It was outstanding.

I’ve written about this before about it being odd that the enormous volume of highly artistic works—from movies, drama, literature, poetry to music—are invariably bleak but give us immense joy. One wonders are we better off living in a fallen world after all, as a perfect one without strife would lack in artistic excellence.

But does a world with immense suffering justify moments of optimism through the transient pleasures of the arts, despite their dark themes? After all, one can’t have Miller of Huston’s works without their tragedies, or W.B. Yeats’s poems without a terrible beauty being born.

Then there is the baren, lonely landscape of the desert, the ideal metaphor for the inner lives of the spiritually, fragile five. But there is also something beautiful about this hot, sandy terrain. In my Route 66 road trip around America during the Reagan era of the early-80s, I strayed off the highway to get a brief glimpse of Nevada.

On that memorable trip, there are many fond memories beneath those soulful, Doo-wop skies over the vast desert plains off Route 66. Driving into the night, with the car window rolled down and the radio playing A Thousand Miles Away by the Heartbeats (coincidently, a hit song during the making of The Misfits), the fragrance of the desert breeze was enough to induce slumber.

What did a tiny spec of metal automobile, crawling slowly below on the desert floor, like a nocturnal lightning bug, look like from the night splendour of those starry constellations? A sky where the vastness of God’s Milky Way can be seen in all its miraculous glory. No smoke from factories or other pollution to spoil the view.

Such a kaleidoscope is enough to trigger a seizure of vertigo. And no other landscape or skyscape could evoke such feelings of calm and awe. Back then in my Godless, misfit youth, the whole experience should’ve been nothing more than a Westworld robot gazing at the light of distant, uncreated nuclear fusion.

But I must’ve intuitively believed in a Divine Creator. How could such a wonderful sight be nothing more than a cosmic ocean of meaningless particles flowing endlessly into the abyss? When I occasionally watch The Misfits again on DVD, the meaningless of the characters’ lives and their mortality is laid bare in a bitter-sweet way that reminds me of my younger, naive self before I reverted back to God.

After the film was made, all the main protagonists died before the end of the Sixties. And a lot of traditional America died with them, culminating with the rampant drugs/sex climax of Woodstock and the stabbing to death of a fan during the infamous Rolling Stones concert at Altamont, a venue where Mick Jagger sang ‘Sympathy for the Devil.’

Now, at the dawn of 2021, the Devil couldn’t be happier. One could argue that the misfits of yesteryear have been replaced by a new generation of lost souls entering what could be the darkest night in human history. But fear not: “…Be strong and courageous. Do not be afraid; do not be discouraged, for the LORD your God will be with you wherever you go.” (Joshua 1:9)

PrevFrancis Brett Young: An Appreciation and a Reminiscence
Leonard GetzNext