Richard Strauss and the Survival of Western Culture 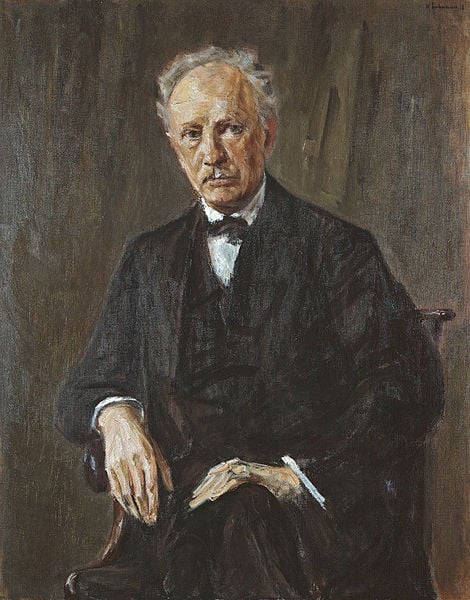 For a number of years I’ve greatly admired and enjoyed the music of the German composer Richard Strauss (1864-1949). In his early years prior to the First World War, he was considered forward-looking, even musically avant-garde. Indeed, the aged defender of the German classical tradition—and another favorite—Max Bruch (d. 1920), found Strauss’ compositions too advanced and straying from that tradition.

Yet Strauss was formed in the richly productive culture of southern Germany, Bavaria and the old Austro-Hungarian Empire, and, even if he experimented with harmony and vocal lines in his operas Salome (1905) and Elektra (1909), he never really departed from that early musical formation and an inspiration that he drew from his love of his native Bavaria and of imperial Vienna and the brilliant society that accompanied and informed it.[1] Son of noted musician and horn player in the Bavarian Court Opera Franz Strauss, from an early age, Richard received a thorough and complete musical education, demonstrating extraordinary talent in composition when only in his teens. By the late 1880s and 1890s, his symphonic tone poems, including Don Juan (1888), Death and Transfiguration (1889), and Also Sprach Zarathustra (1896) had established his fame throughout Europe and the United States. But it was later, in opera, that his eventual and permanent renown and preeminence would be secured.

In many ways as I listen to Strauss, I hear a great champion of Western culture, standing athwart the onrushing decline of Western music and art during the first half of the twentieth century.

Recently, I went back to listen in detail to several of Strauss’s vocal works. Re-hearing them, I reflected on their significance and resonance as our society sinks deeper into cultural decay.

Undoubtedly, Strauss’ most famous operatic work is Der Rosenkavalier (Dresden, 1911)—The Cavalier of the Rose. With a superb libretto by the great German dramatist and essayist, Hugo von Hofmannsthal, who shared Strauss’ conservative convictions[2], Der Rosenkavalier is a gloriously sentimental story of love and nobility, set in Vienna in the mid-18th century. Like some of Mozart’s stage works, it is essentially a comedy of manners, but one that pays deep and wistful honor to a bygone era and to a cultivated society that seemed to be disappearing even as Strauss was composing it. Indeed, through its comedic action runs, as well, a continuing, not so concealed sense of regret, a sense of loss of those customs, those standards and beliefs, those artistic traditions which made society worth fighting for.

The famous Act II waltz-sequence, with buffoonish character Baron Ochs dancing about, is justly famous. But even more so is the scintillating and wistful final scene, a trio, in which the Marschallin gives up her young lover Octavian to her rival Sophie, with both resignation and a special dignity that characterized the age.

The famous color film from the early 1960s with the legendary Elisabeth Schwarzkopf remains a remarkable work of art in itself.

Another Strauss work, the monumental mythical opera, Die Frau ohne Schatten [“The Wife without a Shadow”], premiered in Vienna in October 1919 right after the utter devastation of World War I (again with von Hofmannsthal the librettist): it could well be a musical metaphor for his very traditional view of marriage, and serve as an affirmation of life as a sacred gift from the Creator, as it is a passionate defense in music of childbirth and motherhood, and per extension, of the family. The story is a combination of fantasy and myth, with strongly symbolic elements that have much to say to our present-day society.

The main character, the Empress, is barren—symbolized by her lack of a shadow—and has every chance to seize a peasant woman’s shadow, thus enabling her to become fertile and have children. But coming to understand the sublime love that exists between the peasant woman and her husband Barak and the importance of children to them, she cannot bring herself to follow through with such an evil act, even when the life of her husband, the Emperor, depends on it. Fathoming this, she summons up moral courage and utters a refusal to take the peasant woman’s shadow: “Ich will nicht” (“I will not”). And because she now understands the importance of the unbreakable marital bond between husband and wife, and the significance of the procreative act and childbirth, miraculously, she too then is granted a shadow and the ability to bear children. The opera ends with a monumental chorus of children yet to be born and with both couples happily embracing. It is a moving story line.

In certain ways, it might serve as a musical emblem for the contemporary pro-life movement.

Strauss, with his full understanding of modern orchestration, was old-fashioned when it came to “tunefulness.” Like the Empress in Frau ohne Schatten, to the deconstructive tendencies of modernism in music, he too uttered: “Ich will nicht!” Strauss uses the full panoply of “modern” instrumentation and soaring melody to make a valiant stand for continuity and tradition in music. In a sense Strauss stood against the early 20th century “Vienna School” of dodecaphonic (“twelve tone”) music of Arnold Schoenberg, Alban Berg, and others, which seemed to over-intellectualize and cut off the artist and separate him from traditional sources of inspiration, while making his creations inaccessible to a vast majority of listeners.

In 1945, after viewing the horrible ruins of his beloved Munich, its famous National Theater opera house and so much more bombed into smithereens, an aged Strauss composed his deeply moving “Metamorphosen” for string ensemble. A meditation on both the insanely destructive power of war and a concomitant musical commentary on Europe’s apparent cultural suicide, “Metamorphosen” also, by its very title, suggests something more, something yet hopeful amid the ruins.  For a “metamorphosis” or re-birth, both cultural and spiritual, for Strauss was still possible, despite his own innate longing for a more civilized and decent age now gone.

Four years later, in 1949, Strauss composed his Vier Letze Lieder (“Four Last Songs”) only a few months before his death, and thirty years after the premiere of Die Frau ohne Schatten in Vienna. These four songs are a remarkable tribute not just to his late, autumn-like genius, but a final, glorious tribute to the incredibly vibrant and rich cultural milieu of late Imperial Habsburg Vienna and Wittelsbach Munich where his career flourished. To listen to these short songs is to hear a noble artist of great culture, achievement, and sophistication bidding good-bye to all that is grand and truly estimable in Western tradition.

In the fourth song, Im Abendrot—“In the Gloaming”—(a setting of a poem by Joseph von Eichendorff), Strauss consciously says farewell, not only to his own well-lived life, but also to the civilization with which he has had a passionate love-affair, but now is in steep decline.

The words of the song bespeak what Strauss observes in post-war Europe:

Around us the valleys fold up,

wistfully into the balmy sky.

so profound in this gloaming.

How tired we are of traveling –

Is this perchance death?

Yet even here in what seems a wistful good-bye to a great and noble culture lost, Strauss injects a quotation from his much earlier tone poem of sixty years past, Death and Transfiguration,  indicating that there is always a glimmer of hope for “transfiguration” and eventual renewal, if we strive for it—and if we have faith.

As in Die Frau ohne Schatten, the “Four Last Songs,” and in his operas Der Rosenkavalier and Arabella set in the glory days of Habsburg Vienna, Strauss evoked marvelously a past time of civility, high culture, and grace—a time in which the Christian faith annealed the culture, ironically reminding us in our barren age of just what we have thrown away and lost. And in so doing he joined the battle for our civilization and our future, a battle that continues and encompasses our cultural institutions and traditions, our art, our architecture, our film, our music, and so much more—integral elements that help shape and form us, and without which our lives are made barren and susceptible to disintegration and dissipation.

Too many times our contemporary society does not know how to compare and contrast the real achievements of our historic Western Christian civilization with the present cultural detritus that surrounds and threatens to inundate us.

Recall the great writer Hilaire Belloc’s statement about our civilization now surviving off the fumes of a once-great culture. Is this not where we are in 2019? Our challenge today is to preserve what is being lost, not only our precious faith under such severe assault, but the incomparable historic culture that it produced and in which it flourished. That task is multi-faceted and must encompass those noble and sublime accomplishments that form our true artistic legacy.  Strauss, despite his wistful celebration of a golden past, never lost hope for the future. Nor can we.

[1] There is a superb, two-hour BBC documentary, “Richard Strauss Remembered” (1984), narrated by Sir John Gielgud, with numerous rare photographs and historical film clips of Strauss, his performances and events in his life. Although never released formally on DVD, the private Encore label issued it, and it has been available through the Berkshire Record Outlet.

[2] ] Dr. Paul Gottfried has written perceptively on Hugo von Hofmannstahl and his traditionalist and aristocratic vision of Europe, a vision reflected in his dramas and other literary works:

“After the First World War, this literary giant [Hofmannstahl] devoted the remainder of his short life to reviving a popular interest in medieval Austrian culture. His most famous contribution to this effort is the German version of Everyman (Jedermann), which he brought to the stage at Salzburg and which became an annual production there. Despite his outspokenness as an Austrian patriot, Hoffmannsthal called for a “new European ego” in an address in Berne in 1916. The problem of cultural and social dissolution that the War had unleashed seemed to the distinguished author to have affected the entire continent; and in the interwar period, Hoffmannsthal contributed to Karl Anton von Rohan’s “Europäischer Revue,” a leading advocacy publication for European unity, a process that the editor Rohan, an Austrian nobleman, hoped to see take place according to traditionalist and presumably pro-Habsburg principles. In a speech in Munich in January 1927, Hofmannsthal famously called for a “conservative revolution” aimed at bringing back a true European identity. This speech was specifically critical of the Germans for “their productive anarchy as a people.” Hoffmannsthal contrasted the sentimental outpouring to which his German cousins were prone to a “binding principle of form,” which he thought necessary for the restoration of a Europe of nations. Unlike T.S. Eliot, Hofmannsthal wrote as a close friend of royalty as well as someone who was an aesthetic and cultural reactionary.” [Paul Gottfried, “Puritans or Habsburgs,” The Unz Review, May 8, 2007.]

________________________
Boyd D. Cathey was educated at the University of Virginia (MA, Thomas Jefferson Fellow) and the Universidad de Navarra, Pamplona, Spain (PhD, Richard M. Weaver Fellow). He is a former assistant to the late author, Dr. Russell Kirk, taught on the college level, and is retired State Registrar of the North Carolina State Archives. Has published widely and in various languages. He resides in North Carolina.