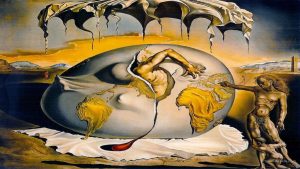 Geopoliticus Child Watching the Birth of the New Man by Salvador Dali, 1943

The telephone rang so he stopped reading the website’s content to answer it. “Hello?”

“Sylvester Sakamoto, get out! Now!” an unknown man’s voice urged him.

“They know what you’re doing! They’re on their way now to arrest you! Go!”

“But how? I’ve got multiple blockers on my computer!” he argued with the unknown caller, realizing at the same time he was being stupid.

“Get out! Now! You’re wasting time! Go!” This was followed by a <click> and nothing more was heard.

Sylvester sat in shock, with that cold feeling that suffuses a body when faced with unavoidable catastrophe. He thought he had been so careful, taken all the necessary precautions to avoid being traced by the government for reading samizdat, but he should have known better and now there was the devil to pay for visiting a website designated a source of “hate speech” and “misinformation.”

No specific websites were named as promoting “hate speech” and “misinformation.” You were simply expected to know the moment you came across one. And, truth to tell, it was not difficult at all: if it contained criticism of the government, if it mentioned certain ideological criminals in a positive light, if it described events and facts that all the propaganda outlets suppressed and, worst of all, if ridicule was being heaped upon either the policies, the government officials, or the fanatics, all of those constituted “hate speech.”

He was in shock, but then jumped out of his chair. How long did he have?

It all depended on traffic, of course. And what agency was on its way to arrest him, the Equity Police or the Federal Bureau of Inclusiveness? No matter.

Fortunately, he had long ago had the foresight to have a suitcase packed with what he deemed necessary to take with him should he decide to disappear, and disappear he now must do. It was in the closet by the front door. But now, he realized there was so much more that he should take with him. Knowing that it was foolish to waste time, but unable to prevent himself, in a flash he grabbed a backpack and rapidly stuffed it with food. Sylvester then took the suitcase and backpack to the garage and shoved them in his car. He also tossed in his tools. He ran back in, grabbed his chess set, his laptop computer, and a handful of books that he learned from the internet the liberals would burn at the first opportunity, returned to the garage, got in his car and backed out into the driveway.

Suppressing a strong urge to race out of the neighborhood, though his heart was pounding, he forced himself to drive in a calm manner in order not to attract the attention of any regular traffic cops.

The fugitive had long ago realized that by using his credit cards, his location would be tracked, so he stopped by the bank and withdrew his money.

The same was true of his cellphone, but he waited before disposing of it. The security cameras around his home were connected to his cellphone. Sure enough, he saw a squad car from the Equity Police drive up to his home and four EPs banged on his front door. When no one answered, they broke down the door.

He threw his cellphone out the window and drove off.

Driving to the nearby shopping mall, he parked among all the cars and thought for a while. He would need help, that much was certain.

Or . . . on the other hand . . . he could rent some kind of cabin out in the woods, in Arkansas or Tennessee. But that would take time, might take weeks, in fact, and where would he stay in the meantime? He could sleep in his car, of course, or buy a tent and join a homeless camp. Be a homeless person with a car? No, he would stand out. Besides, those homeless camps were filthy.

Sylvester finally decided on another option altogether. He got out of the car, went into the shopping mall and returned with a “burner” cellphone. He opened his suitcase and rummaged until he found a piece of paper with important information written on it. He dialed a number.

“Hello, is this the Guttenberg Book Repair Shop?”

“I have a book that needs repairing.”

There was another pause. “And have you done business with us in the past?”

“Yes. My name is Sylvester Sakamoto.”

“Checks out. There’s a diner at the intersection of Fairbanks and Walzem. One o’clock OK?”

“I’ll be wearing a solid red shirt. I don’t know what my partner’s going to wear. You?”

“I’ve got on,” he looked himself over, “brown jeans and a black shirt with brown and white stripes.”

An hour later, Sylvester entered the diner. As is often the case in diners, it was saturated with the smell of deep-fried food. He spotted two men in their 40s, sitting at the farthermost booth, one of them wearing the red shirt. His partner had a goatee. Sylvester walked up to them.

He nodded and was motioned to sit and join them.

They waste no time. Good.

“Bad. I got a call that the Equity Police or the FBI were on their way. I thought my computer and server had enough blockers so I could access the samizdat without being traced, but I was wrong. I grabbed my suitcase—I had it packed in advance, just in case—and soon after that I saw the EPs bust down my door.”

“How’d you see them? Were you nearby?” Jim frowned.

“No. I had my home security wired to my cellphone and saw them arrive.”

The pair stiffened. “You still have your cellphone on you?” Brandon asked in an alarmed tone.

“No. Threw it away. I called you with a ‘burner.’” The pair relaxed.

“All right, this is how things stand,” Jim got down to business. “Canada has usually been the destination of people who weren’t happy here, for one reason or another, but Canada’s in even worse shape than we are in. Mexico doesn’t have the political persecution that we have, but civil society has broken down with all the crime and the turf wars between the narcotrafficking gangs. An American going to Mexico won’t last long, even if you spoke fluent Spanish. I’m sure you know all this. Ah . . . you speak any foreign languages?”

“Too bad. Well, you may have to learn. Obviously, you can’t catch a commercial flight going anywhere. Their computers will alert the authorities. Fortunately, we have people who can smuggle you to the Bahamas or to Jamaica in their boat. They do it to help out; they just ask you to pay for the gas for their boats, if you’re able. Once in those countries, you can either stay, or catch a flight elsewhere. We recommend Ireland, Argentina, Uruguay, Singapore, or Philippines. We’ve had good success in the past with those countries.”

“Of course, once you get there,” Brandon interjected, “you’ll have to establish yourself. What do you do . . . uh-oh.” He looked past Sylvester with an apprehensive expression.

Sylvester turned around to see about eight hostile looking individuals who had entered the diner and were bearing down on them. The foremost flipped out a badge when he reached them.

“Equity Police. You’re all under arrest. Thank you, Mr. Sakamoto.”

Jim and Brandon turned their heads towards him with undisguised hatred.

“Oh, don’t blame him,” authority chuckled. “He didn’t know we were tracking him. We put a bug in his car before this started and, on top of that, we had a drone up in the sky, following him.”

Once again, Sylvester had that cold feeling seizing his body. Even so, he managed to ask in a weak voice, “You said . . . ‘before this started’?”

One of the other EPs spoke up. “Sylvester Sakamoto, get out! Now! They know what you’re doing! They’re on their way to arrest you!” He smiled maliciously while he spoke as Sylvester recognized the same voice that had initially called him and urged him to flee.

“We’re rounding up all of you white supremacists,” said the first EP who spoke. “Soon, there won’t be a single one of you Nazis left. Take them away!”

Armando Simón is the author of Very Peculiar Stories and The Book of Many Books.

PrevI Could Eat a Horse, or Would I?
Two PoemsNext