Shaked: Beauty and the Best 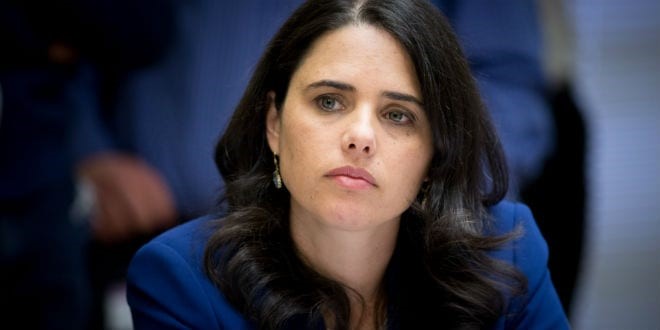 The cumulative wisdom of the masses will always be greater than that of the state’s experts, that the popular mechanisms will always be more flexible, faster, more responsive . . .  —Ayelet Shaked

Successful politics is often defined by one or a few great ideas; not necessarily policies or bills that become law, but ideas whose time has come, courageous stands that signal new vistas. To be sure, the tone of any society, any culture, is set at the top. Indeed, leadership in any democratic republic is a moral challenge. Getting elected is the easy part. Becoming a leader, one with vision or novel ideas requires moral courage, a rare commodity these days especially in smug and complacent European or American democracies.

So why start with beauty?

Surely, feminist scolds might dismiss appearance as a superficial, if not irrelevant, asset. Alas, looks matter at Prada, poker, and politics. In a viral age, your face may not be your entire fortune, but it’s a lot more than chopped liver. Appearance is recognition, a foot in the door—or maybe a better table at Chez Jays.

Looks matter, because beauty and aesthetics always matter. Call it God’s handicap. Saying that beauty only exists in the “eye of the beholder” is a little like saying that winning is a matter of opinion.

When it comes to women, beauty is an accord that predates written history. Ayelet Shaked is a comely example of aesthetics, indeed a cultural consensus.

In the vernacular; she’s a babe!

And then there are brains, or should we say fungible intelligence. Ayelet Ben Shaul is at once a product of Iraqi, Russian, and Romanian ancestors. She is also an issue of Tel Aviv University where she graduated as a software engineer. She was employed at Texas Instruments before she served two years as office director for Benjamin Netanyahu.

Since that apprenticeship, she has served twice in the Knesset and led at least three small right-of-center political parties. Her latest coalition, Yamina, picked up seven seats in the 2019 election.

After the 2015 election, Ms. Shaked was elevated to the cabinet as Justice Minister where she sought to rein in the power of the judiciary; like its American counterpart, shot through in Israel with statist or globalist lawyers.

In fact, it is inconceivable to me that a judicial body that bears no responsibility for filling the purse permits itself to empty it, but unfortunately, this is the situation in Israel today.

Though not a solicitor by inclination or training; Shaked is fond of lacing her arguments with the Torah, Locke, Hamilton, or Alexis de Tocqueville.

Ayn Rand is one of Ayelet’s literary favorites.

Brawn, as a rule, was not part of the modern feminine mystique until Israel came along. Today, women in Israel strap on their web gear, as men do, and go in harm’s way. Ayelet served in the Golani Brigade and the Special Forces element in that unit too. Her husband is an IAF fighter pilot. Israel lives on the edge, daily, in a very bad neighborhood where combat, if you must, is a family affair.

Israel’s enemies are legion and her friends are few. Women like Ayelet serve because she lives in a culture where, to mix metaphors, it’s “over the top” when the balloon goes up.

Necessity is ever the mother of military convention.

Khaki, however, is not just a fashion statement for the women of Israel. If we can risk another expired metaphor, Ayelet is an exemplar, one tough broad.

Some say that Shaked is Golda Meir tough.

Physical brawn is a given for soldiers. Intellectual courage is another matter altogether. The former Justice Minister of Israel has both.

Shaked’s worldview is seasoned by the wisdom of crowds. In true democratic republics, she believes that eventually a well-informed public gets it right. She has no illusions about Israel’s enemies either, Islam or Islamism.

Behind every terrorist stand dozens of men and women, without whom he could not engage in terrorism. They are all enemy combatants, and their blood shall be on all their heads. Now this also includes the mothers of the martyrs, who send them to hell with flowers and kisses. They should follow their sons, nothing would be more just. They should go, as should the physical homes in which they raised the snakes. Otherwise, more little snakes will be raised there.

Most politicians in the West insist on parsing terrorism and jihad from mainstream Shites or Sunnis. Shaked seldom engages in such dangerous fantasies.

Ayelet seems to know that as long as the Sunni and Shia clerics are obsessed with their centuries old internecine religious quarrel, the apostate jihad has all the earmarks of a nuclear suicide pact.  In short, Islam needs better ethnic and national role models, some interpretation of Mohamedism superior to the poison pill pair, Persian or Arab theocrats.

Shaked is one of few politicians of global stature who supports the recognition of Kurdistan, surely the most enlightened and tolerant Islamic demographic in the world. The Kurds may be the largest ethnic group in the world without a recognized nation state. At the very least, the Kurds provide a moderate alternative to Shite and Sunni extremists in the volatile Levant.

Turkey may have to be thrown under the bus to make Kurdistan possible. Alas, the Turks are another unreliable, if not toxic, Sunni edition of Islam where religious nutters poison the well. Nikki Haley, former US ambassador to the UN, says that “Turkey is not our friend.”

As of this writing, Donald Trump just endorsed, green lighted, the ongoing Turkish invasion of Syrian Kurdistan. If he really serious about ending the endless parade of small wars, he might think about Afghanistan first.

The Kurds did most of the heavy lifting in the recent ISIS campaign. Shaked suggests that it’s time to reward a variety of Muslim culture that the rest of the world can live with. Indeed, if push comes to shove in the Levant, only Israel and Kurdistan are worthy of American blood and treasure.

Closer to her home, Ayelet Shaked’s take on the “two state solution” is another illustration of moxie. Not to put words in her mouth, but watching the Mideast “peace” process over the years is a little like watching an elephant trying to give birth to a mouse.

Given their behavior since WWII, calling some Muslim polities “civilization” requires more imagination than insight. In another day, Vince Lombardi used to say that “football isn’t a contact sport. It’s a collision sport.” The same might be said of all that “politics by other means” in the Mideast.

With whom do you negotiate for “peace” in Palestine; the Islamic Jihad, the PA, or Hamas? These sierra hotels can’t talk with each other no less Israel.

And if you pulsed Israeli Palestinians, few or no Arabs would relinquish their Israeli passport or move to a terror sanctuary. Why then risk the obvious hazards of legitimizing another haven for anti-Semites right on Israel’s border?

It’s a safe bet that most Israelis, Ayelet Shaked included, believe that when it comes to a Palestinian state, doing nothing is the enlightened option. Nevertheless, Americans and Europeans persist in the two-state pipe dream.

How is it a good idea to create a Palestinian terror state with one hand whilst throwing Kusdistan to the Turkish Islamist wolves with the other hand?

American appeasement of Islam, Islamism, Islamofascism, and Islamic terror is conditioned by numbers and 9/11. One and a half billion Muslims is a big number, apparently giving NATO and the EU a chronic case of numerophobia. What Islam could not do by conquest in Europe is now made possible by open borders, immigrant tsunamis, “refugee” rackets, Turkish blackmail, and Muslim birth rates.

Slow motion submission in the free world is punctuated by kinetics too.

The Arab sneak attack against New York City and the Pentagon has morphed into indefinite fear and fumbling. Unctuous commemorations of 9/11 now avoid any mention of the perpetrators; the race, religion, tribe, or nationality of the culprits as if motives and affiliations do not matter. Seamless with Muslim propaganda, Americans now seem to think that the New York/Pentagon massacres were one offs—or some kind of deus ex machina.

“Some people did something,” referring to 911, says one vapid Muslim congresswoman from Minnesota.

Alas, whistling in the dark is an indulgence that Israel or the free world cannot afford. If nothing else, pragmatic patriots like Ayelet Shaked will help to keep Israel safely anchored in reality.

We are living through a bit of history that may yet define America and Israel as democracies.