Skewed Projection in a Broken Mirror 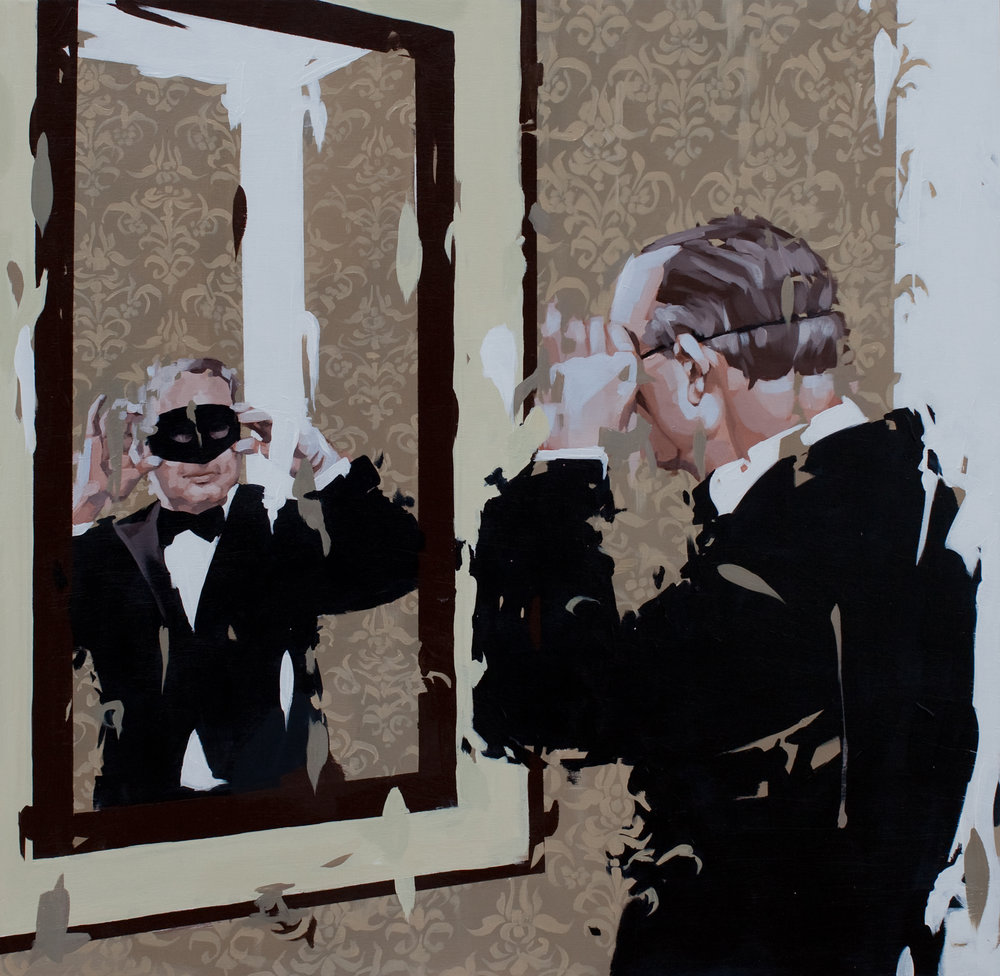 If Donald Trump, the ghosts of Socrates and Sigmund Freud walked into a bar, they’d unlikely discuss the psychological Theory of Projection. Instead, they’d probably talk about building a wall, the Oedipus complex, and the dangers of drinking hemlock.

In the circles of psychoanalysis, the term Projection, or blame-shifting, is a theory in which some people defend themselves against their own unconscious impulses or qualities (both positive and negative) by denying their existence in themselves while attributing them to others. And these three men, along with many other famous and non-famous people, had to deal with Projection in their lives. And it can manifest itself in many forms, such as denial (cognitive dissonance), regression, dissociation, reaction formation, compartmentalization, etc.

It’s quite possible that the deeply flawed Freud, who allegedly fell in love with his sister-in-law, unwittingly projected his sexual fantasies onto mankind in the mother-of-all autobiographies: his popular body of writings.

As for Trump: most of his flaws are also reflected in the traits of his many foes and fans, as we’re all flawed in some way or other. Then there’s Socrates: Monty Python’s Philosophers’ Football Match sketch had him played by Eric Idle. But the great muse was far from being idle when the dikasts of Athens probably projected their own intellectually flawed traits on him accusing him of impiety against the gods of Athens and corrupting the youth. His punishment was death by drinking a beverage of the poisonous hemlock.

Projection can also be seen in characters in literature or even TV sitcoms. In the hugely successful British TV comedy series of the 1970s, Fawlty Towers, the main character, Basil, plays the middle-aged owner/manager of a hotel where he regularly insults his guests, occasionally projecting his own flaws and weakness onto some of them. In one episode, The Waldorf Salad, a rude Basil mocks a couple of guests who tell his wife they love reading the books of Harold Robbins. She tells the couple: “But seriously, though, his men are all so interesting. Ruthless and sexy and powerful.”

To which Basil replies: “Who’s this then, dear? Proust? E.M. Forster—Harold Robbins. Oh, yes, of course. My wife likes Harold Robbins . . . Have you ever read any? It really is the most awful American, well, not American, Transatlantic tripe. A sort of pornographic muzak.” However, Basil, in another episode can be seen in bed reading the thriller Jaws. Similarly, in Sinclair Lewis’s Elmer Gantry, the fake Christian evangelist of the title is a classic “do-as-I-say, not-as-I-do” narcissist of Projection.

And let’s not forget the “tolerant” Social Justice Warriors who anonymously hide behind their keyboards. Some of these extremely intolerant people project their intolerance while they accuse tolerant people, whom they don’t like, of intolerance. The apologetics speaker/author Frank Turek, said: “Tolerance is passive; it means I’ll stop caring and loving. Love is active: it means I’ll tell you the truth even if you won’t like me for it.”

But it’s not just with tolerance where some people have double standards. In his book, Do as I Say (Not as I Do), Peter Schweizer discovers how members of the “liberal-left” [illiberal cosmopolitan authoritarians] exude an air of moral certitude, priding themselves on being selflessly committed to the highest ideals and seem particularly confident of the purity of their motives and the evil nature of their opponents.

What he found was many contradictions: contemporary liberalism in the end forces its adherents to become hypocrites. They adopt one pose in public, but when it comes to what matters most in their own lives—their property, their privacy, and their children—they jettison their liberal principles and embrace conservative ones. In other words, they have mastered Projection when accusing others of what they in fact act out.

Freud, who projected many of his own flaws on rival psychiatrist Carl Jung, visa versa, considered that, in Projection, thoughts, motivations, desires, and feelings that cannot be accepted as one’s own are dealt with by being placed in the outside world and attributed to someone else. What the ego repudiates is split off and placed in another. However, his rival, Jung, wrote: “All projections provoke counter-projection when the object is unconscious of the quality projected upon it by the subject.”

For example, a person or a group with aggressive behaviour may constantly accuse other people of being aggressive. No more abundantly was this expressed better than during The Donald Trump presidency campaign and the hysteria that followed. Here we had anti-Trumpers acting deplorably, vilifying other “deplorables” for exercising their democratic voting rights.

Trump was also vilified and called “disgusting” for joking remarks he made to another man many years ago about inappropriately “grabbing” a part of a woman’s anatomy. The remarks were vulgar and disrespectful. However, the singer Madonna, whose performances are infused with lewd, simulated sex acts, was outraged at Trump’s men’s locker-room-talk vulgarity.

During the presidential campaign, she appeared at Madison Square Garden and addressed a huge crowd (mostly women) wearing p***y hats; some of them dressed in “vagina costumes,” while their young children looked-on confused. Madonna said: “If you vote for Hillary Clinton, I will give you a b**w job. And I’m good. I’m good. I’m not a douche and I’m not a tool. I take my time, I have a lot of eye contact, yeah. And I do swallow.”

In an essay in American Thinker magazine, David Zukerman wrote: “The left’s First Rule of Hypocrisy requires that the very public display of very coarse language by a leftist generally gets ignored.”

But it’s not just Madonna and a whole army of Trump-hating celebrities with the most appalling, vulgar traits, who exercise their Projection on Trump. Two former presidents also got in the act. After Trump came to power, the Daily Mail had a headline which read: “Bush and Clinton lecture Trump: Ex-presidents hit out at Donald with veiled jabs about ‘humility’ and ‘arrogance’ . . . ” Surely this was the day that satire died. The Mail continued: “Although neither mentioned Trump directly, many in the crowd of about 300 people at the George W. Bush Presidential Library took [it] to be references to the current president.”

After Trump was elected, on the cover of the leftist US version of The Week magazine, a classic Projection cartoon depicted crowds of “deranged” Trump supporters holding up lighted torches screaming for Hillary Clinton’s imprisonment and T-shirts with the words, “Build That Wall!”

Meanwhile, violent fascist Antifa rioters were on the streets torching dozens of cars (so much for the environment), smashing store windows, physically attacking Trump supporters, and assaulting police horses. The actor James Woods tweeted: “The nails in the ends of their weapons are for stabbing police horses as well as anybody they remotely disagree with.” On Fox News, an Antifa member said even the police horses are racists.

Spiked editor, Brendan O’Neill, says that being anti-fascist means destroying historic monuments, censoring people you don’t like, starting fires on campuses to prevent people from speaking, calling for certain books, protests and flags to be outlawed and referring to everybody by race.

One Antifa protester was freely shouting, “Ban free speech!” The Soviet Russian Gulag prisoner, Alexander Solzhenitsyn, said: “Violence can only be concealed by a lie, and the lie can only be maintained by violence.”

The American writer/documentary maker Dinesh D’Souza has recently written a book about leftist lies. He wonders: “Why is it that anti-fascist [Antifa] mobs always engage in the very behavior they are supposedly protesting — fascism?” In his book, The Big Lie (Exposing the Nazi Roots of the Left), D’Souza writes how the Left is attempting to transfer (Projection) blame to us for their crimes. He says: “The American Left’s thuggery, censorship and intimidation tactics are part of a deliberate effort to subvert the democratic process just as Hitler and Mussolini did.”

D’Souza exposes how the progressives* and Democrats were the party of slavery, segregation and eugenics, but projected those sins onto conservatives when such vile ideologies became unpopular. (*Progressive can mean something that is advantageous or progressive for a group or species. Woodworm are progressive in devouring beautiful, antique furniture; similarly, the KKK progress what they think is best for them, as did Mao, Hitler and Pol Pot). American Thinker writer Greg Richards says: “Antifa is the new model of the KKK”.

Read more in New English Review:
• Days and Work (Part One)
• The Insidious Bond Between Political Correctness and Intolerance
• Twentieth Century Architecture as a Cult

But Projection is not all confined to politics, the Public Square, academia or social media or aggressive misfits. Sports also has its fair share of it. A good example was the success of the Leeds United soccer team of the late-1960s/early ’70s. Here we had one of the greatest teams in British football history being accused of “dirty play” by many rivals who ignored similar “dirty play” of their own teams’ players. Leeds United were no angles and were no stranger to fouling other players, but the same could be said for many of the other teams they played against and who called “foul!”

Projection or hypocrisy, call it what you will, go way back to ancient Greece and beyond. Did the prominent Athenians who condemned Socrates project many of their own corrupted views on the youth of Athens? And while Socrates might have accused these elders of ignorance, he was also aware of his own ignorance on certain topics.

From Trump’s America, Freud’s psychobabble, Leeds United and ancient Greece, we all at some time during our lives have been guilty and on the receiving end of Projection in the form of hypocrisy. However, there was only one person who wasn’t: Jesus of Nazareth. When the comedian actors of Monty Python were researching before writing the script for The Life of Brian, they realized it was difficult to mock Jesus, especially his ideals on the Sermon on the Mount. Instead they created the “Brian” character and mocked people blindly following organized religion. (Please see: Chapman, Graham; Cleese, John; Gilliam, Terry; Idle, Eric; et al., The Pythons Autobiography by The Pythons, 2003.) However, such imagery and humour would only be appreciated by a minority, intellectual audience, but for the emotionally driven Great Unwashed, where perception is everything, it certainly looked like lampooning Christianity and mocking Jesus.

PrevThe Revolution of Evolution
Twentieth-Century Architecture as a CultNext