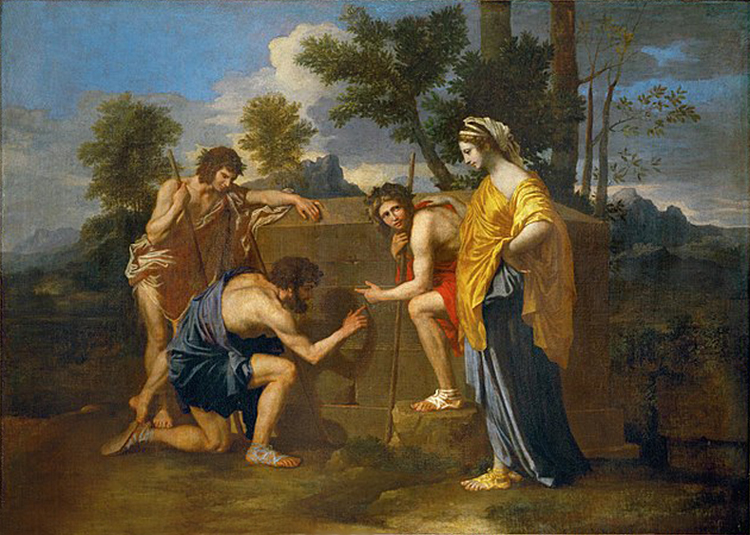 Our words “Sphinx” and “sphincter” together go
back to the Greek sfingo (σφῐ́γγω), which means—
perhaps pre–Indo-European lingo,
historians surmise—“bind fast or tight.”
Those old Pelasgians surely had it right:
Sphinx is no eschatological hill of beans!

while the urethral sphincters are twin stops
pissing—and the inner, should such befall,
men’s retrograde ejaculation blocks).
Praise too the muscle pubococcygeus,
for which the sole adequate rhyme is “Zeus”
as anthropic cosmological principal.

[A brief caesura now in this refrain
for Percy’s pointing at the porcelain.]

Trick cyclists[2] invoke sphincters of the mind
as well, noting their crafty work in dreams.
They make us nice, ambitious–and unkind,
replay our fondest memories as screams,
and may employ sciatica to distract
the boss—as Dr. Sarno, NYU, so cleverly unpacked.

The blood-brain barrier, too, binds
tight, denying pathogens a route to flood
neurons and contiguous astrocytes
with mad monsoons of blocking mental mud.
Sphincters operate to make sure that stuff,
whatever medulla oblongata’s blind bluff,

travels to where it should, and in good time.[3]
And when they one day don’t, no need for blame,
it’s fitting, when at last we’ve had enough
that they resign their corporeal tasks, fall
where they may the mortal drips. We’re all
unsphinctered at that point, set free from toes to brain.

*
So does Sphinx, “the Strangler,” as the ancients
dubbed it, whom Giza’s kitty on her plinth
recalls, bind too, minding the gap—maybe
the sphincter to some thither, cosmic sea,
in due course speeding to eternity
the “bare seed” on which Saint Paul pronounced at Corinth?[4]

__________________________
[1] Some shepherds examine the inscription on the tombstone of the mythological Daphnis (Δάφνις, from δάφνη, daphnē, bay laurel), inventor of pastoral poetry. “I too [was once] in Arcadia [like you],” they read. The woman watching them may be Melpoménē, muse of tragedy, daughter of Zeus and Mnemosynē (Memory).
[2] I.e, psychiatrists—World War II British Empire military slang.
[3] Purushamriga (the “human beast”), the Hindu Sphinx, travels at the speed of thought. See https://www.sanskritimagazine.com/indian-religions/hinduism/sphinx-in-the-vedas
[4] “And as for what you sow, you do not sow the body that is to be but a bare seed [γυμνὸν κόκκον].”—1 Cor. 15:37