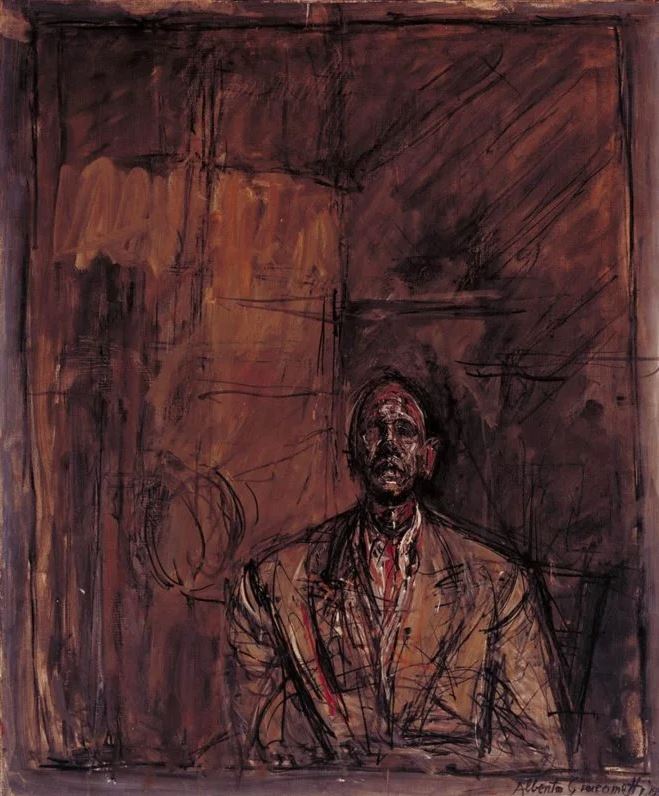 In “Twentieth-Century Nihilism,” Wyndham Lewis makes the poignant observation that in the machine age, a time that squeezes human freedom from individuals and re-distributes it to the State, politically savvy people should only surrender to the machines that leave their original self least disturbed or mutilated.

While the aforementioned is the best route for personal salvation in a totalitarian age that is abetted by the State’s collusion with social media corporations, it is nonetheless a luxury that few people can afford.

This tragic predicament forces man to choose those machines “whose standard shapes” offer us the best chance to survive the onslaught of nihilism.[1]

Stripping man of the possibility for transcendence, postmodern totalitarianism instead drives the self into the frenzy of everyday banality. Yet, not the old forms of banality that people have embraced since time immemorial. Rather, abrasive and stylized forms that deface human reality, and which cannot be separated from social-political engineering.

Postmodern banality is billed by the smart-set as the only way of life for generations of people who have grown to maturity without the slightest knowledge of prudence, which a well-grounded life demand.

According to the smart-set—who are the denizens of crass reductionist philosophical materialism—the alternative to wasting one’s life embracing life-affirming transcendence is to delve headlong into the morass of everyday living, the caveat being that the “world” needs our undivided attention and energy today more than ever.

The good life, we are preached to, does not and cannot be allowed to exist. Instead, we must promote forms of collectivism that not only embrace the futility of individual existence, but that through its negation, can the species ultimately progress.

Individualism, the Scourge of Collectivism

Postmodern man has been cut off from the possibility of self-reflection, the source of self-rule that keeps us from becoming slaves in our cavernous world of nihilism.

Frightened by the idea of self-rule, a form of noble stoicism that has informed the life of thoughtful people for millennia, the moral Lilliputians who rule our world today force man to take refuge in collective self-loathing.

While it remains true that postmodern man has been gutted, much like a hapless fish in a fish market, the entrails that have been removed from man are akin to existential longing and aspiration. The cleansing of postmodern man aims to make individuality the stuff of a bygone era.

The smart-set would have us believe that pointless individualism must be abandoned as a relic of what they consider to be an infrahuman world. Discarding the individual as the basic unit of human society means opening up the world to forms of collectivism that will ultimately deliver, not man, for that odious entity must no longer play a role in human affairs, but the species to untold biological and technocratic control. That is the vision of our current breed of social-engineers.

Linear progress is uncritically billed as the unlimited expansion of man’s moral energy, which is best harnessed when diffused into the collective. Boundless and unencumbered by the burden of free will, the collective is coerced into embracing the abundant fruits of unhinged morality; the bringer of savage gratification.

As a consequence, postmodern man’s capacity for transcendence is rapidly waning, along with man’s imagination; the latter’s incapacity to cultivate myth-making and the sensibility for comedy and tragedy.

Albert Camus picked up on this aspect of nihilism in his inspired essay “Helen’s Exile,” where he writes: “Nemesis, the goddess of moderation, not of vengeance, is watching. She chastises, ruthlessly, all those who go beyond the limit.”[2]

Curiously, as if the loss of transcendence isn’t’ a grave enough predicament for man during any epoch, postmodern man has also lost the ability to reason, and the respect for reason that native rational ability demands.

Emile Chartier’s (Alain, 1868-1951), The Gods, is a reminder of the shallow security that nihilism offers postmodern man through bloated scientism.

Our secular age finds it imperative to create gods that serve the purpose of postmodern nihilism. This means a deliberative effort to create timely gods that safeguard postmodern man’s inversion of nature, and the fangled values that correspond to this inversion.

The creation of secular gods is essential in re-distributing man’s vital and imaginative energy, which postmodern nihilism has no use for, into self-serving channels of its own making. The emptying of man’s vital imagination is the most precise definition of nihilism, for the war against nature discredits the very moral abstractions that nihilism promotes.

Nihilists confuse the appearance of security with genuine security. Postmodern man embraces the belief, not knowledge, that if “scientism tells me that I am, therefore I am.”

Nihilism takes for granted security and comfort in a world of straight pillars, running potable water and the influence of practical geometry. The achievements of Western civilization confuse the postmodern psyche, like a ghostly specter from another time and dimension. Nihilism is intimidated by this specter, for genuine security demands toil.

What is at stake in the world of people who prop up scientism as a religion is their shaky security of life as rote instead of vital existence.

Postmodernity knows nothing of vital existence, and as a result eschews its possibility with animated contempt. Rote disguised as security? Few postmodern people even suspect the latter as being an ominous house of cards.

Alain’s essay “Labor” serves as a necessary refresher course that reminds postmodern man that human creation is the result of intense labor. Nothing comes easy to people who keep the score. Here, labor is meant to signify toil and strife, and does not admit of the tortured, social-political connotation that the smart-set peddles as a social-political category.

The scale that balances labor and its attendant fruits is a delicate one, for what can take a herculean effort to achieve is wiped out or forgotten with little ado.

Time and forgetfulness exert great violence and injustice over the hierarchy of values. This leaves the lazy beneficiaries of the fruits of labor with the false impression that the comfortable status quo they enjoy is somehow a natural occurrence, a miracle conjured up by the people behind the scenes at the chamber of commerce.

The Castration of Common Speech

One of the profound offenses of nihilism is its censorship and castration of common speech. It is common speech that filters the findings of common sense through the lens of good will.

The sounds, shapes, angles and smells of nature ground the life of the spirit, as this is manifested in differentiated persons. Vigilant not to swallow the poisonous pill of radical ideology, common speech pushes back against the tide of abstraction; social-political and alleged moral-cultural progress.

In a nihilistic age, when nihilism has morphed from abstract theory—the plaything of dwellers of the seminar room—into a religion of the here-and-now, man becomes incapable of interpreting the blatant truths that seeing and hearing convey. This is one of the crimes committed by nihilism against nature.

Nihilistic man does not cower to reason or science. Social-political engineers who use reason and science as fodder for the creation of convenient public policy are professional liars.

The truth is that, circa 2021, the smart-set deems reason and science unsustainable cultural constructs that impede the ends of totalitarian social-political engineering.

Postmodern man realizes that nihilism has a physique, not a mind, but a body that must be sculpted to our conception of what hedonism means for a sensual age. A sensual age that negates all manner of guiding first principles is an insipid age.