Sweden. The Silence of God. 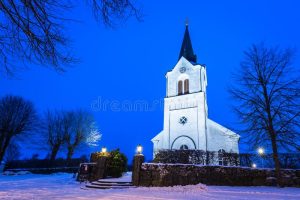 I am living for a month in a small island in Sweden called Björkö, or Björkö-Arholma, as part of an artist-in-residence program. The island is located in an archipelago two hours away from Stockholm and it seems to be popular during the summer. Now in winter, however, there’s almost no one around.

I attended a service at the small local church last Sunday. I don’t go so often to church these days, and in fact, I hadn’t attended mass in more than a year, but today the local small church, which is almost next door, announced through a sign that it was open and there would be a service (I was raised Catholic, but this is a Protestant church and I don’t think they call it “mass”). So I went.

In the end, I was the only person there. Besides the pastor, the organist, and the two church assistants (one male, one female), there was no one else. I don’t know if it was because of Covid, because there are not many people here in Winter anyway, or simply because people in general do not go to church so often anymore — but there was really no one else.

So it was basically a private service, just for me. It reminded me of the end of Bergman’s movie “Winter Light”, which features the pastor giving a sermon to an empty church, perhaps a somewhat similar church to the one here.

I can’t speak about the sermon, but the music was very beautiful — in fact, there was more music than anything else, as the sermon itself and the readings were quite short. Some of the music was played on the organ upstairs, some on the piano next to the altar, and all hymns were sung by the organist together with the assistants. Usually, they are also sung by the people attending, but today it was just me and I can’t speak or understand Swedish. Also, I can’t really sing. But Swedish religious hymns are quite beautiful; I remember having a CD of traditional Swedish hymns once.

Protestant churches don’t have the Eucharist or Holy Communion, which is strange for me; it feels like a breakfast without coffee, or like a meal without its main course, if you pardon the bad analogy. Still, it was an interesting experience.

After it ended, I talked a little while to the priest and the church assistant; they were very kind and explained that in summer things are a bit more lively; in winter they offer services only occasionally, not even every Sunday. They also explained to me the origins of the colourful painting on the ceiling, which represents a ship captain guiding his ship during a storm, some fishermen watching on the shore, and Jesus Christ hovering over the ship or perhaps walking on the water.

The church was built in 1905 or 1906, but the painting was made in 1950, using local people as models for the characters. The church assistant told me that once, in a summer a few years ago, as they were ending the celebration of the service, an old man came up to the altar and said, “I am Jesus!” Everybody attending looked at him with alarm, thinking of course that he was a lunatic. But the old man then explained that he was actually the original model for the “Jesus” in the painting.

Another interesting thing in this church is a very detailed “votive ship”: a miniature model ship hanging from the ceiling. This type of decoration is very common in Scandinavian churches, a reminder of their long history of seafaring. Many women would come to the church to pray for their husbands who were sailors or fishermen, so that they did not perish in shipwrecks and came safely back home.

I don’t know about the particular model ship present in this church, but traditionally they were created by ship builders or by sailors and donated to the churches as a gift.

While there are not many people during the winter in this island, and religious attendance in Europe has been decreasing for many years, I suppose Covid has not helped church attendance very much… In many European countries now, due to the current governmental rules, many churches are required to ask for a test or a “vaccine passport” to all congregants, as well as the use of masks during mass. In many ways, it is a pity. Faith is of course a question of personal belief, and church mass or service is not necessarily needed for that, but I think the role churches used to play, especially in smaller communities like the one here, was really being an active part in the life of local people celebrating their most important events: baptisms, weddings, funerals. Churches were really a place for socialization, for community building.

As people retreat more and more indoors or in front of computer screens, this social role is increasingly disappearing, and with Covid, it might even disappear completely.

______________________
T.E. Creus is the author of Our Pets and Us: The Evolution of Our Relationship and he is currently writing a travel report from Sweden at contrarium.substack.com.