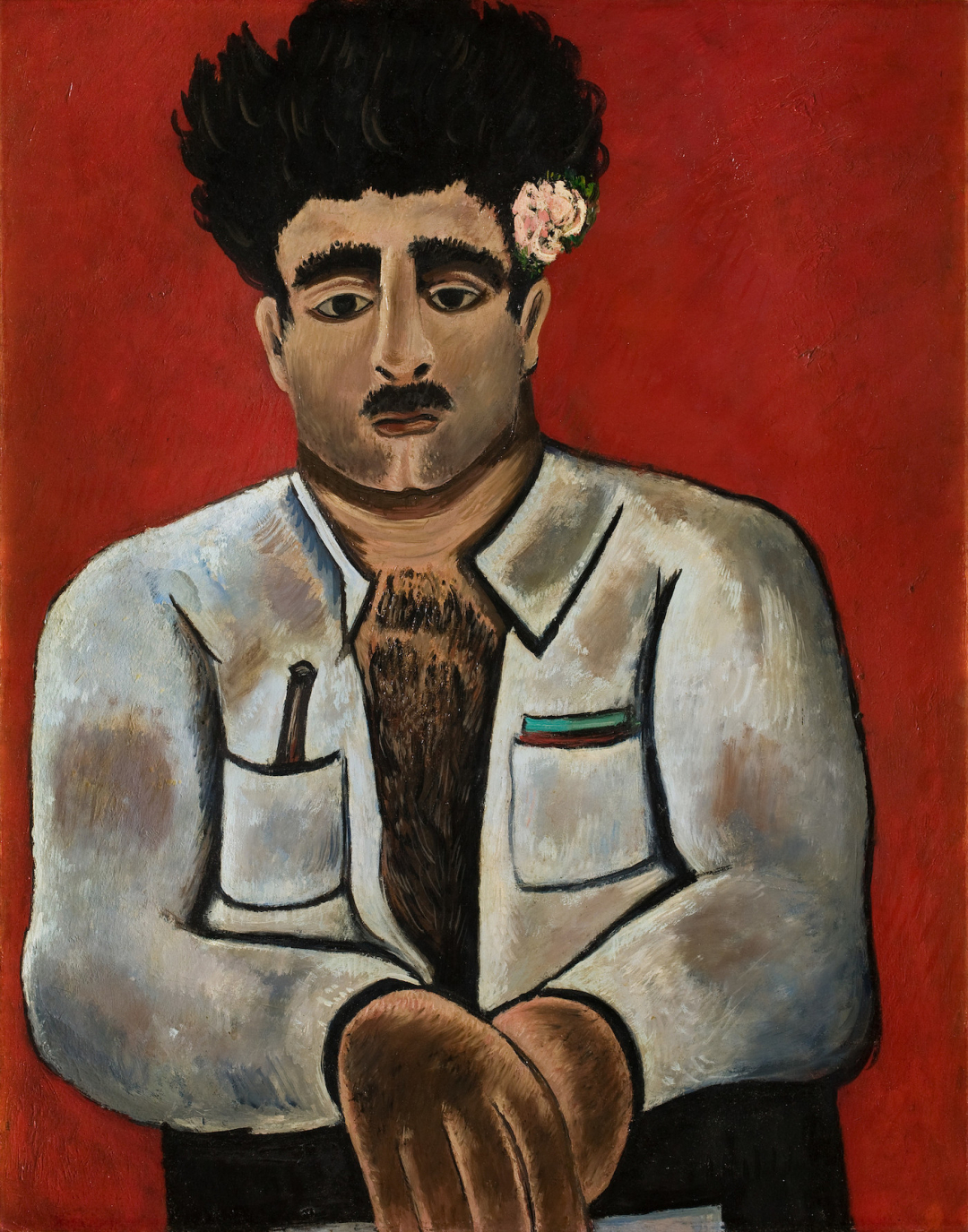 Adelard the Drowned, Master of the ‘Phantom’, Marsden Hartley, 1938–39

Allow me to make this confession for those who may not understand where I’m coming from. My stomach becomes queasy every time that I’m around danger-averse “cultural conservatives.” I judge conservatives by their willingness to take on hard questions in a way that may cause them to take hits. Further, I suspect that those who confine their “conservative views” to innocuous matters are being deliberately evasive. I am above all annoyed by endless babble about “permanent things” by those who don’t want to stick their necks out on such delicate subjects as transgendered restrooms, gay marriage and immigration. Such authors and commentators are working hard to build conservative reputations on the cheap.

Mind you I am not against conservatives telling us about such arcane matters as references made by a particular thinker to the theology of Flannery O’Connor or about how many times that week someone attended a Latin Mass. For the record, I have written several books on the history of the conservative movement, and I am as willing as the next fellow to learn more about a subject that I have researched for decades. What I’m talking about are vague appeals to the past combined with testimonials to one’s religious orthodoxy as a substitute for telling us where one stands on burning social issues. Sometimes I find even tributes to the past a bit suspect, for example when the writer exaggerates the progressiveness of the views attributed to a safely dead subject.

I am therefore enormously impressed by an author who does exactly what a principled conservative is supposed to do—that is, present a well-argued position on a controversial question. That person in this case is Robert R. Reilly, the author of Making Gay Okay: How Rationalizing Homosexual Behavior is Changing Everything (Ignatius Press, 2015). A man of variegated talents, who has written inter alia a study of classical music, Reilly has also worked for the Secretary of Defense and once directed the Voice of America. On the gay issue, he pulls no punches in examining the power and PR campaigns launched by the gay lobby. He explains how in a period of about twenty years same-sex marriage went from being a weird, off-putting idea for most Americans to an honored, constitutionally protected institution in the US. We might also note that largely under American cultural influence the change that Reilly documents has occurred in every Western country. This has happened to the extent that countries that do not feature a wide assortment of special programs and legal protections for gays, lesbians and (now) transgendered are depicted as brutal reactionary places. In this process the American media, including soi-disant conservatives, have led the way.

Read more in New English Review:
• Excellence Rejected
• Much More than a Trade War in China
• Spinoza and Friends

I wish I could say that I was shocked but I most certainly was not when the New York Post extolled the Muslim mayor of London for working overtime to accommodate the LGBT lobby. This Muslim mayor, Sadiq Khan, is held up as a model of good judgment for the less enlightened Rep. Ilhan Omar of Minnesota (God save us from both!), who apparently has offended LGBT activists as well as Zionists. Please note that the Post is an integral part of the Murdoch press empire, and its writers and editors hold an honored place at the table of Conservatism, Inc. The impression that a reader might easily take away from this egregious but for the culturally left-leaning Post hardly unusual advocacy piece, by a professed “atheist Muslim,” is that serving the LGBT lobby is essential to American conservatism. It is no longer unusual to hear Martha MacCallum or Bret Baier on Fox-news announce that one of their associates is a proud gay who adores the GOP or a proud gay about to marry another gay. Gayness and transgenderism seem to have joined other good things in the value package of media conservatives.

Reilly exhaustively details the conversionary efforts engaged in by those “rationalizing” and ultimately glorifying homosexual behavior and the efforts made by the educational establishment, the media, Hollywood and bullying pressure groups to normalize what had previously been regarded as aberrant sexual practices. He also doesn’t hold back in listing the pathologies connected to gay activities and the connection of these activities (which the media has deftly hidden) to pedophilia. Gay advocacy groups state openly that “attracting young people” represents the “next stage of the movement,” and Reilly shows why presidential candidate Clinton was inventing her own truth when she denied that “gays recruit others to become gays.”

Finally Reilly shreds the reasoning of Justice Kennedy in the Obergefell v. Hodges Supreme Court decision in 2015, which legalized homosexual marriage for the entire country. Not only, according to Reilly, did the majority read some wild things into the Fourteenth Amendment in order to render their majority decision, they also had to revise drastically the only meaning for the institution of marriage that had existed in the world up until a few years ago. The court would also insist that how it described the union of two gays is the way every citizen in the US would be required to speak of this arrangement in the future, under pain of being punished as a lawbreaker. In a dissent, Justice Alito correctly predicted that the majority decision “will be used to vilify Americans who are unwilling to assent to the new orthodoxy.” Just ask the criminalized and financially ruined Christian baker in Colorado about “non-traditional marriage” and about what happened to his business after he refused to make a cake for a gay wedding.

Reilly is also on target when he observes that Kennedy and other justices who found a mandate for gay marriage in the Fourteenth Amendment that nobody before had noticed were treating the Constitution as “psychological therapy.” The Constitution had to yield a justification for gay marriage; otherwise those who sought such a legalized relationship would be “impermissibly disparaged” and made to suffer “pain and humiliation.” By the same reasoning the Constitution should permit someone to marry his grandson or his mother (perhaps both) lest that person be made to feel “impermissibly disparaged.” Why should the Supreme Court, moreover, limit its therapy to gay unions or to the union of just two people? Why shouldn’t it allow more than just two humans to be legally married to each other, if that arrangement causes the recipients of this judicial favor to feel less “demeaned”? At that point we’ll have to arrest Christian bakers as criminals for not plying their trade for group weddings.

Reilly makes an observation in his Afterword that deserves to be quoted in full: “Those who think that the homosexual movement will relax its militancy because it seems to have achieved its principal objective are very much mistaken. The inner dynamic of the ‘rationalization’ process necessitates the most aggressive application of the new civil right of homosexual ’marriage.’ One must keep in mind that the ultimate objective was never same sex marriage but the absolute security of the rationalization for homosexual behave, which can be attained only with the enforcement of its universalization.” Reilly’s statement of what the gay lobby wants, which is universal compliance with its sexual preference and the steady, resounding affirmation of its life choice, is entirely correct, judging by the behavior of its advocates and the manner in which they and the administrative state treat dissenters.

Read more in New English Review:
• The Strains of a Nation
• Buddy Bolden, the Blues, and the Jews
• The Luxor Baths: A Reminiscence

But the reason is not the one that Reilly suggests in his remarks about “moral relativism.” The gay lobby, like the feminists and anti-white Left, are in no way telling us that morals are relative. They are taking a very definite moral position, which they relentlessly pursue. It consists of turning traditional social mores and biblical morality on their head, in the name of accommodating selective victim groups and punishing those who resist “social justice.” Reilly and I might detest this morality, but those who profess it seem very much committed to it and are eager to make “bigots” pay to whatever degree the state will oblige.

We are now facing a situation that the great German social theorist Max Weber characterized as an “epochal struggle over values.” With the breakdown of traditional social and moral authorities, there has arisen a contest over exactly whose values are to be legitimated. In this contest there are certainly powerful actors, but Robert Reilly and I are not among them. Significantly, the gay lobby has some of these key actors on its side, the administration state, the educational establishment, the princes of social media, and the mainstream and neoconservative media. That is why this lobby that represents a counter-morality is rolling over its opposition. Needless to say, those who exercise the levers of power are not winning because of their superior arguments since, as Reilly easily proves, most of what they trade in are fallacies or outright lies. But what seems undeniable is that those in positions of power, for whatever reasons, have no interest in upholding a traditional moral order.

____________________
Paul Gottfried, paleoconservative philosopher and intellectual historian, was the Raffensberger Professor of Humanities at Elizabethtown College. He is the author of many books, including Leo Strauss and the Conservative Movement in America and Conservatism in America: Making Sense of the American Right.