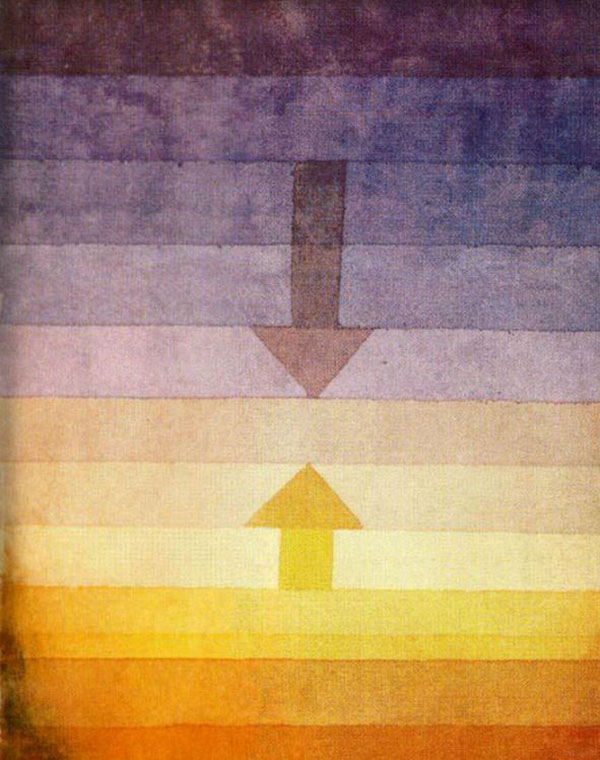 Separation in the Evening, Paul Klee, 1922

There was one metaphorically dark day in June 1901 when the validity of Western logic took a dreadful hit. A mathematician discovered a devastating contradiction involving sets, the simplest idea in maths. It was about two kinds of sets, those which are members of themselves and those which are not. A list of items to be taken to the airport is a set. It may consist of these items: ticket, passport, visa, hotel letter, money, clothes. swimsuit and this list. So there is no doubt that a set can meet its own “membership criterion.”

The mathematician reckoned, however, that most ordinary sets are not members of themselves, so it is natural to call the totality of these “the Normal set.” Then he wondered whether the Normal set was also “normal.” Is the Normal set a member of itself or not?

If it is, it must be “one of these sets which are not members of themselves.”

If it isn’t a member of itself … it is of course exactly one of those sets which the Normal set consists of, so it clearly belongs to the Normal set.

He was getting two full-frontal, brutal contradictions. But there were no other options; a set can’t be “half” a member of itself.

So the simplest logic was telling him that one of two options must necessarily be true, and that both options were also necessarily false (because self-contradictory). How could the necessity of logic land itself in this impossible situation? It was trashing itself, destroying its own credibility.

That mathematician was Bertrand Russell. He was thrown into confusion. There seemed to be no rational explanation. His friend Alfred Whitehead commented “Never bright morning again!” Everyone who considered the question was equally flummoxed. There seemed to be no “mechanism” producing the impasse, which could be searched to find the mistake. It was like looking for a shoe in an empty shoebox. Years passed. It was a bottomless pit of incomprehension. No simple, palpable explanation was ever found so, in the 1920s, the maths establishment pronounced its verdict, an axiom which said

There should have been an outcry, but in the 1920s almost everyone was disillusioned, it was “only maths” after all, and they simply shrugged it off. Western logic and maths had caved in—it was official—but nobody seemed to care.

Western rationality had failed: it was final. There seemed to be no possible way to explain the contradiction. It must be something so deep, so mysterious, that it was beyond human comprehension.

Before that, maths had been regarded by everybody—sensibly—as the bedrock of truth. Its truths were timeless, which meant that they could be checked … ten, a hundred, a thousand times … and the remotest possibility of going wrong could be removed. The truths of maths should be, and were, absolutely certain. Now they weren’t, because there was this deadly question which was destroying any comprehension of sets or simple reasoning. Rationality was indivisible: one point of absolute failure was enough to ruin the whole. It was very bad that no one could find—even a hint of, a glimpse of—an explanation. It was worse that the maths establishment had hushed it up. It was even worse that no one seemed to care.

We have been stumbling along ever since without our former bedrock of truth, and telling ourselves it doesn’t matter. First there were the horrors and dereliction of WW2. After the war, personal behaviour started going shaky. The missing sense of truth, reason and any mental bedrock was taking its toll.

In 1959, another mathematician published a paper in Mind which pin-pointed the solution. It announced a new genre of contradiction—dynamic contradiction. A statement could contradict itself by saying two things which negated each other simultaneously. That was the conventional concept of a contradiction. But there was another way. It could also contradict itself sequentially in a statement like “The word before the penultimate word in this statement should not be there.” This contradicted itself over time, because, if you took away the “not” it was saying that this word should be there … which meant that it was saying again that it should not be there … which meant that it was saying that it should be there … and so on. At no point was it saying two directly opposed things. But what it was saying kept oscillating between opposite poles. This paper was noticed by a few experts including Karl Popper, but the maths establishment turned a blind eye.

Later, in 1993, the same mathematician published a book which showed that there were hundreds of dynamic contradictions sometimes involving oscillations round cycles of 3, 4, 5 or much larger cycles of “partial meanings.” Russell’s Contradiction was a case of this. The book, unsurprisingly, fell stillborn from the press. It was welcomed by a few perceptive experts, including Warwick Sawyer, but the maths establishment didn’t want to know.

Any statement which referred to itself and said that its ascription should be radically changed, would produce a dynamic contradiction if the switched ascription reversed the implication.

We don’t need abstruse reasoning to realise that making ordinary contradictory statements is self-stultifying. Similarly making dynamically contradictory statements is self-stultifying. So the solution of the problem is to do the rational thing and don’t introduce sentences which will provoke an oscillation of conflicting meanings.

How can anyone now draw attention to the much-belated solution of a vital problem which is never talked-about and which has been hushed-up for a hundred years? The maths establishment hates to revoke its axioms, and refuses to question anything it once decided to support. They are mesmerised by the notion of timelessness and seem to have forgotten that their discipline was constructed by human beings in real time. The solution to the problem allows us to go back to having a sense of maths as bedrock truth, something we have long since lost, and which has been dismissed as passe. It is treated as being too far-fetched, too confident by half. We have all been socialised into regarding broken-backed civilisation as being the norm. Perhaps it need not be.

Incidentally that mathematician was the present author, now aged 91.

Christopher Ormell was educated at Magdalen College, Oxford (Demy 1949-54) and was Editor for 26 years of the journal Prospero (co-Editor Patrick Keeney).