The Masque of State 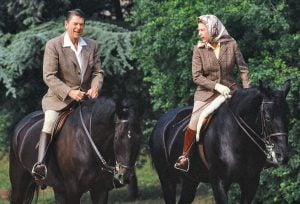 The 30-year rule, by which records of historical interest are made open to the public after30 years, now sheds light on President Reagan’s visit to Britain in 1982. They are particularly revealing on the soft power that so attracted Reagan, above all the ride in Windsor Great Park. That power governed the eight years of the Reagan-Thatcher relationship, which was central to the making of the modern world.

Any State visit is a masque of power, a courtly entertainment born and developed in the 17th century. The State Banquet at Buckingham Palace shows royals and visitors at their best, with an unstated but perfectly clear implication: no other country can do this. It were well to keep on good terms with the people who can lay on a show like this, as Britain did for Reagan. Everyone was on the top of their form and behaved impeccably: the President’s family and retainers were paired with an inexhaustible supply of royals. It was a day they would remember for the rest of their lives. The Queen, the spine of the UK/US relationship, goes back to Herbert Hoover in retirement. She has met every subsequent President and has got on well with each of them.

The great image of power is the ruler on horseback. Throughout history monarchs have been painted on horseback: there’s a superb equestrian painting by Van Dyck of Charles I in the National Gallery.  There is no such sumptuous painting of Queen Elizabeth I, but she loved riding at great speed, and often hunted. It is an elemental truth: the man on horseback is superior, and is seen to be superior, to the man on foot. In military terms, cavalry looked down on infantry.

We now learn that in the negotiations between the Palace and President Reagan, the President held to one demand above all: he wanted to ride with the Queen in Windsor. It was a constant in the negotiations between the two administrations, which had to consider many details besides security; the question of the right horse for the President, for example, was settled deftly, and there was no untoward incident to spoil the picture. Reagan got his way, and saddled up early for an hour’s ride with the Queen. She loves horses, and the event, which a billionaire’s ransom could not have secured, went off well. It was the apotheosis of the relationship between America and Britain. The world saw Monarch and President riding together, to the comfort of both. That image pleased two nations, and it was commonly said that if the Constitution had allowed it, Reagan would have run successfully for a third term. We saw the two symbolic halves of a single people.