The Psychology of Victimhood in the Oppression Olympics 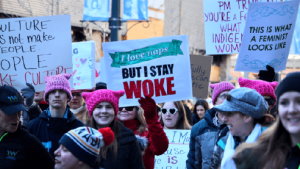 Any psychologist worth his salt can’t help but be mesmerized these days at the bizarre psychological aspects of our current socio-political zeitgeist. Otherwise rational individuals, when it comes to certain topics, demonstrate an irrationality that, if it could be measured with the usual psychometrics, it would be off the scale. Perhaps the most evident, or if one prefers the most oppressive, manifestation is that of projections, the psychological mechanism of attributing one’s negative qualities onto others with a total lack of self-awareness. It has been fascinating to witness.

In the United States, we have seen examples in recent years of large numbers groups and individuals that, in the name of combatting racism, are vigorously proclaiming that all white people are inherently evil, that they all must issue awards and jobs and money to blacks simply for being black, that blacks should not be held accountable for any crimes committed, that preferential treatment in education and jobs must favor blacks, that blacks should be given more voting power as whites, and that financial and medical benefits be given to blacks first and foremost, again just for being black. Additionally, blacks and whites must be segregated in places of learning.

All of this in the name of combatting racism.

And it makes perfect sense to them. They lack even an inkling of self-awareness. As irritating as these declarations may be, they are at the same time truly fascinating to witness.

Similarly, these very same individuals, as they vigorously censor viewpoints and facts that contradict their Weltanschauung, label their political opponents as “fascists” as they create propaganda through “fake news,” destroy all aspects of culture from statues to scientific disciplines and persecute and demonize those persons who disagree with them to the point that they are physically assaulted and/or excluded from employment. Some have openly advocated concentration camps for dissidents, the elimination of an impartial judiciary, as well as advocating one party rule. Liberals demonstrate a deep contempt, if not hatred, for the common people, while they issue hysterical warnings of danger to democracy from their political opponents. A detail that cannot help but cause a certain degree of mirth is that the vicious, leftist Antifa, acting like Stormtroopers, dress all in black, that is, in the same garb as Mussolini’s Blackshirts.

But whereas the above manifestations of projection can be plainly seen, some research psychologists have been quietly carrying out research out of sight into Victimology.

There are a number of societal subgroups with perceived grievances and envisioned benefits so that they have donned the mantle of Victimhood. Initially, Asian-Americans were considered to be a Minority, that is, one of the sacred cows. However, the sacred status of People of Color has been revoked. This has changed towards hostility towards Asians for two reasons: (1) their success in education and in the economy through hard work and merit rather than whining and bitching, prove the “systemic racism” mantra is a lie (2) if they do experience any type of discrimination by whites, they do not seize it as an excuse to riot, burn down buildings, break into stores stealing everything they can carry, and (3) because they have been repeatedly subjected to racist attacks by African–Americans, the top of the Victimology totem pole.

To be seen as a Victim, or to feel that one is a perpetual Victim, has become a status symbol in today’s world (or, if you wish, fashionable). And in order to garner attention and gain benefits, numerous “hate crimes” hoaxes have been carried out (I have compiled a large number of such fake hate crime for the above groups), duplicating the dynamics of fake news. Daniel Greenfield has pointed out that when “hate crimes” hoaxes are perpetrated with blacks as the supposed victims, the real victims in these hoaxes are whites because whites are, once again, being stereotyped as racists; the same principle, of course, is true for fake “hate crimes” against gays on heterosexuals, fake “hate crimes” against Muslims on infidels, fake “hate crimes” against Hispanics on non-Hispanic people, etc. What is fascinating is that, even after the hoaxes are conclusively revealed for what they are, there are still outraged people who will continue to be outraged at what supposedly happened (elsewhere, I have put forth a hypothesis as to why this occurs). Equally fascinating is realizing that there are individuals so eager to believe that hate crimes occur constantly that they will believe a hoax when it is so ridiculously, patently false. Hoaxes provides an opportunity for those neurotics who have made it their life mission to constantly demonstrate to the world their hair-trigger hysterical outrage. Psychologically, they are addicts.

And, in order to receive additional attention and benefits, compounded by a fanatical mindset, the voiced grievances seem to increase in their absurdity, partly due to the fact that, due to the all-prevailing censorship in Western societies, they are not subjected to well-deserved ridicule. A small example of these absurdities are claims that the song Jingle Bells is racist, that sex is not determined by chromosomes, that science should be done through feminist research methodology, that milk is racist, that tamarisk trees are racist, that computers are racist, that Sir Isaac Newton’s Pincipia Matematica dealing with the movement of planets is sexist because it is (obviously!) a rape manual, that E=MC2 is a sexist equation, that Beethoven’s 9th (Choral) Symphony is about rape, that mathematics is racist, that the game Dungeons & Dragons is racist, that animal shelters are bastions of white supremacy and capitalism, while Oxford University, the University of Tennessee and University of Sussex banned the words “he” and “she” for the sake of transgender individuals. Lastly, Rudolph the Red Nose Reindeer is racist. And sexist. And homophobic. The concept of freedom is also a manifestation of white supremacy. The absurdities go on and on. And they all bring to mind George Orwell’s famous observation that, “Some ideas are so stupid that only intellectuals believe them.”

Along with fake hate crimes and fake news, there is also fake history, that is, history which has been falsified, thereby promoting Victimology through the ages. Among countless examples, my bete noir is the one demonizing Christopher Columbus.

One thing is certain: by any standard that one cares to employ, many of these individuals are certifiably psychotic. But, by having donned the mantle of Victimhood, these psychotics are untouchable, they may not be criticized or contradicted, much less ridiculed or committed to a mental health facility (incidentally, some individuals who do not belong to the particular groups that are looked upon as sacred cows can sometimes avoid consequences for their action by adopting the same tactics). Theodore Dalrynmple, as always, puts it succinctly:

The victim is the modern hero and also the highest moral authority: for who would dare to question, let alone oppose, the opinion of a victim on the subject of whatever has made him or her a victim? Thus, we listen to victims with a kind of awed and uncritical, but also terrified, reverence even when they speak of abstractions. If they say something which we suspect or even know to be untrue, we fear to let on to others our derogation from the holy word. To disagree publicly with a victim, to question the undiluted veracity of their story, is to increase the harm they have suffered, and in effect to victimize them a second time.

At any rate, researchers have found some interesting personality traits about the perpetually offended and they confirm what many of us have long suspected. The research literature consistently shows that Victimhood is composed of four related factors: 1) a need for recognition of their suffering and their particular perception of reality, alongside of confirmation of the perpetrator’s guilt 2) a feeling of moral superiority, which leads to controlling others by accusing them of immorality, callousness or indifference 3) lack of empathy, which leads the Victim to behave aggressively towards others compounded by a sense of entitlement 4) obsessiveness and tunnel vision. One particular study indicates that this type of personality construct (which the researchers labeled Tendency for Interpersonal Victimhood) is a stable one, which implies that the chances that Professional Victims will change their views and behavior is unlikely to occur, a dismal prospect for those who have hoped that they would ultimately become rational. Simply put, they are not going to come to their senses.

Another study had a slightly different analysis of the Professional Victim. While echoing many of the observations in previous studies, the researchers emphasized that individuals with the Dark Triad traits of Machiavellianism, Narcissism and Psychopathy tend to frequently signal Victimhood in order to engage in highly unethical, manipulative behavior. Again, it confirms everyday experience.

Somewhat related, albeit peripherally, is another study that found that 62% of white women who identified as very liberal were found to have been diagnosed with mental illness, as contrasted to 26% of conservatives and 20% of moderates. Once more, this confirms everyday experience.

There is an irony in the field of Victimhood which escapes the Professional Victim due, of course to the Victims’ monomania, and that is the recurring instances of individuals falsely presenting themselves as being part of a Victimized subgroup. In other words, persons who claim to be blacks, Native Americans, Hispanics, Australian Aboriginals, or homosexuals/bisexuals have been discovered not to be a member of those sacred cows, but white individuals who posed as minorities in order to obtain the many benefits and/or adulation and/or sympathy that automatically comes to any member of those groups that engages in whining or snarl about being a Victim. Undoubtedly, they also genuinely identify with the particular subgroup. The best-known fake minority is blonde, blue-eyed Senator Elizabeth Warren, who falsely claimed to be Native American, for which action many political and educational doors were opened for her.

Which all of the above begs the questions: are those groups really being victimized?

Are they really “marginalized” as they claim, or are they, instead, “centralized” in society?

And, if America is so racist why are there so many whites pretending to be blacks or Hispanics?

And for that matter, why are there so many hoaxes, in the first place, if “systemic racism” is a reality?

And why, if America such a racist hellhole why are liberals hellbent on having as many nonwhites enter the country?

Armando Simón is a trilingual native of Cuba, a retired psychologist and college professor, and the author of The Book of Many Books, When Evolution Stops and A Prison Mosaic.