The Tune’s the Thing 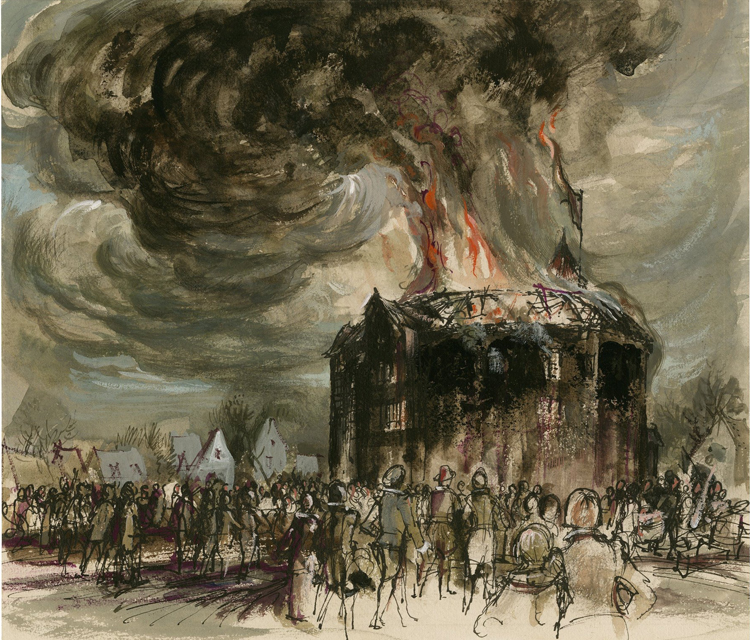 “Fletcher. Hand me down my Holinshed and move the candle closer.”

Fletcher took the English Chronicles from the shelf and passed it.

The recipient accepted the text, put it on the table, and sighed.

“I thought … no, I hoped … they got the message with the last play: let your indulgence set me free! But apparently the King has not.”

“Your tragedies and comedies are still sought.”

“Hah! I myself have to seek them here!” He thumped his chest. “And here!” He tapped his skull. “But I fear the artistry … the wit … the poetry … are running dry. I did not want to end my career as a hack, scrounging rubbish to write the same for groundlings.”

“Please, most of your works are based on old stories and histories. Since when did originality get in your way?”

“True! But only for the bare plots … the titled players. Why waste time retelling tales? Audiences come to see my interpretations, my twists, my insightful characters. To hear the lilt and beauty of my words. That’s innovation!”

“Not to mention the gore and the death scenes.”

“Yes, those, too. Pathos is a terrific draw. And so are the masques: the music, the costumes, the dances.”

“You can’t deny the need to fill seats. You and the company hold shares in the theatre. If the house isn’t prosperous, none of you eat. Your sonnets did well enough with the hornbooks during the plague. But between you and Philip Sidney, the swains have all the wooing words needed. There’s no more market.”

“There are easier ways to make a living. Real estate! I have an apartment in town and back home … on the Avon … I have properties. I can retire from this grinding mill and become a landlord, only inking my fingers signing purchase agreements and court documents.” He reflects a minute. “Or maybe I could return to holding the reins of gentlemen’s horses.”

“Oh, stop fooling and let’s get on with it. The King demands it and you are the King’s Men.”

The playwright ponders his dilemma.

“If there were only some drama … a great clash of arms, a sinister betrayal, a tragic revelation. But there’s nothing! It’s just political propaganda to underscore the legitimacy of the reign from the Tudors to the Stuarts.”

“Well, there were all those wives … the adulteries and beheadings … the troubles with the Pope.”

“Not acceptable! The King wants nothing to rock the Ship-of-State. At best we have a minor scuffle with France, a lavish meeting of rulers, a backdrop of papier-mache castles, and the birth of the sovereign’s daughter, our Virgin Queen.

“Well, if we can’t spice up the writing, maybe we can improve the delivery,” suggested Fletcher.

“Give spectators something they already love … but give them three times as much.”

“You’ve identified it: the masque! Instead of peppering the plot with a few tunes … a couple ‘hey-nonny-nonny’s’ or an ‘O Mistress Mine’ —tell the entire tale in song with a little dialogue to piece it together. Maybe Thomas Tallis would help. Or William Byrd if he can break from his liturgical endeavors. There are armies of untapped songsters in the streets and taverns.”

“And dancing! A mix of court and folk dances. The Pavane and the sprightly Galliard. A Jig and a Roundel. And foreign dances from Spain, Italy and France!”

“And music: violins, viols and lutes, flutes and trumpets, and drums. Didn’t Queen Elizabeth have sixty or seventy musicians in her court?”

“She did! They say Henry VIII wrote “Greensleeves.” But we can’t repeat that rumor since it’s claimed he wrote it to Anne Boleyn.”

“I have just the special effect. Something the audience won’t forget.”

“They’ll be humming the melodies leaving the theatre. Perpetual advertising.”

“The great Masque! No, no … something different, something fresh. The Musical!”

The London Gazette of June 30, 1613, was full of theatre district news. But little copy was dedicated to the trendsetting presentation. It was all about the fire: the burning of the Globe Theatre on Bankside.

The few remarks about pageantry and mode segued to the cannons fired at the end of Act One announcing the King’s stage entrance and the sparks that lit the thatch roof. Contrary to the dramatist’s attendance fears, All is True (later titled Henry VIII) opened to a packed house. So enthralled was the audience, they failed to see the ceiling smoking and when flames reached the wooden trusses and walls, the structure burst into a circular inferno.

Luckily, no one died. But panic ensued when as many as 2,000 people rushed the exits. One man reportedly used a pot-o-ale to douse his smoldering cloak. And within an hour, the entire building seethed in a heap of embers.

Whatever role the avant-garde production played in the tragic blaze, Musicals, too, lay in ashes for 250 years until the performance of The Black Cook in 1866.