The Year of the Plague 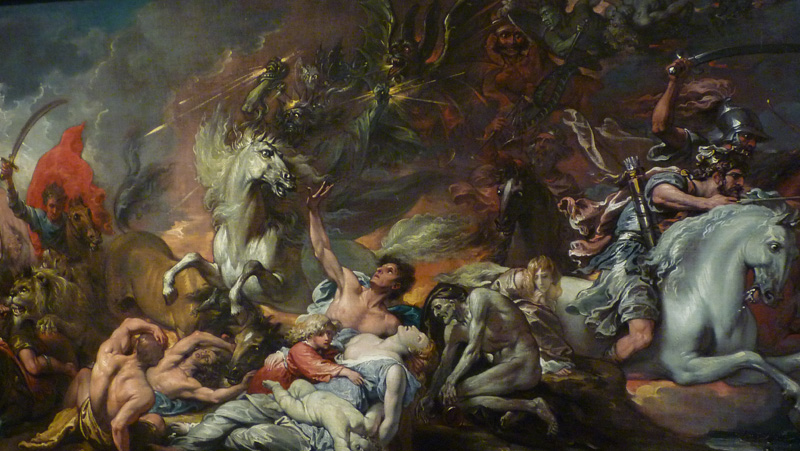 It is not clear that intelligence has any long-term survival value . –Stephen Hawking

Crisis brings out the best and worst in individuals and nations. America is no exception.

Jared Diamond once speculated that our world ends with a whimper or a bang, some heretofore unknown pathogens or a nuclear holocaust. Both futures seem equally real today. With the former, even atheists must now defer to prophets.

A global plague is with us again as we speak.

Death by fire casts an even longer shadow. Indeed, with or without plague, the end is nuclear; if not the bomb, then surely the sun. Eventually, astronomers tell us, like the rest of the solar system, Mother Earth gets torched.

Like Icarus then, all earthly biological life flickers out in an apocalyptic solar flare.

Seems those pagan and biblical metaphors, then, contain more than grains of truth. Religious astronomy, albeit, has always been a little ambiguous. Seems Hell is interplanetary, a specter from above as well as below.

Human history has always been more than a little fantastic; serial voyages from pan to fire. Our behavior might matter marginally in the short term, but if eventually we are all toast, what does it matter?

Dystopians say it matters little. Philosophers beg to differ, usually with assertions about the “uniqueness” or “nobility” of mankind. We are led to believe that the difference between man and monkey is conscience.

Men are reasonable, if not moral. Monkeys and bats are not—or so they say.

If facts matter, the prophets of science and religion should have equal standing. The end for us all, sooner if not later, is still a dead scientific and religious certainty.

Pardon the candor, but science claims that the only real mystery is timeline.

If what we do as a species in the run-up to Armageddon matters, then an apocalyptic event like a pandemic should give us pause examine behavior or any evidence for our nobility, or conscience, as a species.

Early dispatches from the front, the “war” on Covid-19, and the civil war on Trump, are not good.

Indeed, the first pandemic media skirmish in America was about naming rights. First it was the Wuhan flu, then the Chinese virus, alternately the “Kung flu” and now Covid-19, a bug that originated in a Chinese wet market; or the Aberdeen Proving Grounds in Maryland, depending on who you believe.

Scuttlebutt from Fraternity Row even suggested that Corona was something you could get from drinking Mexican beer.

For the moment, thanks to media hysteria, we can agree that the president is a racist if he puts China and Covid-19 in the same sentence.

The plague struck America just as the schoolhouse flushed its charges to the beach for the adolescent mating ritual known as Spring Break. Kung flu did not stop the annual Florida bacchanal nor will it deter student snowflakes from carrying the virus back to parents and grandparents.

So much for youth and conscience.

Not to be outdone by clueless children, Joe Biden, presidential aspirant, became alarmed by daily White House Covid-19 press briefings and created an alternative medical information center in his Delaware basement. With this soap box, Joe Biden hopes to get enough air time to critique, if not undermine, any optimistic messaging from the administration.

Confusion is fungible in an election year. A crisis is indeed a terrible thing to waste. American health and safety have been weaponized. Partisan politics now rides side-saddle with the horsemen.

Adding insult to viral injury, liberal politicians see pathogens as opportunities in the civil war (nee coup) against Donald Trump. Indeed, whilst Senate Republicans hustled to cobble a bill that might provide some immediate human relief and economic stability, House Democrats sought to fashion a bigger Christmas tree. Democrats seek to lard any emergency relief with nonessentials, abortion and millennial debt forgiveness funding among other ornaments.

The banality of funding infanticide in a bill designed to save lives is lost on vapid liberals like Nancy Pelosi.

Ironically, Democrat sinecures on both coasts are most at risk from the Covid-19 pandemic. At the same time, politicians from the coastal urban left continue to obstruct or exploit the legislative process.

America, as we know it, may not survive 2020 in spite of laudable presidential optimism. A civil war, an impeachment, a pandemic, and an election year is a lot of turbulence to navigate. Plague politics, at a gallop, now ride point for the Horsemen of the Apocalypse.

The remainder of 2020 will be a timely test and telling of American national character and “greatness” – a test too of national adjectives like “united.”

Let us pray that we find the better angels of our humanity in the next few months.

PrevThe Bellwether of Modernist Architecture in Britain: The Story of the De La Warr Pavilion
Covid-19, Iran, and the Middle EastNext